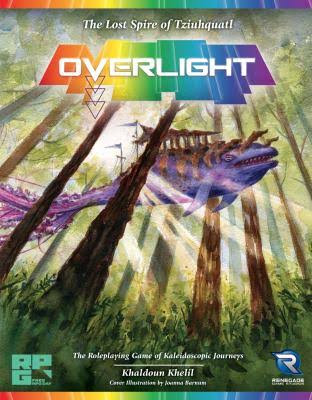 Now in its thirteenth year, Free RPG Day in 2020, after a little delay due to the global COVID-19 pandemic, took place on Saturday, 25th July. As per usual, it came with an array of new and interesting little releases, which traditionally would have been tasters for forthcoming games to be released at GenCon the following August, but others are support for existing RPGs or pieces of gaming ephemera or a quick-start. Again, global events meant that Gen Con itself was not only delayed, but run as a virtual event, and likewise, global events meant that Reviews from R’lyeh could not gain access to the titles released on the day as no friendly local gaming shop was participating nearby. Fortunately, has been able to gain copies of many of the titles released on the day, and so can review them as is the usual practice. To that end, Reviews from R’lyeh wants to thank both Keith Mageau and David Salisbury of Fan Boy 3 in sourcing and providing copies of the Free RPG Day 2020 titles.

The third offering from Renegade Game Studios is The Lost Spire of Tziuhuquatl, a quick-start for Overlight: The Roleplaying Game of Kaleidoscopic Journeys. It presents a full scenario—with room for expansion and development by the Game Master, an explanation of the rules, and four pregenerated Player Characters, all designed to introduce both players and Game Master to the world of Overlight. This is a world of seven great continent, known as Shards, hanging in the sky under each other in a sky of limitless, unending light. These continents may shift horizontally, but never vertically, night only falling when one continent passes over another. Each continent is different, from the rocky towers and crumbling mesas across an expanse of blasted desert that is Nova, home to giant, sentient and meditative centipedes, called Novapendra, to Pyre, a landscape swathed in tundra and steppes, rarely lit beyond the fiery glow of its volcanos. They are home to numerous species, not just Humans or Haarkeen, but also Teryxians, the small, feathered reptilians of Quill, once emperors, but now renowned as academics and philosophers; the tribal, sometimes tree-like Banyan; and the eerily tall and thin, mask-wearing Aurumel of Veile, who aspire to build great things.

To a certain few, the brilliant, white light of the Overlight can split into a spectrum of different colours and Virtues—Compassion (green), Logic (blue), Might (red), Spirit (white), Vigor (orange), Wisdom (purple), and Will (yellow). So with ‘Root!’, a Banyan can encourage the vines and branches in his body to grow and grasp something—a person, an object, the ground—in a particularly tight grip or with ‘Speaker’s Fire’, an Embertongue can influence others in a soothing subtle fashion. The Overlight flows through and around everything, but those who can manipulate it are known as Skyborn and their powers of the Overlight as Chroma.

A character in Overlight and thus The Lost Spire of Tziuhuquatl is defined by the seven Virtues—Compassion, Logic, Might, Spirit, Vigor, Wisdom, and Will. Most Virtues have Virtue has two or skills attached to it and both skills and Virtues are rated by die type. The exception is Spirit, which is just a pool of points for activating Chroma. Besides a name, a character will also be defined by his Folk—species and culture, core Virtue, a background, and wealth. To undertake an action, a character’s player rolls a Test, which depending upon the circumstances can be a Skill Test, an Open test, a Wealth Test, or a Chroma Test. For any Test, the player rolls seven dice, usually consisting of three dice equal to the character’s skill, three equal to his Virtue, plus the Spirit die, which is always four-sided die. For example, a Banyari faced by an angry animal which he wants to calm down, his player would roll three ten-sided ice for his Compassion Virtue, three six-sided dice for his Beastways skill, plus the Spirit die. Results of six or more count as a success and at least two successes are required to succeed at a Test, though without any flourish. A roll of four—or Spirit Flare—on the Spirit die can add a further success. The type of dice rolled varies depending upon the type of Test, but all are built around a pool of seven dice. For example, Chroma Tests, used to active Chroma abilities, typically use a combination of two Virtues plus the Spirit die—and it is the result on the Spirit die which determines how many Spirit points activating the Chroma costs. If it is too many and the character is low on Spirit points, the character suffers a Shatter as the raw divinity of the Overlight powers through him. This can lead to strange side effects and once a character has suffered his third Shatter for a Chroma, he is burnt out and cannot use that Chroma again. Overall, the rules in The Lost Spire of Tziuhuquatl are succinctly described in just seven pages, including the skills list.

Four pre-generated characters are provided to play the scenario in The Lost Spire of Tziuhuquatl. They include a Banyari Rootlord capable of using the Overlight to photosynthesise healing, grasp others with its vines and branches, or lash out in a fury of red fists and spectral fire; a Pyroi Embertongue capable of making friends and influencing others, and creating fire; a Haarken Grifter capable of hearing conversations at a distance; and a Teryxian Tutor capable of issuing uncompromising commands. Every character comes with three or pages of backgrounds and stats.

The scenario in The Lost Spire of Tziuhuquatl is the eponymous ‘The Lost Spire of Tziuhuquatl’. This is a four-act mystery and missing persons adventure, which offers a mix of horror and exploration as well combat and interaction. It takes place on the on the forested Shard of Banyan where the Player Characters come across The Aquila, a ship-beast known as a Chrysoara, stricken with a sickness, its crew dead from acts of self-inflicted violence. This may simply at random, or they may be going to the rescue of the crashed ship-beast, or they may look for a missing scholar, Zubidiah Molok, who may or not be known to one of the Player Characters, and who even be mentor to one of them. From clues aboard The Aquila, the Player Characters will learn that scholar has made a great discovery deep in the forest. Following these clues will lead the Player Characters into dangerous territory and reveal some of the secrets of Overlight’s past.

As a scenario, ‘The Lost Spire of Tziuhuquatl’ is okay. It presents some of the setting to Overlight: The Roleplaying Game of Kaleidoscopic Journeys and it provides a good mix of action and investigation, interaction and exploration, combat and horror. Each of the four Player Characters should certainly have a chance to shine. However, because the setting for Overlight: The Roleplaying Game of Kaleidoscopic Journeys, and thus, ‘The Lost Spire of Tziuhuquatl’, is different, this scenario is not going to be one that flows. There will be plenty of stops and starts along the way as the Game Master has to explain—if not the rules, for they are quite straightforward, then aspect after aspect of the setting. As a quick-start, The Lost Spire of Tziuhuquatl needs a cheat-sheet for it background more than it does for its mechanics. That said, from the information contained in its pages, the Game Master should be able to create one, just as she will be able to create the maps that would have been useful to frame and reference ‘The Lost Spire of Tziuhuquatl’. Of course, if she is doing that, then a handout or two would make the scenario a whole lot easier for both Game Master and her players.

Physically, The Lost Spire of Tziuhuquatl is well presented. It is decently written, full colour, and comes with nice artwork. The lack of maps is an issue, but more of a problem is the fact that what is probably meant to be read aloud purple prose is not clearly marked as such and it feels like the author is repeating himself with every location description. This is frustrating experience for the Game Master trying to use the descriptions—both in the purple prose and the write-ups intended for her, because they look the same.