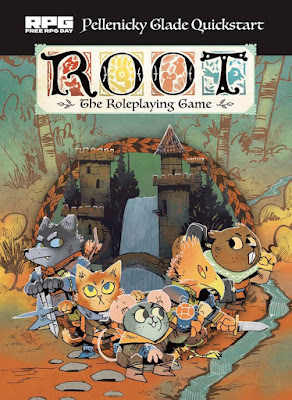 Now in its thirteenth year, Free RPG Day in 2020, after a little delay due to the global COVID-19 pandemic, took place on Saturday, 25th July. As per usual, it came with an array of new and interesting little releases, which traditionally would have been tasters for forthcoming games to be released at GenCon the following August, but others are support for existing RPGs or pieces of gaming ephemera or a quick-start. Again, global events meant that Gen Con itself was not only delayed, but run as a virtual event, and likewise, global events meant that Reviews from R’lyeh could not gain access to the titles released on the day as no friendly local gaming shop was participating nearby. Fortunately, Reviews from R’lyeh has been able to gain copies of many of the titles released on the day, and so can review them as is the usual practice. To that end, Reviews from R’lyeh wants to thank both Keith Mageau and David Salisbury of Fan Boy 3 in sourcing and providing copies of the Free RPG Day 2020 titles.

Published by Magpie Games, Root: The Tabletop Roleplaying Game is a roleplaying game based on the award-winning Root: A Game of Woodland Might & Right board game, about conflict and power, featuring struggles between cats, birds, mice, and more. The Woodland consists of dense forest interspersed by ‘Clearings’ where its many inhabitants—dominated by foxes, mice, rabbits, and birds live, work, and trade from their villages. Birds can also be found spread out in the canopy throughout the forest. Recently, the Woodland was thrown into chaos when the ruling Eyrie Dynasties tore themselves apart in a civil war and left power vacuums throughout the Woodland. With no single governing power, the many Clearings of the Woodland have coped as best they can—or not at all, but many fell under the sway or the occupation of the forces of the Marquise de Cat, leader of an industrious empire from far away. More recently, the civil war between the Eyrie Dynasties has ended and is regroupings its forces to retake its ancestral domains, whilst other denizens of the Woodland, wanting to be free of both the Marquisate and the Eyrie Dynasties, have formed the Woodland Alliance and secretly foment for independence.

Between the Clearings and the Paths which connect them, creatures, individuals, and bands live in the dense, often dangerous forest. Amongst these are the Vagabonds—exiles, outcasts, strangers, oddities, idealists, rebels, criminals, freethinkers. They are hardened to the toughness of life in the forest, but whilst some turn to crime and banditry, others come to Clearings to trade, work, and sometimes take jobs that no other upstanding citizens of any Clearing would do—or have the skill to undertake. Of course, in Root: The Tabletop Roleplaying Game, Vagabonds are the Player Characters.

Root: The Tabletop Roleplaying Game is ‘Powered by the Apocalypse’, the mechanics based on the award-winning post-apocalyptic roleplaying game, Apocalypse World, published by Lumpley Games in 2010. At the heart of these mechanics are Playbooks and their sets of Moves. Now, Playbooks are really Player Characters and their character sheets, and Moves are actions, skills, and knowledges, and every Playbook is a collection of Moves. Some of these Moves are generic in nature, such as ‘Persuade an NPC’ or ‘Attempt a Roguish Feat’, and every Player Character or Vagabond can attempt them. Others are particular to a Playbook, for example, ‘Silent Paws’ for a Ranger Vagabond or ‘Arsonist’ for the Scoundrel Vagabond.

So for example, if a Player Character wants to ‘Read a Tense Situation’, his player is rolling to have his character learn the answers to questions such as ‘What’s my best way out/in/through?’, ‘Who or what is the biggest threat?’, ‘Who or what is most vulnerable to me?’, ‘What should I be on the lookout for?’, or ‘Who is in control here?’. To make the Move, the player rolls the dice and his character’s Cunning to the result. On a result of ten or more, the player can ask three of these questions, whilst on a result of seven, eight, or nine, he only gets to ask one.

Moves particular to a Playbook can add to an attribute, such as ‘Master Thief’, which adds one to a character’s Finesse or allow another attribute to be substituted for a particular Move, for example, ‘Threatening Visage’, which enables a Player Character to use his Might instead of Charm when using open threats or naked steel on attempts to ‘Persuade an NPC’. Others are fully detailed Moves, such as ‘Guardian’. When a Player Character wants to defend someone or something from an immediate NPC or environmental threat, his player rolls the character’s Might in a test. The Move gives three possible benefits—‘ Draw the attention of the threat; they focus on you now’, ‘Put the threat in a vulnerable spot; take +1 forward to counterstrike’, and ‘Push the threat back; you and your protected have a chance to manoeuvre or flee’. On a successful roll of ten or more, the character keeps them safe and his player cans elect one of the three benefits’; on a result of seven, eight, or nine, the Player Character is either exposed to the danger or the situation is escalated; and on a roll of six or less, the Player Character suffers the full brunt of the blow intended for his protected, and the threat has the Player Character where it wants him.

The release for Free RPG Day 2020 for Root: The Tabletop Roleplaying Game is Root: The Pellenicky Glade Quickstart. It includes an explanation of the core rules, six pregenerated Player Characters or Vagabonds and their Playbooks, and a complete setting or Clearing for them to explore. From the overview of the game and an explanation of the characters to playing the game and its many Moves, the Root: The Tabletop Roleplaying Game is Root: The Pellenicky Glade Quickstart is well-written. It is notable that all of the Vagabonds are essentially roguish in nature, so in addition to the Basic Moves, such as ‘Figure Someone Out’, ‘Persuade an NPC’, ‘Trick an NPC’, ‘Trust Fate’, and ‘Wreck Something’, they can ‘Attempt a Roguish Feat’. This covers Acrobatics, Blindside, Counterfeit, Disable Device, Hide, Pick Lock, Pick Pocket, Sleight of Hand, and Sneak. Each of these requires an associated Feat to attempt, and each of the six pregenerated Vagabonds has one, two, or more of the Feats depending just how roguish they are. Otherwise, a Vagabond’s player rolls the ‘Trust to Fate’ Move.

The six pregenerated Vagabonds include Ellora The Arbiter, a powerful Badger warrior devoted to what she thinks is right and just; Quinn The Ranger, a rugged Wolf denizen who left the Woodland proper to escape the war and their past as an Eyrie soldier; Scratch The Scoundrel, a Cat troublemaker, arsonist, and destroyer; Nimble The Thief, a clever and stealthy Raccoon burglar or pickpocket who is on the run from the law; Keilee The Tinker, a Beaver and technically savvy maker of equipment and machines; and Xander The Vagrant, a wandering rabble-rouser and trickster Opossum who survives on his words. Most of these Vagabonds have links to the given Clearing in Root: The Pellenicky Glade Quickstart and all are complete with Natures and Drives, stats, backgrounds, Moves, Feats, and equipment. All a player has to do is decide on a couple of connections and each Playbook is ready to play.

As its title suggests, the given Clearing in Root: The Pellenicky Glade Quickstart is Pellenicky Glade. Its description comes with an overarching issue and conflicts within the Clearing, important NPCs, places to go, and more. The overarching issue is the independence of the Clearing. The Goshawk have managed to remain neutral in the Eyrie Dynasties civil war and in the face of the advance of Marquisate forces, but the future is uncertain. The Conflicts include the future leadership of the Denizens of Pellenicky Glade, made all the more uncertain by the murder of Alton Goshawk, the Mayor of Pellenicky Glade. There is advice on how these Conflicts might play out if the Vagabonds do not get involved and there are no set solutions to any of the situations. For example, there is no given culprit for the murder of Alton Goshawk, but several solutions are given. Pellenicky Glade is a scenario in the true meaning—a set-up and situation ready for the Vagabonds to enter into and explore, rather than a plot and set of encounters and the like. There is a lot of detail here and playing through the Pellenicky Glade Clearing should provide multiple sessions’ worth of play.

Physically, Root: The Pellenicky Glade Quickstart is a fantastic looking booklet, done in full colour and printed on heavy paper stock. It is well written and the artwork, taken from or inspired by the Root: A Game of Woodland Might & Right board game, is bright and breezy, and really attractive. Even cute. Simply, Root: The Pellenicky Glade Quickstart is physically the most impressive of all the releases for Free RPG Day 2020.

If there is an issue with Root: The Pellenicky Glade Quickstart it is that it looks busy and it looks complex—something that often besets ‘Powered by the Apocalypse’ roleplaying games. Not only do players need their Vagabond’s Playbooks, but also reference sheets for all of the game’s Basic Moves and Weapon Moves—and that is a lot of information. However, it means that a player has all of the information he needs to play his Vagabond to hand, he does not need to refer to the rules for explanations of the rules or his Vagabond’s Moves. That also means that there is some preparation required to make sure that each player has the lists of Moves his Vagabond needs. Another issue is that the relative complexity and the density of the information in Root: The Pellenicky Glade Quickstart means that it is not a beginner’s game and the Game Master will need a bit of experience to run the Pellenicky Glade and its conflicts.

Ultimately, Root: The Pellenicky Glade Quickstart comes with everything necessary to play and keep the attention of a playing group for probably three or four sessions. Although it needs a careful read through and preparation by the Game Master, Root: The Pellenicky Glade Quickstart is a very good introduction to the rules, the setting, and conflicts in Root: The Tabletop Roleplaying Game—and it looks damned good too.