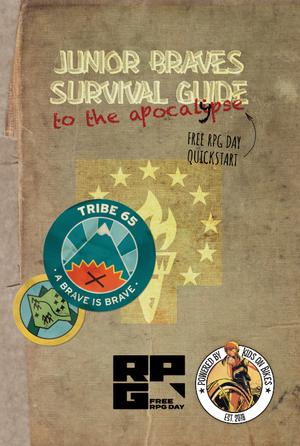 Now in its thirteenth year, Free RPG Day in 2020, after a little delay due to the global COVID-19 pandemic, took place on Saturday, 25th July. As per usual, it came with an array of new and interesting little releases, which traditionally would have been tasters for forthcoming games to be released at GenCon the following August, but others are support for existing RPGs or pieces of gaming ephemera or a quick-start. Again, global events meant that Gen Con itself was not only delayed, but run as a virtual event, and likewise, global events meant that Reviews from R’lyeh could not gain access to the titles released on the day as no friendly local gaming shop was participating nearby. Fortunately, Reviews from R’lyeh has been able to gain copies of many of the titles released on the day, and so can review them as is the usual practice. To that end, Reviews from R’lyeh wants to thank both Keith Mageau and David Salisbury of Fan Boy 3 in sourcing and providing copies of the Free RPG Day 2020 titles.

The Junior Braves Survival Guide to the Apocalypse Quick-Start comes nicely complete. It includes a good explanation of the rules, six pregenerated Player Characters, and a sandbox ready for a group to play. In this way, it is complete and presents a ready-to-play package in a way which Kids on Brooms failed to be.
Instead of character generation, the Junior Braves Survival Guide to the Apocalypse Quick-Start includes six Tropes—or basic character types. These are Honcho, Rustic, Ruffian, Tinkerer, Dreamer, and Tribe Master—the latter the leader of the troupe whom the Game Master roleplays as well as the NPCs. Each of these has its own special ability. For example, when the Dreamer earns a Brave Token—the equivalent of luck points or tokens—his player must give one to another Junior Brave, and the Ruffian gains a +3 bonus to solve problems involving force or chutzpah when his player spends a Brave Token. As per Kids on Bikes, each Junior Brave is defined by six stats—Brains, Brawn, Charm, Fight, Flight, and Grit—to which are attached to a die type, from a twenty-sided die for the character’s best stat down to a four-sided die for his worst stat. The ten-sided die represents an above average stat, whereas an eight-sided die represents a below average stat. So, a Honcho has a Charm d20, Fight d12, Grit d10, Brawn d8, Brains d6, and Flight d4, and a Rustic has Brawn d20, Charm d12, Flight d10, Brains d8, Fight d6, and Grit d4.

Tropes in the Junior Braves Survival Guide to the Apocalypse and thus the quick-start do not have skills, but in keeping with the theme of the game, they have Skill Patches, each sewn onto their Skill Sashes. Example Skill Patches include Orienteering, Woodworking, Knots & Ropes, Radios & Codes, and Sign Language. Each of these grants a +3 bonus to skill rolls—or possibly +1 bonus if only tangentially relevant. A Junior Brave will also have a Flaw, which can complicate his actions and increase the Target his player needs beat on a die roll. If a Junior Brave fails a roll due to his Flaw, he earns two Brave Tokens rather than the one usually awarded for failure. Lastly, a Junior Brave has some equipment and gear, stored in his ‘Pack and Pockets’. These consist of a pocketknife, sleeping bag, and a canteen, plus three items he would have had with him on the camp. Some of these are limited use items and will likely run out during the adventure included in Junior Braves Survival Guide to the Apocalypse Quick-Start.

Mechanically, the Junior Braves Survival Guide to the Apocalypse Quick-Start uses the same mechanics as Kids on Bikes, Teens in Space, and Kids on Brooms, with each of a Junior Brave’s stats being represented by a single die type. For a Junior Brave to do something, his player rolls the appropriate die for his Trope’s stat and attempts to roll over a difficulty number set by the Game Master, for example, between ten and twelve for an impressive task that a skilled person should be able to do. A player can add a +3 bonus if his Junior Scout has an appropriate Skill Patch and a +1 bonus for any Brave Tokens he wants to spend—or his fellow players want to spend if their Junior Braves are collaborating. However, complications increase the difficulty of the target number by three for each one. If the die roll beats the difficulty number, the Junior Scout succeeds, but if the roll is equal to the difficulty number, then he succeeds at cost, as in ‘Yes, but…’. It should be noted that the mechanics in Junior Braves Survival Guide to the Apocalypse Quick-Start that player-facing in that only the player roll dice—the Game Master never does.

A potential cost of failure is Stress and Trauma. Stress typically consists of bruises, cuts, scrapes, panic attacks, depression, and other forms of distress. Stress can add a complication to an action, but overnight rest or reassurance can get rid of Stress. However, should a Junior Brave suffer more than four Stress, he suffers from a Trauma. This represents serious injury or distress and until the Junior Brave recovers—which takes either medical treatment or weeks of rest—he cannot use one of his Stats.

Rounding out Junior Braves Survival Guide to the Apocalypse Quick-Start is a complete set of starting characters, as well as ‘Perils at the Pit-Stop’, a complete campaign starter. The Junior Braves return home from camp and taking a break from the journey in the town of Penelope, discover the clerk at the gas station was dead and zombie-like. What has happened and is it like the zombie television show the Junior Braves are definitely not allowed to watch? ‘Perils at the Pit-Stop’ includes a full description of the town, its current factions, and hints at some of the mysteries going in within its boundaries. It is essentially a mini-sandbox, a place for the Junior Braves to explore and make discoveries, and so there is no single defined plot or outcome, though there are several Troubles which they will encounter.

Physically, the Junior Braves Survival Guide to the Apocalypse Quick-Start is a simple black and white booklet. It is well written, the artwork is good, and the map nicely done.