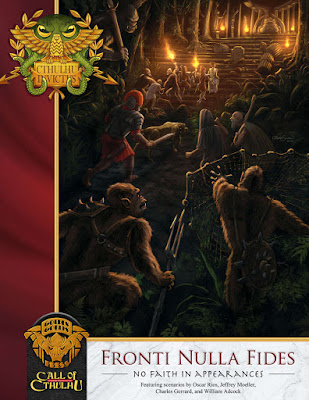 Fronti Nulla Fides—or ‘there is no trusting appearances’—is an anthology of six scenarios for The 7th Edition Guide to Cthulhu Invictus: Cosmic Horror Roleplaying in Ancient Rome using Call of Cthulhu, Seventh Edition. Published by Golden Goblin Press, this setting presents new challenges in investigating and confronting the Mythos in Lovecraftian investigative roleplaying, shorn of its reliance upon libraries, newspaper archives, and Mythos tomes, instead requiring the investigators to ask others lots and lots of questions, do an awful lot of watching, and sneak about a fair bit. In other words, more detective legwork rather than research. Similarly, the reliance upon firearms found in conducting investigations in the Jazz Age of the 1920s, makes such investigations and confrontations with the Mythos more fraught affairs. The sextet in Fronti Nulla Fides see the investigators conducting a raid on a house of tinkers, a rescue mission to a city of white apes, a terrible sea journey, and in turn, hunts for a slave, a dragon, and a barbarian.

The anthology opens with ‘The Clockwork Oracle’, the first of three contributions by  publisher Oscar Rios. This is set in Corinth in Greece—though it could easily be moved to another city—and has the Investigators hired by a trio of brothers and sisters whose father has become obsessed with mechanisms and clockwork devices, in particular, a mechanical jay known as The Clockwork Oracle, which he believes can tell the future. This obsession has grown to the point that he is spending much of his wealth upon them, has allowed a gifted tinker to move into his home, and when confronted by his children, threw them out of the house. Amongst other things, siblings want the tinker removed from the house, their father separated from The Clockwork Oracle, both him and the household slaves kept safe, their family’s financial records secured, and more. Of these other objectives, each of the siblings has his or own objective and the scenario divides them between the Investigators, so adding a slight divisive element when it comes to the scenario’s set piece. Oddly, the biggest challenge in the scenario for the Keeper is portraying the squabbling siblings as they talk across each other, but otherwise this a short and straightforward scenario that provides an opportunity for the Investigators to conduct some classic detective work before the scenario’s grand set piece—the raid on the house. Here the scenario is almost Dungeons & Dragons-like, with much more of an emphasis on stealth and combat in comparison to scenarios for Call of Cthulhu, but this should make for a fun change of pace. The scenario also has numerous different aspects to its outcome which will need to be worked through, depending upon how successful the Investigators have been. Overall, ‘The Clockwork Oracle’ has a two-fisted muscularity to it, but still packs in plenty of story.

Jeffrey Moeller’s ‘Goddess of the White Apes’ is a sequel to his ‘The Vetting of Marius Asina’ from De Horrore Cosmico. ‘The Vetting of Marius Asina’ is an interpretation of ‘Facts Concerning the Late Arthur Jermyn and his Family’ in which the Investigators look into the background of Marius Asina to determine if he is suitable for elevation beyond his current rank of senator. Of course, he was not, since neither Marius Asina nor his family turned out to human, let alone barely Roman citizens! ‘Goddess of the White Apes’ leans into the pulpiness of the ‘Swords & Sandals’ genre, but combines it with weird miscegenation and horror, as the Investigators are directed to rescue from the nephew of the emperor from a city to the far south beyond the furthest reaches of the empire. There they find a city which is rapidly coming to ape Rome itself as the leader of the White Apes attempts to make both their home and their society more ‘civilised’! Here the Investigators—after the travails of their long journey south (though a means of cutting the journey time is explored)—must deal with a leader more capricious than a Roman Emperor and effect an escape. The set-up of ‘Goddess of the White Apes’ allows it to be run as a standalone scenario, but it works better as a sequel to ‘The Vetting of Marius Asina’.

Whether as crew or passengers, the Investigators find themselves in peril at sea in Charles Gerard’s ‘Following Seas’. As they sail aboard the Minerva from Antioch in Syria Palestina to Ostia, the port which serves Rome, the ship’s captain veers between depression and irrationality, his mood and actions upsetting the crew as strange energies are seen to swirl about the ship’s rigging. Both investigation and action will take place aboard the Minerva in what is classic, ‘ship in a bottle’ scenario, one that quickly pushes its narrative to an action-packed dénouement. Along the way, there is room for unsettling flashbacks, either ones which have happened in earlier encounters with the Mythos or ones which each player can create for their Investigator on the spot. ‘Following Seas’ is a decent scenario, one which is easily run as the Investigators are travelling between locations—perhaps in a campaign, perhaps between other scenarios, and which can easily be transferred to times and locations which involve sailing ships and sea voyages.

Oscar Rios’ second scenario is ‘Manumission’, in which Rome’s practice of slavery is put to a vile purpose. A vigilis—the equivalent of the police in the Roman Empire, comes to the Investigators for their help. In fact, he comes to them for their help because they owe him a favour or two, so ‘Manumission’ works best later in a campaign when the Investigators who have had a run in with the authorities. The vigilis wants them to help a friend of his whose nephew has been sold into slavery by his drunkard father. Quick investigation reveals that the boy has already been sold and the buyer is not prepared to sell him back. In order to rescue the boy, the Investigators will have to follow the seller and perhaps steal him back. However, in the process, they will discover why the boy was sold and that adds a degree of urgency to the rescue attempt. This is a solid piece of nastiness, nicely set up and waiting for the Investigator to do the right thing.

‘The Dragon of Cambria’ by William Adcock takes the Investigators to the west of Britannia and into Wales where a rich lead mine has unleashed a dragon! This is a classic monster hunt in Dungeons & Dragons-style, but one scaled to Call of Cthulhu, Seventh Edition, which means that the Investigators are likely to be snapped up in a straight fight between themselves and the creature. They will have to use their guile and planning to defeat the creature, though their efforts are likely to be hindered by rival hunters and locals interpreting the appearance of the dragon as heralding a rebellion against the Roman authorities.

Lastly, Oscar Rios’ third scenario takes the Investigators to the province of Germania Superior and beyond! In ‘The Blood Sword of Emeric’, a German tribal leader has risen in rebellion and is attacking locals and Romans alike, but is said to have a blood red sword capable of killing at a single cut and slicing through chainmail. Whether as agents employed by a merchant to recover a missing shipment, the head of a local fort beset by refugees wanting someone to bring him the head of Emeric, or even as agents of an occult society interested in rumours of the sword, the Investigators will need to get what information they can from the refugees, find a guide, and strike out beyond the frontier. The scenario is again quite straightforward and quite action orientated, but it does a nice bait and switch on the Investigators—not once, but twice!

Physically, Fronti Nulla Fides is well presented and edited. Each scenario begins with a full list of its NPCs and each scenario’s maps are generally good, and the illustrations, although having a slightly cartoonish feel to them, are excellent throughout.

Each of the six scenarios in Fronti Nulla Fides should take no longer than a session or two to play, each is different, and even despite their being quite short, time is taken to explore the possible outcomes and ramifications of each. Their length also makes them easy to fit into an ongoing campaign, either between longer, more involved scenarios or chapters of an actual campaign. They also provide a decent amount of physical and interpersonal investigation, showcasing just how rare it is that Lovecraftian investigating roleplaying at the height of the Roman Empire rarely involves visits to libraries or poring over Mythos tomes. Overall, Fronti Nulla Fides not only lives up to its title, but also provides the Keeper of a Cthulhu Invictus campaign with a set of six short, but enjoyably action-orientated and punchy scenarios.