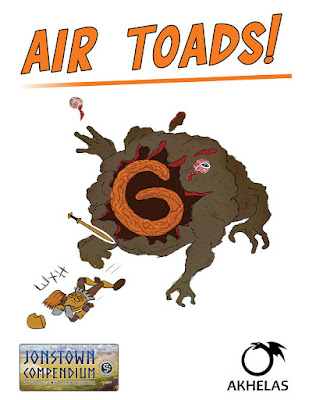 What is it?
Monster of the Month #11: Air Toads! presents a sort of inflatable batrachian bomb with which to confound your Player Characters for use with RuneQuest: Roleplaying in Glorantha.
It is an thirteen-page, full colour, 1.24 MB PDF.
The layout is clean and tidy, and the illustrations reasonable.

Where is it set?
Monster of the Month #11: Air Toads! can be set almost anywhere, but particularly where Cliff Toads may also be found.
Who do you play?
No specific character types are required when encountering Monster of the Month #11: Air Toads!. Having a hunter amongst the party may be useful and the likelihood is that any Eurmali will enjoy the possibility of an encounter with these creatures going off with a bang!
What do you need?
Monster of the Month #11: Air Toads! requires RuneQuest: Roleplaying in Glorantha. The RuneQuest: Glorantha Bestiary will also useful for details of Cliff Toads.
What do you get?
Monster of the Month #11: Air Toads! provides the Game Master with an utterly weird, almost confounding, certainly ridiculous monster. A toad, that like its Cliff Toad cousin, can look like a rock and squeeze its way through relatively narrow cracks and crevices, has a long tongue it uses to capture and then swallow its prey, but if punctured, can explode with a big whoosh of air and a bang! And not only that, but can inflate and float away into the sky!
The Air Toad is likely to be more nuisance than threat per se, but it is still dangerous and if being hunted or simply found in the area where the Player Characters are, then any attempt at stealth is likely to be thwarted should one or more of them explode. Besides being a nuisance though, Air Toads are valued for their body parts. Their eyes, for example, all three of them—which enable an adult Air Toad to see in every direction and thus make it very hard to sneak up on—are valued by sorcerers for their use in illusion spells, whilst alchemists use them to make floatwine, an intoxicating concoction that enables the imbiber to fly! However, recovery of such parts require that the Air Toad has not exploded and that needs bludgeoning weapons. Thus for many Player Characters, with their reliance on piercing and slashing weapons, going on an Air Toad hunt is a whole other challenge...
As well as its stats and biology, Monster of the Month #11: Air Toads! gives the Mythos & History for the Air Toad—unsurprisingly given the absurdity of the creature, Eurmal was involved—as well as adventure seeds (mostly as nuisance and prey for the hunt), a table of rumours, and a discussion of the different perspectives that other races have on the Air Toad. Notably, in Prax, this includes the Cult of the Storm Bull-Frog, a relatively temporary spirit cult, allied with Storm Bull, which dedicates it itself to the care and worship of a particular Air Toad. Along the way there is some scholarly discussion of the creature which adds another perspective or two and so should engage any Grey Beard amongst the Player Characters upon the subject.
Is it worth your time?
Yes—Monster of the Month #11: Air Toads! presents toads which go bang, and who would deny that the levity of their game would not be improved with the addition of batrachian bombs?
No—Monster of the Month #11: Air Toads! is a ridiculous idea. Honestly, who thought of such a thing?
Maybe—Monster of the Month #11: Air Toads! is relatively easy to use, but the absurdity of it may change the tone of a campaign and even then, such batrachian bombs are not something that you can include too often in a campaign. It definitely falls under ‘Your Glorantha Will Vary’ and it may even fall under ‘Your Glorantha Will Really Vary’.
Posted by pookie at 12:00