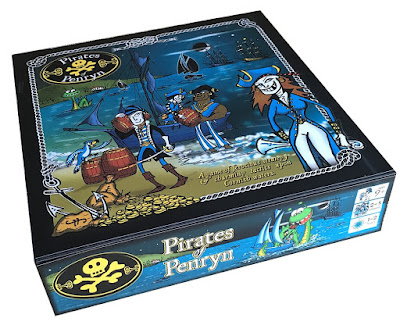 Published by SeaGriffin Games following a successful Kickstarter campaign, Pirates of Penryn – A game of Charm & Ferocity Upon Cornish Waters is a game of rum running on the Cornish coast in the eighteenth century. Designed for between two and five players—or Captains, aged nine and up, each takes command of two ships. One is a galleon, loaded down with rum, ready to smuggle up the Penryn River to the towns of Falmouth, Flushing, and Penryn, where a good price can be fetched for the illegal liquor. However, the waters of the Penryn River are too shallow for the galleon, so they must send their other vessel, the smaller RumRunner ashore with the illicit cargo. They must brave the dangerous waters with their whirlpools which bring as much good fortune as they do bad, avoid the piggish predations of dread sea serpent Morgawr, take advantage of the wind the best that they can, and avoid getting caught aground when the tide ebbs away to sea. Perhaps they will be able to sail all the way up the Penryn River to Penryn itself where they are bound to get a good price for their rum, but the waters are dread shallow the further up the river you go, and on the way back to their galleon, there is every likelihood that your RumRunner will be attacked by a rival crew, ready to steal the monies made! If a Captain can successfully empty all the rum aboard his galleon, sell as much as he can, and have his RumRunner return—hopefully with florins aplenty—then he can declare the end of the game. The winner will be the Captain with most florins aboard his galleon.

The very first thing that you notice about the Pirates of Penryn is the art. Its style echoes that of Oliver Postgate and Peter Firmin, of their series Ivor the Engine and Noggin the Nog. However, it is brasher in style, more cartoonish, and not as charming, and worse suggests that Pirates of Penryn is a game for children. Whilst there are rules for playing with younger Captains, the standard game of Pirates of Penryn is not for children. Combining hand management mechanics with a pickup and deliver mechanic, Pirates of Penryn can be a cutthroat race for gold, one in which the Captains can raid their rival RumRunners and engage in skirmishes and duels with them, sneak in Morgawr’s cave and steal from her hoard, all before racing back to their galleons. Play lasts about an hour or so, and is much more fun with more Captains than with fewer.

The very first thing you notice upon opening Pirates of Penryn is the board, or ‘sailcloth’ map of Penryn River. In fact, this is a neoprene cloth, done in full colour which depicts Penryn River marked in squares—thankfully movement is both orthogonal and diagonal rather than just orthogonal—in three shades of blue. The deeper the shade of blue, the deeper the water. Close into the shore and on several sandbanks, there are areas where a RumRunner may find itself run aground, forcing its Captain to miss a turn or two until the flow of the tide back up the river refloats the boat. Some of these low-lying areas will also deny a Captain access to Flushing and Penryn. Dotted up and down the river are a number of whirlpools—of varying size, and crossing one of these may bring a RumRunner a boon, but it may also place it in peril. The actual playing surface is actually quite small—or narrow, and the waters of the Penryn River become tighter and tighter the more Captains there are playing.

Along the coast are three towns—in ascending value of the florins they will pay for rum, of Falmouth, Flushing, and Penryn, as well as the smuggler’s haven of Ponsharden where new members of crew can be press ganged into service aboard a RumRunner. Also along the coast is Morgawr’s cave, the sea serpent who can be drawn out into Penryn River with a sacrifice of a crewmember and sent into the path of a rival RumRunner, and if a RumRunner does get too close, will snap pirates and florins from aboard the vessel and secret them away in her lair. Later on, and if Morgawr is away from her cave, then a Captain can sail his RumRunner into her cave and raid her treasure hoard! Around the edge of the board are spaces for the game’s cards—sold cargo, Morgawr’s hoard, whirlpools, crewmembers, and florins. One roundel tracks the direction of the wind, whilst another the ebb and flow of the tide.

The other components include four decks of cards—sixty crew cards, sixty cargo cards, ninety florin cards, and forty-two whirlpool cards. All of the crew cards are individualised with illustrations and a bit of biographical trivia. The trivia can easily add some table talk and a little roleplaying if a Captain wants it, and the illustrations work better here in black and white. Each also has different levels of Charm and Ferocity, these being used when facing whirlpools and skirmishing with rival RumRunners, whilst a Pistol-Cutlass-Parrot symbol indicates their weapon of choice in duel with a rival pirate. Some also have a tattoo marked on their cards, indicating a special skill useful in dealing with Whirlpool cards. The Whirlpool cards typically grant a ‘Lucky Rascal!’ one-time bonus or some form of ‘Peril & Strife’ which must be overcome. For example, ‘Tame the TideMaid’ is a ‘Lucky Rascal!’ card which allows a Captain to adjust the TideMaid on the tide rounded in his favour, whilst the ‘Torrential Excrement’ explains how a rogue flock of seagulls has unloaded in a Captain’s RumRunner and loaded it down with guano! The problem can be overcome by either sufficient Charm or Ferocity or the tattoo needed to avoid the problem all together. In this instance, a total of eight Ferocity or the Animal Magick tattoo. If a Captain cannot overcome the problem, then his RumRunner must lose some Rum—in this case, two barrels of it. One issue with the Whirlpool cards is that they are text heavy, but there is both flavour and humour on each one.

Lastly there are cards for each Captain’s galleon and RumRunner. Cards under the galleon card are not in play, and therefore safe, but those under the RumRunner card are in play and are not safe—they can be lost in skirmishes and duels, dumped overboard because a Captain failed to overcome a ‘Peril & Strife!’ Whirlpool card, or snapped up by Morgawr! Each Captain has his own RumRunner piece, and there are also pieces for both Morgawr and the TideMaid, a Windicator used to show the direction of the wind, and the Skull & Crosswinds Coin flipped to determine the change in direction of the wind.

Set-up is fairly simple. Everything—both cards and playing pieces are placed on their correct positions one the map, and each Captain receives twelve Cargo cards, three Florin cards, and three Crew cards. All of these go under his galleon card. A Captain selects nine cards from these cards and loads them into his RumRunner. These can be of any combination, but the rules suggest a starting hand during a Captain’s first game. A Captain’s hand cannot be more than nine cards in total and a Captain will find himself balancing the three types of cards in hand throughout the game. He needs to carry rum to the shore, pirate crew to protect his RumRunner—and even attack a rival Captain, florins with which to hire crew, and of course, space to carry those florins back to the safety of his galleon.

On a turn, a Captain does two actions, but has scope to do a lot more. First he moves the TideMaid round the Tide roundel to determine the level of the tide, and then he flips the Skull & Crosswinds Coin to see which direction the wind blows that turn. He can then Set Sail, making up to nine moves. He can move two squares per move if this is a ‘Run’ in the direction of the wind, one square if a ‘Yaw’ and any direction not influenced by the wind, but cannot move in the direction opposite to the wind. If he moves adjacent to Morgawr, she will steal a card from the Captain, and if across a whirlpool, then he draws a Whirlpool card. A ‘Peril & Strife’ Whirlpool card must be dealt with at the end of his turn. A Captain can even sacrifice a crew member to Morgawr to move her anywhere on the map, or a florin card to her to gain extra moves.

Other actions depend upon where a RumRummer is. If at a Port, a Captain can sell Rum, buy crew, and change florins—the latter useful to make space for other cards. If at Morgawr’s Cave, a Captain can peek at the riches she has in her hoard and then steal some—even some a Captain might have sacrificed earlier in the game! If alongside another RumRunner, a Captain can mount a raid. This can be a skirmish in which the raiding Captain attempts to beat the defending Captain using the total of either Charm or Ferocity icons on his crews’ cards, or a duel in which a single crew member from each RumRunner goes head-to-head, comparing their Pistol-Cutlass-Parrot symbols in rock-paper-scissors style—pistol beats cutlass, cutlass beats parrot, and parrots being parrots, parrot beats pistol. A successful skirmish garners the winner two random cards from the loser’s hand, a duel just the one. Lastly, when at his galleon, a Captain can stow florins—they are now safe, swap his crew, and load his RumRunner with rum if he still has some to take ashore.

There is a lot going on in Pirates of Penryn and a Captain has a lot of that he can do. The one thing that he will need to do is balance his hand between the choice of Crew, Florins, and Rum. All will be necessary to win the game, but focus on one to the detriment of the others and a Captain may not be able to make Rum sales quickly enough, be able to deal with raids or whirlpools, or defend against raids. A Captain can also use Morgawr to his advantage—move her to block, threaten, or attack another Captain, or to gain extra movement when it counts! Thematically though, it all feels suitably fitting and fun, emphasising the skill and ability of a Captain to deal with the random fortunes of the changing tide and wind, as well as making the best use of his crew. There is not a high degree of randomness or luck to the game, but there is just enough to make play challenging when it counts.

Physically, Pirates of Penryn is well presented and all of the components are of a reasonable quality—cardboard pieces rather than plastic or wood. If the artwork is perhaps a little twee, the game play will quickly disabuse any Captain that playing Pirates of Penryn is also twee. The rulebook—although it looks a bit too busy, takes the time to explain its rules and give examples of the rules in play. It also includes rules for playing the game with children, a two-Captain variant, and some optional rules to make it more of a challenge. These include the barrels of rum having different values and even being able to buy rum at one port town and sell it at another!