An Other OSR Quartet II 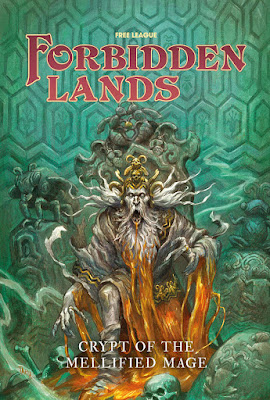 Forbidden Lands: Crypt of the Mellified Mage is an anthology of four adventure sites for use with Forbidden Lands – Raiders & Rogues in a Cursed World, the ‘Retro Open-World Survival Fantasy RPG’ published by Free League Publishing, following from the earlier The Spire of Quetzel. Like The Spire of Quetzel, it provides the Game Master with four more locales she can slot into her Forbidden Lands campaign—whether her own or Raven’s Purge, the roleplaying game’s epic eight-part campaign with an open structure built around eight locations and a finale at a ninth location—or possibly run as one-shots. They reflect the open play style of Forbidden Lands, in which the players and their characters are explorers, travelling across territories which have been cut off for centuries and of which they know little except legends. Such legends serve as hooks, pushing the characters to visit the setting’s adventure sites—villages, castles, and dungeons—and pulling them into the region’s history and secrets, often revealing the dark truths of lands that have been under a blood mist and demon-infested for centuries. Whether delving into the honeyed tomb of an undead apiarist-mage, making a rescue attempt for missing villagers in the caves of a blood-potter, taking advantage of internal politics to defeat the Monkey King and banish his pagoda temple complex which has drilled its way up into the Forbidden Lands, or exploring the weird mind cloud of a long dead wizard, just as with The Spire of Quetzel, what really marks these scenarios as being different is their authors.

All four scenarios in Crypt of the Mellified Mage are written by some of the leading writers in the Old School Renaissance. They include Fiona Maeve Geist, one of the designers of MOTHERSHIP Sci-Fi Horror RPG; David McGrogan, the creator of Yoon-Suin, the Purple Land; Zedeck Siew, author of Lorn Song of the Bachelor and A Thousand, Thousand Island setting; and Adam Kobel, the designer of Dungeon World. The quartet consists of three dungeon and one village adventure sites, and in each case will require a degree of preparation if the Game Master wants to include them in her campaign. Sometimes this is actually creating a location for a dungeon to be found under, but mostly they are foreshadowing during early parts of the campaign to be effective parts of the ongoing story of the adventurers’ explorations.

Crypt of the Mellified Mage opens with Fiona Maeve Geist’s eponymous ‘Crypt of the Mellified Mage’, a dungeon which lies beneath a village which the Game Master will need to create or develop. It is actually the tomb of the sorcerer Pagoag, whose cruel skill and hedonistic experimentation into medical matters is said to have led him down some dark paths including the mellifiying of flesh using honey into a candy which when consumed is said to prolong the consumer’s life. Pagoag, being a sorcerer, also sought life after death and the result of his experiments can be found throughout his tomb—apiaries built from bones, skeletons home to bee swarms, and undead bee swarms! If the legends are true, then perhaps the mollified flesh may be found and collected, perhaps to consume to heal a Player Character’s illness, that of their patron (if they have one), or simply sold to the highest bidder. There is a sense of sickly-sweet revulsion to the tomb and Pagoag himself is a vile monster. The crypt is, of course, not a pyramid, but it has the feel of an Egyptian tomb, although one infused with the musky scents of spices and honey and an apiarist theme running throughout. It is nicely designed, with a pervading sense of creepy unease and multiple entrances and approaches to the tomb itself so that unlike other crypts, there is no linear play to its exploration which funnels the Player Characters and limits their actions. However, one big problem with the scenario is that as attractive as the three-dimensional map is, its design does not always match the text and vice versa. So what this is means that the Game Master will need to put more effort into the scenario to ensure that she understands the layout of the tomb and certainly the connections between rooms.

David McGrogan’s ‘The Firing Pit of Llao-Yutuy’ is a smaller, more focused dungeon, a cavern complex where the eponymous Llao-Yutuy breaks his captured captives and infuses their blood into the bowls, pottery, and even golems he makes and fires. Despite being a much smaller adventure site and less complex than the others, it is no less creepy with its cruel atmosphere and unnerving automata which appear here and there. The potter’s servants and shockingly poorly treated apprentices are unlikely to present much of a threat to the Player Characters, whereas the aforementioned automata, Llao-Yutuy himself, and his vilely shrewish wife will do. There are some intriguing treasures to be found, which might be the reason for the Player Characters’ visit, or they might be employed to rescue some the captives currently held by Llao-Yutuy and his servants. In some ways this is the easiest of the four adventure sites in Crypt of the Mellified Mage for the Game Master to use—it is relatively easy to set up and prepare, and the site is small. However, it suffers from the same cartographic issues as ‘Crypt of the Mellified Mage’, and again will need careful preparation upon the part of the Game Master to ensure that there is no confusion between map and text.

Zedeck Siew’s ‘Temple of the Six-Limbed Lord’ literally invades the Forbidden Lands with monkey magic! Intended for more seasoned players and characters, technically, a village site, it is a temple complex consisting of several pagodas which have drilled their way up into the Forbidden Lands in an attempt to invade heaven. Of course, the Six-Limbed Lord wants to spread his worship, and that includes the Forbidden Lands, visiting nearby towns and occupying them, capturing friendly NPCs, even menacing strongholds held by the Player Characters. The Player Characters might encounter Monkey Soldiers on an impromptu pub-crawl, caravans beset by cloud riders sparking lightning, one of the Priests of the Six-Limbed Lord sat in a gilded throne borne by a Macaque Swarm, or even Nyanyetnya, Seventh Priest of the Six-Limbed Lord, who wants to serve them tea. Of course, she wants more than this, having been expelled from the temple—and she wants back in! To that end, she will engage the Player Characters who if they decide to help her will have to negotiate the petty politics of the other priests and their cohorts. This is the most sophisticated of the adventure sites, and the one to involve the most roleplaying as the Player Characters play the factions in the temple off against each other.

However, ‘Temple of the Six-Limbed Lord’ not only invades the Forbidden Lands literally, it invades the Western fantasy genre of Forbidden Lands – Raiders & Rogues in a Cursed World as well. What this means is that for some Game Masters, this adventure site might be at odds with their campaign and the genre. It is well done, despite suffering from the same cartographic issues as the earlier adventure sites and really adds something memorably different to a campaign, almost leaving Game Master and players alike to wonder quite what a Forbidden Lands-style campaign would be like in the setting beyond the walls of the Temple of the Six-Limbed Lord.

The last scenario in Crypt of the Mellified Mage is Adam Koebel’s ‘The Dream-Cloud of E’lok Thir’, and again is a very different dungeon—even radically different. What it does is turn the mind or dreams of a long dead wizard into a dungeon, one consisting of locations inspired by his fragmented doubts, elations, fears, and joys and as they explore each of these rooms, the Player Characters will encounter reflections of both E’lok Thir’s emotions and their own. There is no map to the dungeon, but rather the Game Master generates the life of the deceased mage and develops descriptions of rooms such as ‘Regret Made Manifest’ and ‘The Hidden Self’ based on what was rolled. The Game Master is free to connect these however she wants and without the need to adhere to the laws of physics, since this is, after all, a ‘Dream-Cloud’. Consequently, there is an otherworldly etherealness to ‘The Dream-Cloud of E’lok Thir’ and because the Game Master will need to know her player’s characters very well, there is an introspectiveness to it as well. Whilst it is the most open of the four scenarios in the anthology, it is also the most challenging to run. Further, it is not the easiest of scenarios to provide motivations for Player Character involvement. The Dream-Cloud can be reached via ritual, even as a consequence of a failed ritual, so the Player Characters might be forced to explore it following a magical mishap. The likelihood is that they will be wanting to enter the Dream-Cloud for a reason, either to obtain an object or treasure, or even information, and each of the location descriptions includes details of what treasures might be found there. Overall, ‘The Dream-Cloud of E’lok Thir’ is more a tool kit than a finalised adventure site ready to play, but its format does mean that it could be played through more than once, and each time it would be different enough.

Physically, Forbidden Lands: Crypt of the Mellified Mage is a lovely little book, that unfortunately let down by the disconnect between text and maps. Work around that though, and it is a pleasing hardback, nicely illustrated with maps done in the same style as other Forbidden Lands books. Each scenario follows the same format as those other books—Background, Legend, Getting Here, Locations, Monsters and NPCs, and Events. Despite the fact that the maps could have been better described, they are lovely to look at and the artwork throughout the book is exquisite. It would have been nice if some of the NPCs in the book had been illustrated, especially the various monkey priests in ‘Temple of the Six-Limbed Lord’ where they play such a pivotal role.

The disappointing side to the four adventure sites in Forbidden Lands: Crypt of the Mellified Mage is that each requires more preparation than they really should, especially to work them into a campaign, let alone coming to understand the map locations and their descriptions, and so none of the four are quite ready to play as they could be. If she is happy to make those preparations and develop them in readiness for inclusion in her campaign, Forbidden Lands: Crypt of the Mellified Mage provides the Game Master with some delightfully different adventure sites, each in their own way, creepy, weird, and wonderful.