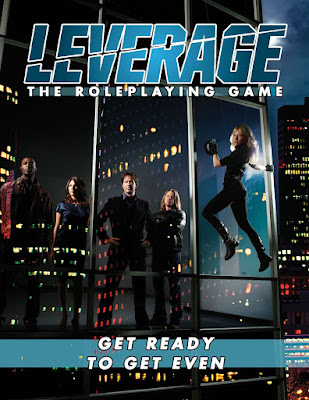 For example, the Crew managed to plant a bugging device in the Mark’s office. However, the Mark’s security ensured it was not able to broadcast what it downloaded from his computer, so the Crew needs to get it back. Winston Moran has already been into the Mark’s office, ostensibly to talk about a bank fraud, but that was to give the bug time to work. Now he needs to get it back. He tells the security guard that he dropped his wallet in the office, so the guard lets him go and get it. The guard is diligent and comes to check on Winston. To see if Winston grabs the bug before the guard becomes suspicious, the Fixer asks his player to roll Winston’s Alertness plus Thief. Unfortunately, this is a d8 for Alertness and a d4 for Thief—the latter is so low because Winston is not as young as he was.
Winston’s player rolls an eight and a one! This sets the stakes at eight because the one is set apart and further, it generates a Complication. The Security Guard has Security Guard d6 and Really Doesn’t Want Any Trouble d6, but since Winston rolled a one and generated a Complication, it adds another die to the Fixer’s roll, in this case, Suspicions Aroused d6. She rolls a four, a five, and a two! This Raises the Stakes to eleven. Winston’s player states that he is going to roll d8 for Alertness and a d4 for Thief again, but spend a Plot Point to bring in a Distinction, in this case, Walks with a Cane. As this is being used to Winston’s benefit, it adds a d8 rather than a d4. His player rolls a three, a four, and a six to give a final result of thirteen. This beats the Fixer’s stakes and she backs down as Winston allays the security guard’s suspicions with, “Found it! Sorry for being so slow—old man with a cane, you know?”

Beyond the simple mechanics, Leverage: The Roleplaying Game introduces numerous elements which model the television series. For example, all of the Crewmembers are Experts and as in classic episodic television, they do not really improve, or at least if they do, it is at a very slow rate. Instead of the classic Experience Points, a Crewmember records each of the Jobs he completes. During a future Job, a player can have his Crewmember make a ‘Callback’ to the previous events of another Job to gain a bonus eight-sided die. This provides the Crewmember with a ready pool of bonus dice, but alternatively, a player can improve an Attribute or Role die, or purchase further Specialities or Talents by permanently marking off the Job titles.
Where the television series is really modelled is in the use of Flashbacks. In an episode of the television series, the focus of the Job is all on the Mark and how he is affected by the Crew’s efforts to scam him. They come in two forms. Establishment Flashbacks add an element to a Crewmember’s backstory to bring an Asset into play, whilst Wrap-Up Flashbacks establish Assets which can aid in turning the tables on the mark and go towards the finale and Mastermind’s final roll against him. They are both a narrative device to further showcase the various Crewmembers’ Roles and other traits and a means to overcome a Job’s final hurdles.
For the Fixer, there is a deep discussion of the heist genre as seen in Leverage, taking her through the process of constructing a Job—from the Client and his Problem to the Mark, a discussion of a traditional three-act structure versus the five-act structure of a Leverage episode, twists to use and twists to avoid—the latter primarily to prevent the players and their Crewmembers getting to bogged down in planning, taking inspiration from news stories, and even a ‘Situation Generator’ for creating a random Job. The Fixer can also make use of the example Clients, Foils, Agents, Locations, and more, though Locations are relatively easy to come up with given that the Leverage: The Roleplaying Game is set in the modern day and the Fixer can draw inspiration from around her. The world around the Crew is explored in broad detail, whilst the criminal and the Crew’s place in it is given more detail. With advice on subjects such as ‘Thinking Like a Criminal’, ‘Violence’, and the nature of ‘Cons’, including long, short, and classic cons. This last part is a solid introduction to grifting and running con games, and much like the rest of the chapters intended for the Fixer can just as easily be read and perused by the players. Rounding out the Leverage: The Roleplaying Game is an episode guide for the first two seasons of the television series. This either works as inspiration for the Fixer or it feels a lot much like filler content, but either way, it would have been nice to have some ready-to play-Jobs alongside it.
One issue with Leverage: The Roleplaying Game is the same as the Leverage television series. It is fundamentally episodic in nature, such that there is relatively minimal character or on-going development from one episode to the next. This is partially reflected in the slow growth and improvement of the Crewmembers through the Jobs recorded and spent as Experience Points. What this means is that the Leverage: The Roleplaying Game is not necessarily a game to play on an ongoing or even a long term basis, but since every episode of the television series and every Job is more or less self-contained, it works well for one-shots, for short seasons, and even pickup games with minimal preparation time if the Fixer uses the tables provided in the book to create a situation.
In terms of play, Leverage: The Roleplaying Game is a game which encourages player input, whether that is in the expenditure of Plot Points to add Assets to a Job or be inventive in how each player brings his Attribute and Role combinations into play. The Fixer will probably suggest combinations most of the time, but there is scope for a player to suggest his own too. This though, is also open to abuse, but a good Fixer should be able to nix that in the bud and encourage her players to play in the spirit of the Leverage television series.
Physically, Leverage: The Roleplaying Game is a really clean, bright looking book decently illustrated with stills from the television series. It is both engagingly and well written, and although it lacks an index, the table of content does a reasonable job of making up for it.
Neither the mechanics nor the genre of Leverage: The Roleplaying Game have dated and both are as comfortable to run in the here and now of this year or any other year, as much as they were in 2010. The focus of the design on emulating its source genre however does date it to its publication era, that of the storytelling game/indie roleplaying game movement which dominated the late 2010s, but of course, designed to a far more commercial end. As much as it is designed to emulate the Leverage television series, its treatment of its genre means that it can do other heist or con game set-ups just as easily as it can Leverage the television series. Nominated for the 2011 Origins Award for Best Roleplaying Game, Leverage: The Roleplaying Game is an elegant, well-designed treatment of not just the Leverage television series it is based upon, but also of the heist and the con game genres in general.
Posted by pookie at 12:00