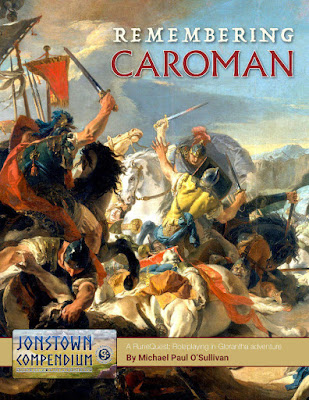 What is it?
Remembering Caroman presents a scenario for use with RuneQuest: Roleplaying in Glorantha.

It is forty-nine page, full colour, 25.75 MB PDF.
The layout is clean and tidy, and many of the illustrations good. It needs an edit.

Who do you play?
Player Characters should be Sartarites or their in good standing. Members of the Orlmarth or Ernaldori clans will have strong ties to the plot and several of its locations. A shaman, or any character capable of talking to the spirits of the dead will be very useful. A Humakti will also be of use.
What do you need?
Remembering Caroman requires RuneQuest: Roleplaying in Glorantha. The RuneQuest: Glorantha Bestiary may be useful for details of spirits, and both the RuneQuest Gamemaster Screen Pack and The Smoking Ruin & Other Stories will be useful for information about Clearwine. The Pegasus Plateau & Other Stories may also be useful for information about the Locaem tribe.
What do you get?
Remembering Caroman is a scenario set in and around the lands of the Colymar tribe after the events of the Dragonrise and the Lunars have been thrown out of Sartar. The Player Characters attend the funeral of a local homesteader and discover that not are only the ancestor spirits in attendance, they are also unhappy, primarily a holdover from the disruption caused by the occupation of much of Sartar by the Lunar Empire. Discussion with the other funeral attendees reveals that there may be spirits still to be laid to rest at nearby farm on Little Starfire Ridge.
Further investigation reveals that the farm has fallen into neglect following the death of its owner, that it is haunted by her spirit—she cannot rest or cross over until she sees her son who has been missing for almost a quarter of a century, and that it is a potential source of friction between the nearby clans as to which of them will inherit once the issue at hand is settled. Essentially, what the Player Characters have to do is locate her son and return him home. This requires no little investigation, the Player Characters needing to travel to first Clearwine, then to the shores of Kjartan’s Lake, and from there by one or two different routes into Sambari tribal lands. Their primary sources will be survivors of the first few battles during the Lunar invasion of 1602.
Remembering Caroman involves plenty of travel and besides one or two given encounters and situations, has scope for the Game Master to add details and events of her own. The initial setting on the Little Starfire Ridge makes the scenario easy to tie into a campaign in and around Apple Lane, such as that established in the RuneQuest Gamemaster Screen Pack, and then via both the RuneQuest Gamemaster Screen Pack and The Smoking Ruin & Other Stories to Clearwine. With some effort, the locations for the scenario could easily be adjusted to elsewhere. Along the way, there are some great scenes, such as coming to the help of workers at a collapsing salmon leap and running into a band of Trollkin who have got the wrong idea.
The scenario will more challenging for a group whose number does not include a Shaman. The scenario is also quite linear, but then the Player Characters are following a trail of clues. This trail does diverge though, providing two routes to its dénouement, but that said, if the Player Characters take one route, they will avoid the interesting encounters on the other. Which is a pity, because the the likelihood is that the Player Characters will learn more from one path than the other. The scenario’s initial set-up may a require a bit of push to get the Player Characters involved, so the Game Master should ideally dig into their backgrounds to tie them into the set-up and thus get them involved.
Is it worth your time?
Yes—Remembering Caroman presents an enjoyable exploration of how the magical and the mundane worlds of Glorantha come together in a scenario that can easily be slotted into an ongoing campaign set in Sartar.
No—Remembering Caroman is probably best avoided if the campaign is not set in Sartar and the Player Characters do not include a Shaman.
Maybe—Remembering Caroman is strongly location specific, but has some entertaining scenes which could be adapted elsewhere.
Posted by pookie at 18:00