Sounds of the Barrier Peaks 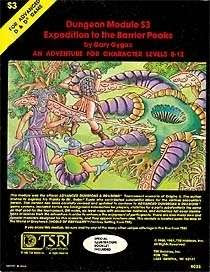 Published in 1980, S3 Expedition to the Barrier Peaks has long been regarded as a classic adventure for Advanced Dungeons & Dragons, First Edition, even so far as being ranked at number five in Dungeon magazine’s ‘The 30 Greatest D&D Adventures of All Time’, published to mark the thirtieth anniversary of the publication of Dungeons & Dragons. Set in the World of Greyhawk, it did something that no other module did at that time, and that was to crash—quite literally—the Science Fiction genre into the Fantasy genre, when the Player Characters, hired by the Grand Duke of Geoff to investigate the origins of creatures spewing forth from a cave in the Barrier Peaks and attacking the surrounding regions, discover nothing no less and no more weird than a crashed space ship. Of course, the Player Characters are quite unlikely to view it as that, but their players will certainly realise it as their characters encounter strange creatures and artefacts that are beyond magic. Over the years, this memorable adventure has been reprinted more than once, first by TSR, Inc. in S1-4: Realm of Horrors in 1987 and then in S1-4: Dungeons of Dread in 2013 by Wizards of the Coast. More recently, in 2019, it has been reprinted and updated for Dungeons & Dragons, Fifth Edition by Goodman Games with Original Adventures Reincarnated #3: Expedition to the Barrier Peaks, part of the ‘Original Adventures Reprinted’ series which began with Original Adventures Reincarnated #1: Into the Borderlands. 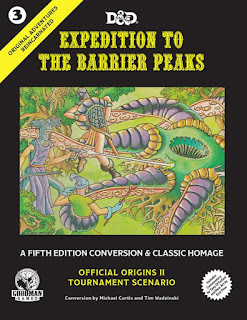 Now, S3 Expedition to the Barrier Peaks has its own rock album. When it comes to roleplaying music has long been seen as something to add to the experience, to build the atmosphere, but rarely, the other way, the single by Sabbat, Blood For The Blood God, inspired by Warhammer Fantasy Roleplay, which appeared in White Dwarf #95, the Traveller concept album by the band, The Lord Weird Slough Feg, and the work of the band, Gygax, being clearly inspired by Dungeons & Dragons, all being the odd exceptions. Doubtless, there are others. The Barrier Peaks Songbook is a ten-track concept album from Loot the Body. It describes itself as a psychedelic rock album, though it feels more Prog Rock than psychedelic rock, but to be fair, just as The Barrier Peaks Songbook is an exception in being a rock album inspired by roleplaying, Reviews from R’lyeh reviewing a rock album—or indeed, any music, is also an exception. 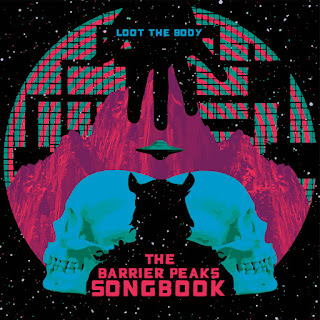 The album opens with ‘Expedition to the Barrier Peaks’, a crash of drums and guitar rhythms, and a sense of hope and inspiration as fifteen elves, halflings, dwarves, and men, “…brimming with the confidence that we’d soon be home again” cry of their quest, before plunging beyond the strange door in the mountain and cave and confronting the genuinely fantastical and for the Player Characters, utterly weird. The second track, ‘The Labyrinth of Evermore’ promises “Sights and sounds I’ve never known before”, something that in combination, module S3 Expedition to the Barrier Peaks and album The Barrier Peaks Songbook, undoubtedly do. None more so with encounters with the weird Vegepygmies, a variation upon the Mushroom Men so beloved of the Old School Renaissance, the song writer neatly playing with their concept with the lines, “And we’re legion, Because we’re made from, The same mold” in ‘We’re the Vegepygmies’, and the infamously benign ‘Wolf-In-Sheep’s-Clothing’ encounter or ‘The Cute Little Bunnyoid on the Stump’ that turns into a nasty surprise for the Player Characters. Its accompanying track, ‘Bunny on a Stump’, highlights this almost idyllic addition to the encounters in the crash-landed spaceship, one very much at odds with the dangerous nature of exploring the metal dungeon. This culminates in the harder-edged and batrachian-themed ‘Froghemoth’, which ties into one of the most dangerous encounters in S3 Expedition to the Barrier Peaks. This adds a pleasing hint of cosmic horror and drowning despair to the encounter that was probably never envisioned by E. Gary Gygax when he wrote S3 Expedition to the Barrier Peaks, but which forty years on, Loot the Body reinterprets and emphasises from an adventurer’s perspective.

Of course, S3 Expedition to the Barrier Peaks is renowned for its clash of Fantasy and Science Fiction, and if there is an issue with The Barrier Peaks Songbook, it is that it could have emphasised the  contrast between fantasy and technology further. There is a sense of Future Shock, of being faced with too much change, far too soon or far too quickly, in tracks such as ‘The Doctor’, but there no sense of the adventurers in this songbook picking up items of technology, experimenting with them, suffering mishaps, and so on until they work out how to operate them and what they do. Perhaps this is taking the confluence between module and album too literally, but it is, and always was, a significant aspect of S3 Expedition to the Barrier Peaks. Perhaps the most direct confrontation between the two is in ‘Robot Police’, a more direct indication for the adventurers that they are interlopers in the spaceship. The song has contemporary resonances, the direct manner and horridly brutal methods of these law enforcement androids applying to the events of 2020 as much as it does a spaceship from another dimension in a roleplaying scenario from the past. The Barrier Peaks Songbook ends on a psychedelic, even psychic note, as the adventurers have one last weird encounter, although this one is of a benign, rather than malign nature, in ‘Shedu Liberation’.