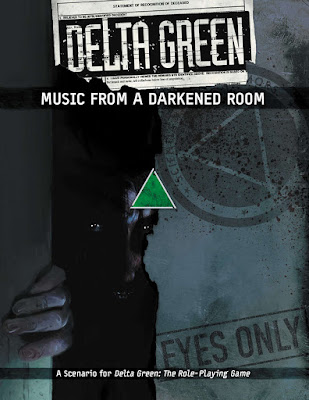 The careers of Delta Green agents tend not to go well—they dabble in the secrets of the Unnatural or they become so obsessed with a mystery or a case that they lose perspective, threaten their very sanity, and even the secrecy of the conspiracy itself. This is certainly the case in scenarios such as Delta Green: Need to Know and Delta Green: Kali Ghati, so it is with Delta Green: Music From a Darkened Room. Also available in the anthology, A Night at the Opera: Six Terrifying Operations for Delta Green: The Role-Playing, this is essentially a haunted house scenario, but done in the style of Delta Green rather than another horror roleplaying game, such as Call of Cthulhu, Seventh Edition.

Delta Green: Music From a Darkened Room, published by Arc Dream Publishing, takes place in the small town of Meadowbrook, New Jersey. The Agents are directed to investigate and determine the cause of the death of FBI Special Agent Arthur Donnelly who was found dead at 1206 Spooner Avenue, his throat and his blood sprayed around the room where he was found dead. Although his death has been ruled as a suicide, Delta Green suspects that there is more to it because the previous owner was also found dead under the exact same circumstances. Although the FBI considers the matter closed, Delta Green does not, and that will both drive and possibly hamper the Agent’s investigative efforts. The Agents are tasked with determining whether or not the house is tied to the deaths—and if so, how, and then if the house remains a threat to the public at large.

Effectively, what this means is that Delta Green: Music From a Darkened Room is divided into two halves—much like its precedent, ‘The Haunting’ for Call of Cthulhu. In the first half, the Agents investigate the history of the house, its occupants, the reasons for their selling up, and in all too many cases, the terrible things which happened whilst they were in 1206 Spooner Avenue. The Agents will have to work hard to dig into the history of the house, and even harder to avoid arousing the suspicions of the proper authorities, but there is a richness of clues for the Agents to uncover. Beginning with a couple of local contacts as well as a local Green Box—a repository of equipment, clues, records, and leftovers from previous other investigations, the trail of clues leads through the records of the ownership of the house, death certificates, surviving past occupants, and more. As well as warning the Agents not to alert the authorities, Delta Green also notably warns the Agents that they should take extreme care in investigating the house, suggesting that it may have had an influence upon the deaths which took place within its walls. Hopefully, this will be strong enough of a warning for the Agents to do their due diligence, rather than rushing off to physically examine the house (though there is nothing to stop them from doing so if they wish).

In the second half of the scenario, hopefully forewarned by discoveries made during their investigations in and around Meadowbrook, the Agents enter the house and explore its confines. The descriptions of individual rooms and what is in them feel quite lightly drawn—the Handler may well want to add a little more detail here, whereas the descriptions of what might happen in each of the house’s rooms and when, is highly detailed by comparison. The encounters and experiences to be had  from room to room in the house play are a major factor in the scenario’s second half, many involving flashbacks and pleasing in places, all five senses, and the investigation of the actual house, the majority of them varying according to the Agents’ Will Power stat. This enables the Handler to tailor the encounters and experiences to the players’ Agents, enabling her to start with a sense of unease during the first few scenes in the house and then build up through creepy to weird and then outright bloody confrontations. Although this needs to be handled with some care lest it be overplayed, there are some entertaining shocks to throw at the Agents and their players. The Handler may want to pick and choose which of these to use lest the horror becomes too sudden, too often.

Although there one or two nods in Delta Green: Music From a Darkened Room to its forebear, ‘The Haunting’ for Call of Cthulhu, most notably the two act structure of the investigation and the inclusion of a family from Quebec, Delta Green: Music From a Darkened Room is very different. Not just its modern milieu, but also because it is creepier, the whole house seemingly haunted and potentially a source of scares and threats to the Agents. The secrets of the house and its past occupants are also not as obviously found, and the Agents will have to work increasingly hard to discover a great many, if not all, of the scenario’s clues. If the scenario’s investigative process is also challenging—more so if the Agents are trying to conceal their interest in the house, let alone their investigations, then determining and potentially applying a possible solution that will solve the mystery is extremely difficult. In fact, so difficult that some players may even come to see Delta Green: Music From a Darkened Room as a no-win scenario.

Physically, Delta Green: Music From a Darkened Room is a well-presented scenario. It is well written, but the Handler will need to read it carefully as there is a lot of information that she will potentially have to impart to her players and their Agents. The single set of floorplans is clear, but perhaps a little plain and could have done with a few internal details added to help the Handler describe each room. The few handouts could also have been collected at the end of the book for easy use by the Handler. Given the wealth of clues to be found in the scenario, the players should be prepared to take a lot of notes for their Agents.

Delta Green: Music From a Darkened Room is a dark foreboding scenario, one with a strong sense of claustrophobia, both within of the walls of 1206 Spooner Avenue and in the town itself—especially if the Agents’ activities come to the notice of the townsfolk of Meadowbrook and they begin to gossip and take an interest in them. The Agents’ investigative efforts also have potentially disastrous consequences if they are not careful. Overall, Delta Green: Music From a Darkened Room is an enjoyable mix of challenging, but rich investigation and spine-chillingly unpleasant, often macabre atmosphere and encounters in a haunted house.