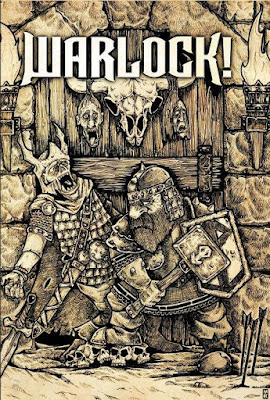 At first sight, Warlock! looks like just another Old School Renaissance Retroclone—and it is, but not the sort you might be thinking of. Published by Fire Ruby Designs—previously best known for Golgotha, the Science Fiction retroclone of far future dungeon scavenging in shattered battleships—Warlock! quickly makes its inspirations known with the strap line, “A Game Inspired By The Early Days Of British Tabletop Gaming”. As much as Warlock! is a fantasy roleplaying game replete with Dwarves, Elves, and Halflings, warriors and wizards, and so on, it only draws upon Dungeons & Dragons as far as that, and no more—just as inspirations for Warlock! did. Instead, Warlock! has Careers—Careers such as Agitator, Boatman, Grave Robber, and Rat Catcher; it has two attributes, one of which is Luck; and it has a Warlock! running around an unnamed, humancentric kingdom causing mayhem. The inspiration for Warlock! is thus Warhammer Fantasy Roleplay and Maelstrom as well as the Fighting Fantasy solo adventure books which began with The Warlock of Firetop Mountain. However, Warlock! is very much lighter than Warhammer Fantasy Roleplay, at least mechanically, though mechanically more complex than Fighting Fantasy. In tone though, Warlock! is intended to be grim and gritty, a world of adventure and peril, but with mud aplenty—or worse—underfoot and a certain, sardonic sense of humour.

Warlock! is a Career and Skills driven game rather than  a Class and Level game. A Player Character has two attributes—Stamina and Luck, as well as a Community. This can either be Human, Halfling, Elf, or Dwarf. These grant societal benefits rather than mechanical ones. He also has thirty-two base skills, ranging from Appraise, Athletics, and Bargain to Survival, Swimming, and Throw, and all of which range in value from one to twenty. To create a character, a player rolls dice for the two attributes, selects a Community, and sets ten skills at a base level of six and another ten at level five. The rest are set at a base level of four. The player then rolls four six-sided dice. These generate the four choices he will have in terms of Basic Career for his character. Once selected, a Career provides four things. First a quintet of skills which can be increased during play whilst the Player Character remains in that Career and a maximum level to which they can be improved, either ten or twelve. For example, the Pedlar receives Ostler 10, Streetwise 10, Appraise 12, Bargain 12, and Repair 12. The player divides ten points between these skills up to their maximum given values. Second, it provides a sixth skill, named after the Career itself, the level for this Career skill being the average of the other skills the Career grants. Third, it provides some standard equipment, and fourth it gives a pair of background elements specific to the Player Character’s time in that Career, both of which are generated randomly. For example, a Pedlar’s two die rolls would determine what he sold and where he has been. Lastly, a player picks three personality traits for character.

POSSESSIONS
6 silver coins, backpack, three days’ foods, waterskin, eating knife, jaunty clothes, and boots.
A bottle or two of something strong and a few ‘relics’ of your past exploits, impressive but worthless.

NOTES
What tales do you tell? – The latest tales from the capital.
Where have you been? – Here and there. Buy me a drink?

Mechanically, Warlock! is simple. To undertake an action, a player rolls a twenty-sided die, adds the value for appropriate skill or Career and aims to roll twenty or higher. More difficult tasks may levy a penalty of two or four upon the roll. Opposed rolls are a matter of rolling higher to beat an opponent. Luck is also treated as a skill for purposes of rolling, and rolled when a character finds himself in a dire or perilous situation where the circumstances go in his favour or against him. Combat is equally simple, consisting of opposed attack rolls—melee attacks versus melee attacks and ranged attacked versus the target’s Dodge skill. Damage is rolled on one or two six-sided dice depending upon the weapon, whilst mighty strikes, which inflict double damage, are possible if an attacker rolls three times higher than the defender. Armour reduces damage taken by a random amount.

Damage is deducted from a defendant’s Stamina. When this is reduced to zero, the defendant suffers a critical hit, necessitating a roll on a Critical Hit table. Warlock! has five, for slashing, piercing, crushing, and blast damage. Of course, roleplaying games like Warhammer Fantasy Roleplay had more, and more entries on them, but for a stripped back game like Warlock!, they are enough—and they are brutal. Damage below a defendant’s Stamina acts as a modifier to the roll on the table, so once dice are rolled on the critical damage tables, combat takes a nasty turn.

For example, Gottschalk Einstein is heading to his lodgings after a night on the town when he is attacked by a couple of thugs—Wilmar and Bruna, thinking that the worse for wear gentleman will be an easy mark. Both have clubs, 14 Stamina, and a Blunt skill of 3. The Game Master states that in his inebriated state, Gottschalk will be surprised. This means that the thugs can act first and have a +5 bonus to their rolls. Gottschalk’s player will roll normally, but will be using his Dodge skill of 9. Against Wilmar’s roll of 10, Gottschalk’s player’s roll 13 is good enough—the raconteur sees the attack coming and just steps out of the way. Bruna is more successful though, as the Game Master rolls a total of twenty against Gottschalk’s 15. The Game Master rolls 1d6-1 for her club and inflicts four points of Stamina damage, which Gottschalk suffers because he is not wearing armour—a poor way to impress the ladies! On the next round, the Game Master has everyone roll for initiative, a simple roll of a six-sided die. Gottschalk’s four beats the thug’s two, and drawing his arming sword, he swings at the nearest thug, which is Bruna. Unfortunately, Gottschalk is slightly drunk and the Game Master levies a -2 penalty to his Large Blade skill—reducing it to two (who said Gottschalk was a fighter?). His player rolls a total of 12 versus Bruna’s 8, and so hits. Gottschalk slashes at his assailant and inflicts nine damage on her, reduced by one for her padded jerkin. Bruna now has six Stamina. Wilmar attempts a second attack, and whilst Gottschalk is at a penalty on his Dodge roll, his player rolls 16, three times Wilmar’s roll of 1 which means not only that he misses, the Game Master rules that he falls flat on his face!

On round two, Gottschalk continues slashing at Bruna, his player rolling a total of 21. The Game Master rolls 18, which is not good enough and his drunken swings are enough to inflict another eight points his blade slashes open her padded jerkin. This reduces Bruna’s Stamina to -2, necessitating a roll on the Slashing Critical table. Gottschalk rolls two six-sided dice and adds two to the result for an average result of seven—which means that he has sliced at least one of her fingers off! She drops her club and clutches her hand in pain. She thinks better of her action and dashes for the alley. Meanwhile, her cohort, Wilmar manages to get to his feet and hefting his club suddenly realises he is facing a drunk with a bloodied sword in hand and his cohort has scarpered! Wilmar has a moment to think about his current Career choice…

Magic in Warlock! can be cast by either priests or wizards, but both use Incantation skill to cast, have to be cast from scrolls, and require the expenditure of Stamina to power. Spells can thus be cast so long as the caster has Stamina. However, a caster will suffer ‘Wrath of the Otherworld’ should his player roll a one, followed by a second failed Incantation test. This results on a roll on the Miscast table, leading to results such as the caster’s skin being bleached white or their face frozen in a grimace for several days. It is even possible for non-priests or non-wizards to cast spells, that is, read them off the scrolls. However, the likelihood of such spells being successfully cast is relatively low given that every Player Character will have a four in his Incantation skill… Some thirty-six or so spells are listed, from Alarm and Banish to Swarm and Unseen. Magic items in Warlock! essentially model the effects of spells, either without the need for an Incantation check, or with the Incantation check, but without the Stamina cost.

Warlock!’s bestiary includes all of the usual suspects, from Chimera, Dire Wolves, and Demon to Wight, Wraith, and Wyvern. Advice for the Game Master highlights the deadliness of the combat, the low power of the magic and its potential accessibility by everyone, and whilst the monsters are not necessarily evil, they may act as such. It also states that the way to become powerful in terms of magic is to specialise, but there are no rules for that. The major piece of advice for the Game Master is that Warlock! is designed to be hackable, and given how light the mechanics are, that is certainly the case. There is advice too, on handling the expectations that the players have in coming to a scenario and building an adventure around those. However, there is no scenario included which would showcase what the designer expects to see, and this is not helped by the lack of background to Warlock!. What there is, is very lightly sketched out. There is a marauding Warlock! of course, and the gods, such as the beloved Thrice Blessed, the bloody Red King, and the reviled Dragon, but nothing beyond that...

Warlock! is a buff little book, starkly laid out and illustrated in a suitably rough style which feels suitably in keeping with the period inspiration. It is very handy and especially combined with the lightness of its mechanics, makes it easy to reference and to run from the book.

The danger of being inspired by Warhammer Fantasy Roleplay and Fighting Fantasy is that Warlock! could have been fairly complex, but in taking concepts and structures from both—the Careers in particular of Warhammer Fantasy Roleplay and the simplicity of Fighting Fantasy, the result is something that is leaner, faster, but still as brutal and as grim. Plus it is light enough for the Game Master to easily develop her own content. Overall, Warlock! is easy to pick up and play, presenting a quick and dirty fantasy roleplaying game that will tick many a gamer’s sense of nostalgia.