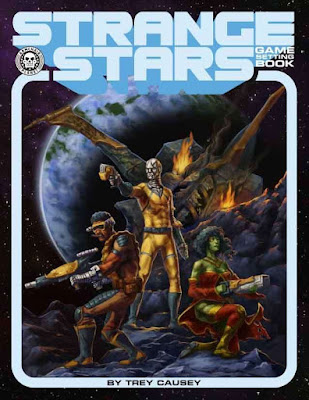 Strange Stars: Game Setting Book is a systemless Science Fiction setting book published by the Hydra Cooperative, a publisher best known for its point-crawl fantasy scenarios such as Slumbering Ursine Dunes and What Ho, Frog Demons! – Further Adventures in Greater Marlinko Canton. It is very much written to appeal to the Old School Renaissance, being inspired by the televisual Science Fiction of the seventies and eighties, the works of authors such as E.C. Tubb and Jack Vance, and TSR, Inc.’s first Science Fiction roleplaying game, Star Frontiers, in particular. So, it is generally fairly light in its treatment of the genre. However, it includes more modern elements of the genre, most notably Transhumanism, including authors such as Peter Hamilton and Alistair Reynolds. Being systemless, it would work with Stars Without Number—and there is a rules companion for the Strange Stars setting using Stars Without Number, Savage Worlds, or Fate Core, but this is not as such a complete setting. Instead it details—although not in too much detail—elements of the far future setting, such as peoples, places, and technologies. There is no grand overview and as such is designed as a compendium of ideas and elements that evoke the period feel of its genre. So, there is no grand overview by design, leaving the Game Master and her with the space to fill in the details as necessary. Which means that it is not going to appeal to some gamers, whereas it will others.

It quickly dives into a very short history of the future of humanity. The Radiant Polity has arisen to claim stewardship of paleo-humanity and hyperspace travel following a Dark Age into which the mysterious Zurr crept across planet after planet, and the research-sadists known as Faceless Ones appeared, each of whom would replace their face with a powerful sensory apparatus. The Dark Age is said to have lasted a millennium or more, and to have come about after The Great Collapse of the Archaic Oikumene, a technologically advanced empire which conducted planetary-scale engineering, built floating, crystalline cities, and constructed the hyperspace network. The Archaic Oikumene may or may not have arisen in the cradle of humanity, but true knowledge of the Archaic Oikumene and Old Earth have been lost.

It also introduces three categories of ‘sophonts’—Biologics, Moravecs, and Infosophonts. Biologics, from Paleo-Humanity to Star Folk bioships, include the descendants of organisms—either from Old Earth originally or another world, designed organisms, and bioroids, or biologic androids. Moravecs, named for an Old Earth scientist-prophet, like the warrior-poets of Eridanus or Telosian Moravec-supremacists are self-replicating, sapient robots, whilst the Wanderers, the Wise Minds of Interzone, and the like, are Infosophonts, digital minds independent of physical form.

Interstellar travel is achieved via hyperspace gates which connect star systems—and these routes and their various travel times/speeds are marked on the polity maps throughout the book. No routes are given between these polities, so the Game Master can connect them in any fashion that she wants. What is interesting is that none of the states newly arisen in the wake The Dark Age have knowledge of how to construct starships—certainly not their star drives, which need to be salvaged from ships of the past.

Six of the polities are given tw0-page spreads each—The Outer Rim, The Alliance, The Instrumentality, the Coreward Reach, The Vokun Empire, and The Zuran Expanse. Each is given a brief description, details of a native inhabitant, and more detailed writeups of its planets or major sophonts. So the Outer Rim, located on the frontiers of space, is dominated by an isolated trio of worlds—Boreas, an ice-covered ocean moon whose native, intelligent coral life have weaponised microbiota that can reanimate the dead to fight back against an invading sophonts, the blue-skinned humanoids known as Uldra; the Fortuna system is a gambler’s paradise and is home to The Wheel, a roulette wheel-shaped space station and Solitaire, a diamond planet; and Gogmagog, where giant robots inexplicably fight each other, the defeated machines scavenged by bot breaker teams for the advanced technology they can sell off world, before von Neumann scuttle out to make repairs! The individual detailed is Yeran Gar, a Djägga—a vaguely feline humanoid—who makes his living as a bounty hunter.

Of the other polities, The Alliance was formed in response to the lawlessness of The Zuran Expanse and religious strife of Radiant Polity, and consists of seven member sophonts, such as the Gnomee, a small hive-like sophonts who mine asteroids, the winged, angel-like Deva dedicated to repairing the ten moon-sized worlds in their home system, and the Neshekk, banking and investment clans who are intensely private. The Instrumentality of Aom is a theocracy home to the Circus, a ring world which is the largest habitat in known space. The Coreward Reach, currently threatened by the Locusts, space borne alien von Neumann machines which devour habitats, was once a major centre of human civilisation, but now lies on the very frontier, and whose worlds include Gaea, a mystery copy of Old Earth and Rune, a medieval world whose sorcerers use magic (or psionic powers) to fight dragons. The Vokun Empire was once fiercely expansionist, but its increasingly corpulent leaders, once great conquerors have turned inward and become obsessed with petty politics, but are still able to field their feared Kuath shock soldiers, each sheathed in a two-and-a-half meter tall bio-suit and use Voidgliders, vacuum-adapted humanoids to sniff out lost hyperspace nodes. Lastly, The Zuran Expanse is a ramshackle, lawless collection of worlds, thought to be the site of Old Earth and is home to the Library of Atoz-Theln and Deshret, a desert world slipping back into what it once was before being terraformed and is worked over by Sandminers sifting for fragments of code and lost artefacts.

Other organisations or groups are not ignored either, whether that is Nomads like the Kosmoniks, traders and occasional pirates who live aboard rune-inscribed spaceships who communicate via sign-language or translators, or the S’ta Zoku, star folk who travel between worlds where they declare great festivals of music, sensory experiences, and more. Threats include pirates, criminals, and hostile sophonts. The pirates include the Zao Corsairs, who operate out of a rogue asteroid and are notorious for capturing and looting ships, holding their passengers to ransom or selling them into slavery—even selling the bodies of the captured passengers separate to their uploaded minds! The criminals include the Pharesmid Syndicate whose members are all bio-clones or mind copies of its founder, terrorist Ulm Pharesm, along with a list of most wanted, whilst the Ksaa and the Ssraad are sophonts inimical to galactic society at large. The Ssraad claim The Zuran Expanse and come in three colours—the Green who launch raids against other sophonts from their orbital stations and whose extending tongues can deliver a paralysing venom, the vicious Red employed as shock troops by the Green and mercenaries for the Blue, and the Blue, who steal ships and technology, and then force captives to remodel before killing them. Lastly, Strange Stars covers psionics—though only in a basic way, gives a pronunciation guide, and suggests some one-line adventure ideas.

Throughout, there is a wealth of tiny details which add to the Strange Stars setting and suggest adventure ideas. For example, the owner of Solitaire organises races run via remote operation and psionic control for the patrons of The Wheel, leases mining rights on the diamond planet, and is rumoured to harbour a data vault deep underground. Opportunities to gamble, race, and even hunt for and break into the data vault all lend themselves to adventure ideas. Similarly, under the description of starships and travel, that the holy grail of any salvager is one of the ancient battleships the size of a city and possessing a sophont mind. There were twelve of these, but some are known to have been destroyed, the others lost.

Where perhaps the Strange Stars: Game Setting Book is lacking is the corporate elements of the setting—there are no corporations in this future. A few scenario more developed hooks would have been nice too and as much as starship travel figures in the setting, you never get a feel for what the ships themselves look like.

Physically, the Strange Stars: Game Setting Book is stunning. The artwork evokes the sources that it draws from, whether that is Stella Starlight, starship captain of the Motherless Child, who all flairs, platform heels, and high collars, looks like she stepped out of a Blaxploitation Sci-Fi film, or Sianna Elizond, Special Operative for The Instrumentality, whose weapon echoes that of Princess Leia Organa from Star Wars, whilst her look is that of Jessica 6, from the film Logan’s Run. The Ssaad are reminiscent of the Slaad of Dungeons & Dragons, whilst the exceptional back cover artwork manages to give nods to the trading cards, electronic game cartridges, and the ‘Choose Your Own Adventure’ books, all of the late seventies and early eighties. The book itself is well written and engaging, and with everything in full colour, it looks stunning.

At first, it is a little difficult to know quite what to make of Strange Stars: Game Setting Book, in the main because it is a book of parts that connect, but remain separate. So initially, it feels as if there should be a whole setting here, complete with histories and grand maps, but for which, thirty-two pages were not enough. That though, is not the point of it being that book of parts and because it is a book of parts,  Strange Stars: Game Setting Book works on two levels. First, as a whole setting, one in which the Game Master can freely inject content of her because there is so much space—figuratively and narratively—to work in. Second, as a source of ideas and elements that she can plunder or be inspired by to add to her own game, and this is made all the easier because the content is compartmentalised throughout—not just in the writing, but in the layout too. Overall, Strange Stars: Game Setting Book is a Space Opera setting rich with ideas ready for the Game Master to develop or source for a setting of her own design. All it needs is the rules set of the Game Master’s choice.