Friday Fiction: At the Mountains of Madness Volume I 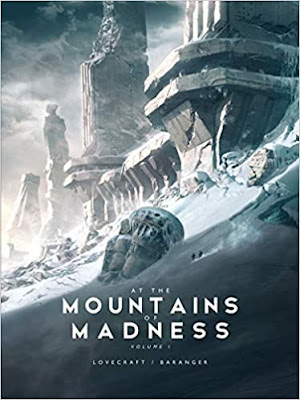 At the Mountains of Madness is horror author H.P. Lovecraft’s longest and one of his most famous stories. It takes the form of a series of letters, written by Doctor William Dyer, a geologist from Miskatonic University, who in late 1930 led an expedition to the Antarctic which would end in disaster, madness, and death following the discovery of the remains of prehistoric lifeforms unknown to science, buried in the permafrost and the remains of a cyclopean city behind a mountain range the height of the Himalayas—previously never seen before, the city long abandoned for terrible reasons which are ultimately revealed at the denouement of the story. Specifically, Doctor Dyer’s letters have been written in an effort to prevent a second, and much more important and widely publicised expedition which is being mounted to the Antarctic from following in the same path. The story has a strong sense of atmosphere and environment—the ice and snow, and extreme low temperatures play a major role in the narrative, serving as a starkly frigid backdrop against which its events take place and its equally stark revelations as to the horrid and horrifying events in the past and their dark influences upon the origins of mankind.

Originally serialised in the February, March, and April 1936  issues of Astounding Stories, At the Mountains of Madness has been published many times since and in more recent years adapted into songs, musicals, graphic novels, radio serials, and more. The very latest adaptation is none of these, but an illustrated version of the novel. At the Mountains of Madness is published by Free League Publishing, a publisher best known for roleplaying games such as Mutant: Year Zero – Roleplaying at the End of Days and Forbidden Lands – Raiders & Rogues in a Cursed World, this is not the publisher’s first such title. That would be The Call of Cthulhu, the classic of American horror literature and the short story that is arguably H.P. Lovecraft’s most well-known. As with that classic, the Free League Publishing edition of At the Mountains of Madness is fully illustrated by French artist François Baranger and presented in a large 10½ by 14 inches folio format.

However, this is only At the Mountains of Madness Volume I. Running to just sixty-four pages, the text of the story only takes the protagonists as far as the upper reaches of the Elder Thing city, it closing at the point where the protagonists are preparing to enter the city’s subterranean depths. Fortunately, the fact that  the reader will need to wait for the second part to see more of Baranger’s gorgeous artwork is the first volume’s only downside (all right, to be fair, the large format of the book makes it difficult to place on almost any book shelf). This though should not persuade the reader from perusing the gorgeous pages of At the Mountains of Madness Volume I, for Baranger illustrates every page, brilliantly realising many of the novella’s many scenes. These begin in the dusty halls of Miskatonic University, quiet and contemplative, Doctor Dyer putting pen to paper to warn the upcoming expedition, before leaping into the joy and hope of his own expedition as it sets sail from Boston for the South Pole. There, the large folio format grants space to capture the sense of scale to the expedition’s task, to the southernmost continent itself, and ultimately the city of the Elder Things itself, with wide, glorious vistas of the Antarctic and later the shattered, alien city—all bare, starkly white and icy. A later piece inverts this, depicting Dyer and his colleague, Danforth’s flight through the city with a dizzying sense of depth as it threads its way between colossal ruins.

Contrasting this is the closeness of the expedition, working and discussing the discoveries made, almost huddling together for warmth and to maintain a human connection. Here the colours are darker and use muddier tones as the expedition discovers the remains of the Elder Things in the caverns below the ice and later perform autopsies upon them. There is a nod to The Thing in these scenes, dripping menace and mystery as the weird corpses thaw and strange fluids fall to the floor, drop by drop. Baranger’s final illustration is subtly ominous, the stonework of the wall around the entrance to the tunnel below the Elder Thing city casting a skull…