Jonstown Jottings #33: The Dregs of Clearwine 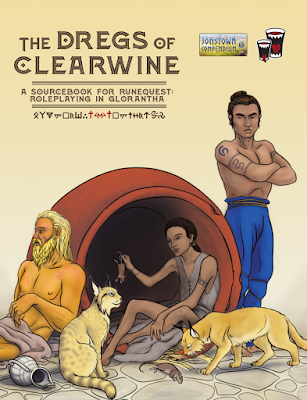 What is it?
The Dregs of Clearwine: A Sourcebook for RuneQuest: Roleplaying in Glorantha presents the ten households, twenty-five fully written up inhabitants and more, plus maps and plot hooks of the Dregs, a ‘mini-slum’ in the corner of the tribal city of the Colymar for use with RuneQuest: Roleplaying in Glorantha.
It is a fifty- page, full colour, soft cover book.
The layout is clean and tidy, and many of the illustrations good. It needs a slight edit.

The Dregs of Clearwine is specifically set north of the Ram’s Head Inn in the tribal city of the Colymar. With some adjustment it could be moved to another Sartarite city.

Who do you play?
No specific character types are required when encountering the inhabitants of The Dregs of Clearwine. Ducks will find a ready home, but Trolls are unlikely to be welcomed.
What do you need?
The Dregs of Clearwine requires RuneQuest: Roleplaying in Glorantha as well as The RuneQuest Gamemaster Screen Pack for wider information about the city of Clearwine. The RuneQuest: Glorantha Bestiary may be useful for details on Ducks and The Smoking Ruin & Other Stories details NPCs who may be important to the inhabitants of Clearwine. To get the very fullest out of Dregs of Clearwine, both Cults of Glorantha and the Sartar Homeland Book will be useful.
What do you get?
The typical supplement for RuneQuest: Roleplaying in Glorantha focuses naturally on adventurers and the great and the good and the bad, that is, Player Characters and NPCs who possess the agency and freedom to go anywhere or do anything. The Dregs of Clearwine: A Sourcebook for RuneQuest: Roleplaying in Glorantha is radically different, focusing on the lives and loves of those further down the social ladder. It details the ten households of the ‘mini-slum’ and their inhabitants as well as the various itinerants and others who live and work in the ‘Dregs’, right down to the ‘down and outs’. The majority of these are fully statted up and nicely illustrated, and all include detailed descriptions of their hopes and relationships with others in their household and the wider community. For example, Onjeem Charcoal Carrier, is a Lunar Tarshite scribe who was a Seven Mothers missionary until the advent of the Dragonrise after which his hand was broken as punishment. Consequently, he was forced to live in the Dregs, trying what save what monies he can to pay to heal his hand by hauling in charcoal daily for Turi the Potter’s kilns, despite the fact that he is looked down upon by Turi’s sister-in-law, Adinna for his Lunar sympathies. This is because Adinna is from Dangerford and the Dolutha clan, which were known Lunar sympathisers, so she does not want to be reminded that she too, is an outsider in the Dregs. Onjeem occasionally receives a little help from Mamma Vorlena, the neighbourhood’s matriarch who mothers everyone in the Dregs and is in love with Minya, the older sister of Furli the Brawler, a pugnacious farm worker who overly protective of all three of his sisters and is prepared to use his fists to protect them and their honour. Every NPC is treated in this way so that there is a web of connections across the ten households of the Dregs.
The ten households include the potters, the kiln jars—where abandoned great apithios jars provide shelter for those where nowhere else to go, the Widow’s House—where lodgings may be found, the Flop Nest—a public nest of straw bed boxes popular for the Ducks that work the river that runs alongside the city and where merchants might be able to find out who attacked their boats and why, and more. Every household is accompanied by a big box of plot hooks—and that in addition to a selection of general plot hooks, a side elevation of the house, and the maps of the neighbourhood includes a rooftop map as well as a footprint map showing the floorplans of the mostly one-room households. Throughout, sections of boxed texts cover supplementary information, ranging from daily rituals, aspirational goods, and making pots to how the community handle justice, charcoal carrying, and family in the Dregs. Rounding out The Dregs of Clearwine is ‘Old Bones’, a murder mystery of a sort built around several of the NPCs in the community. It would work as a nice set piece alongside the supplement’s plethora of plot hooks.
At the heart of The Dregs of Clearwine is very nicely constructed web of relationships and sense of community that the supplement’s many plot hooks dig their barbs into. There is material here that could fuel session after session of roleplaying as the Player Characters come to involve themselves into the doings of the Dregs, but getting them involved may require just a little more effort given that the Player Characters are likely to be higher up on the social ladder than the community’s inhabitants. There are plot hooks included that will do that, but they are not immediately obvious and perhaps they could have been made more obvious or perhaps a box of plot hooks to pull the Player Characters into the Dregs and the lives of the inhabitants could have been included.
The set-up of The Dregs of Clearwine however, suggests another possibility. That is to run it as a mini-campaign location with the Player Characters are inhabitants of the Dregs, either having grown up there or forced to live there due to reduced circumstances. This would lead to a campaign of small lives, but strong emotions, essentially a soap opera amongst the dregs of Clearwine a la the BBC television series, EastEnders or the ITV series, Coronation Street. It is a pity to that the supplement does not include ready-to-play sample Player Characters or guidelines to create such characters, but perhaps that is scope for such supplementary support.
However the Game Master decides to use The Dregs of Clearwine: A Sourcebook for RuneQuest: Roleplaying in Glorantha, it is full of detail, flavour, and rife with roleplaying and adventure possibilities.
Is it worth your time?
Yes—The Dregs of Clearwine presents a rich slice of almost soap opera life that will involve your Player Characters in the big stories of small lives, whether they are simply visiting or even residents themselves.
No—The Dregs of Clearwine presents a rotten corner of Clearwine and your campaign may not even be set there, let alone want to pay a visit.
Maybe—The Dregs of Clearwine presents an array of NPCs, relationships, and plot hooks which the Game Master can adapt to other locations if she does not want to use them as written.
Posted by pookie at 12:00