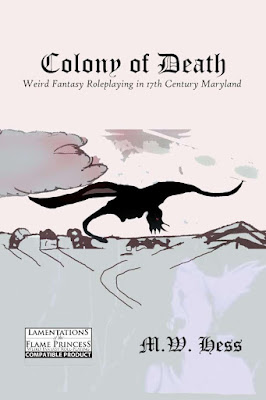 Colony of Death – Weird Fantasy Roleplaying in 17th Century Maryland is a campaign setting set in the New World of the mid-seventeenth century. Designed for use with Lamentations of the Flame Princess Weird Fantasy Roleplaying, but easily adapted to the retroclone of your choice, it takes the Player Characters to the Americas, but not where you would expect. In general, when a supplement is set in early colonial America, it is set in Massachusetts, or elsewhere in New England. Examples of this includes Atlas Games’ Northern Crown and StatCom Simulations Inc.’s 1983 Witch Hunt. The setting for Colony of Death though, is further south, the rough and ready Maryland Province, which in 1650, is not even twenty years old. Although the war between King and parliament back in England led to an uprising in the province, this was put down, and the governor reinstalled, as was its policy of religious tolerance between Protestants and Catholics. Also restored was its promise of fifty acres of land to farm for each new settler—and this a potential reason for the Player Characters to come to the frontier of the empire that is the young Maryland Province.

Colony of Death starts with the history of the new province, how King Charles I of England granted its charter to Lord Baltimore to the recent war with the Susquehannock natives and their allies from nearby New Sweden; the various peoples of the colony, including Catholics, Protestants, indentured servants, Virginians who want to claim the area, natives from the various tribes of the area, and more; and details of diseases rampant in the area, such as Dysentery, Hookworm Infestation, and Yellow Fever; and encounter tables for the various terrain types in and beyond the province. A lengthier section is devoted to a bestiary of the region, detailing the varied creatures and things to be found in Maryland. These include the mundane, such as the Black Bear and the Black Widow Spider, alongside a number of monsters, for example, the Goatman, said to be the devil and to haunt the forests west of the Chesapeake; the Hexenwolf, a type of lycanthrope also found in Maryland’s woods and its arch enemy, the Schneller Geist, or Snallygaster, a dragon-like best. Stats are also included for English pirates and natives, and the monsters also veer into Mythos territory with the inclusion of the Mi-Go and the Sasquatch. However, none of these count as the oddest threat in Colony of Death, and that award goes to a Squirrel Swarm. Altogether, the range of the monsters in the book covers a number of genres—more traditional combined with folklore the Hexenwolf, for example, whilst the Mi-Go are definitely Lovecraftian.

Roughly half of Colony of Death is devoted to the supplement’s four scenarios. The first of these is ‘St. Mary’s Shoemaker’ takes place in St. Mary’s City, the capital of the province. Still suffering from the aftermath of The Plundering Times—the Protestant Uprising during the time of the English Civil War, the people of the tiny city are shocked to learn that the body of a well-dressed woman has been found in a nearby river, minus her feet! This is more of a scenario set-up and the opportunity to detail St. Mary’s City than a plotted scenario and the Referee will need to develop a good reason for the Player Characters to be visiting the city, let alone investigating a podophiliac murder.

However, if the Player Characters are successful in investigating the strange death, ‘St. Mary’s Shoemaker’ does set up the second scenario. ‘Hell’s Bell’ takes them exploring or surveying up the Potomac River, perhaps visiting a parcel of land they have been given. On their way, they pass through the village of Lebenstadt, settled by Germans and notable for the large, engraved bell hung at its centre. The people of Lebenstadt are welcoming and hospitable, but hide a supernatural secret which is revealed when the settlement is attacked by another creature. Again, this is more of a set-up than an adventure with a plot and there is the possibility that even if the secret is revealed, that the Player Characters walk away from the village with nothing really happening. Another settlement, a Swedish trading post, beset by attacks by a red-haired giant, is the location for ‘The Hand and Eye of Loki’, the third scenario. If the Player Characters have reason to visit the trading post, there is more reason for them to get involved and this scenario is stronger for that and its greater use of Europeans’ historical involvement in the New World. The last scenario in Colony of Death is ‘To Burn a Witch’ and it oddly takes the Player Characters out of Maryland and across the Delaware River and to the city of Providence. There they come across the sight of the city’s Puritans burning a young girl accused of witchcraft. This is not really even a set-up , more of an encounter in which the Player Characters can choose to get involved in or not. If they refrain, nothing happens, but even if they do, ‘To Burn a Witch’ does not explore the ramifications. Ultimately, it suffers from being based around twentieth century attitudes towards what is a horrid happening rather than the attitudes of the period.

Rounding out Colony of Death is a lengthy appendix. This gives tables of names suitable for the region, including Algonquin, English, and German, an expanded map of the region, and a guide to growing tobacco in Maryland—which turns out to be really hard work! This is all useful content and the latter guide adds depth to making a life in the province.

Physically, Colony of Death is reasonably well presented. The maps are okay and if the artwork is amateurish in style, it at least works well enough for all that.

Although Colony of Death – Weird Fantasy Roleplaying in 17th Century Maryland is to be welcomed for taking Lamentations of the Flame Princess Weird Fantasy Roleplaying (and other retroclones) to the New World and a hitherto unexplored region of the New World, as a supplement it is underdeveloped. It could have done with reasons for bringing the Player Characters to the New World—and Maryland in particular, and for involving them in the scenarios. Perhaps also some rumours that the Referee could develop into scenarios and help get the Player Characters get more involved in the region would have also been useful. As would a bibliography and perhaps a look at the folklore of the region, especially for the Referee who wants to bring it further to life.