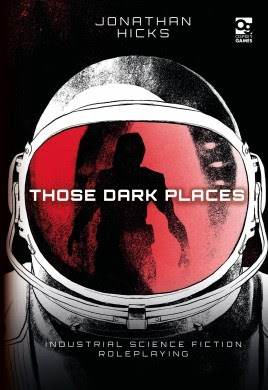 In the ecologically ravaged future, twelve billion people live on Earth in environmentally sealed kilometre high city blocks clustered around ‘lungs’, the colossal city-sized atmosphere processors located on the coasts. They grow and  process the algae that provides humanity with air, and eventually, food. Life is about surviving, but there is a way to make it better—work in space. Sign up to crew the service vessels maintaining stations, outposts, and mines in other star systems; the tugboats hauling the refineries back to Earth; the Arbiter ships as Colonial Marshals investigating crimes on behalf of the Interstellar Department of Trading; as military units preventing (or even conducting) civil unrest or hostile takeovers; as scientific survey teams; or as Deep Space Support Teams—DSSTs, or ‘Dusters’, effectively serving as troubleshooters for their employers. Last twenty-five years and you get to retire to a life of luxury. However, it is not that easy…

Space travel takes time. Even with the Gravity Assisted Drive, a minimum of a week per light year. It means that trips can take months with most of that time spent in LongSleep. Fortunately, that time counts towards time served. When not in LongSleep crews work to maintain their ship, because if anything went wrong, it could be weeks before anyone responded. Starships are not luxurious, but places to work and protect you from the vacuum of space, radiation, and random asteroids. Yet despite the safety standards, there are budget considerations, especially if your employer is a corporation, and whilst your ship might protect you, it will still have been built on the cheap. The same goes for outposts and mining facilities and the few settlements on other worlds—for no one has struck it lucky and found the equivalent of an Earth as she was planet. So living and working space is rough, hard, and sometimes lonely. And that is before you consider the dangers of corporate feuds, off-the-books scientific research, the psychological stresses of working cooped up with others for long periods, and then there is always the unknown…

This is the set-up for Those Dark Places: Industrial Science Fiction Roleplaying, a roleplaying game inspired by the Blue Collar Science Fiction of the nineteen seventies and early nineteen eighties, such as Alien, Outland, Silent Running, and Blade Runner, plus computer games like Dead Space. Published by OspreyGames—the imprint of Osprey Publishing best known for its highly illustrated military history books—Those Dark Places is its third roleplaying game after Paleomythic and Romance of the Perilous Land. Although it very much wears its influences on the hard-wearing material of its sleeves, Those Dark Places is not necessarily a Science Fiction roleplaying game in which the crew will encounter strange aliens which morph into xenomorphs that want to hunt them and turn them into incubators. This is not to say that it could not be, but that is very down to what type of game that the General Monitor—as the Game Master is known in Those Dark Places—wants to run. Instead it is a game of environmental horror and dread, of loneliness and fear, of stress and strain, at the limits of mankind’s survival. Expect encounters with crazed killers driven to madness and murder by loneliness and never being able to walk under an open sky—or poisoned by their environment or the drugs they have been taking to numb the boredom; feuds over scientific discoveries and research which have escalated from industrial espionage to open conflict between corporate militaries; scientific discoveries and research gone to devastatingly deadly effect and which a corporation will do anything to cover up or prevent from being stolen; and more…

Warrant Officer Grieg is an Engineering Officer aboard the CSV Lullaby, a commercial tug owned by Bellerophon Incorporated. He is six years into his contract and is a strong advocate of workers’ rights. He is always the Union representative on any vessel he serves aboard.

Mechanically, Those Dark Places is very simple and requires no more than a six-sided die or two per player. To have his Crew Member undertake a task, a player rolls a six-sided die and adds the values for the appropriate Attribute and Crew Position. The target difficulty is typically seven, but may be adjusted down to six if easier, or up to eight if more difficult. If the task warrants it, rolling the target number exactly counts as a partial success rather than a complete success. In that case, the player needs to roll over the target difficulty. Combat uses the same mechanics, with damage inflicted being deducted from an opponent’s Strength. A Crew Member is unconscious when his Strength is reduced to zero and dead when it drops to minus two. Sample damage is just one for a punch, three for a pistol, and four for a rifle.

One issue with Pressure Level and Episodes is that a Crew Member cannot immediately recover from either. It takes time in LongSleep or back on Earth to even begin to recover… Worse, once a Crew Member suffers an Episode, its effects linger, and he can suffer from it again and again until he manages to control his personal demons.

And that is the extent of the rules to Those Dark Places. For the General Monitor, there is a more detailed discussion of how they work, the various roles or Crew Positions aboard ship, the types of campaigns that can be run—typically based around the type of ship that the Crew Members are operating. So tugboats, passenger ships, science vessels, arbiter ships, tactical vessels, and more, each suggesting ideas about what such a crew would be doing and it might be tasked with doing. These are accompanied with descriptions of the types of reports that the Crew Members will be expected to make. These include Personnel Reports, Accident Reports, Industrial Espionage Reports, and more. Essentially combine a Personnel Report and a ship type and a General Monitor has a decent selection of campaign ideas to inspire her. Rounding out Those Dark Places is The Argent III Report, a complete scenario surrounding the sudden appearance of a research vessel thought lost for decades. It is playable in a session or two.

Physically, Those Dark Places is well presented, although untidy in one or two places. The artwork is good, definitely showcasing its inspirations.

Although clearly inspired by films like Alien, Those Dark Places is not a roleplaying game about facing strange, horrible creatures. This is reflected in the fact that there are no rules for creating such things in the book. Indeed, the rules for creatures focus on creating pets like cats and dogs for companionship in space rather than monsters. There are though, rules for running and playing Synthetic Automatons if the General Monitor includes them. Essentially, Those Dark Places is about facing horrors human and environmental rather than actual monsters. Nor is it a roleplaying game with a set background, although one is outlined should the General Monitor want one. At two pages, even this background is short enough to allow the General Monitor room aplenty to insert content of her own, that is if she does not want to create a background of her own.

However, all of this is not about roleplaying Blue Collar or Industrial Science Fiction and Horror in space—although Those Dark Places could be run like that. In actuality, what Those Dark Places is about is applying for a career working in deep space. The process of creating a Crew Member, of filling in a CASE File, is writing the application form. And then, the playing of Those Dark Places is not roleplaying missions out on the frontier, but simulations—run by the interviewer as part of the application process—run to test their suitability for working between Earth and the frontier of space. All of this is delivered in an game voice that is a mix of wearied tone, corporate cheeriness, and faux ‘I believe in you’ attitude of a Human Resources interviewer that manages to both capture the tiresome nature of applying for employment and make the reader/potential Crew Member want to punch the writer/speaker. It is a brilliant conceit which creeps up on the reader as he works his way through the book.

Unfortunately, Those Dark Places is being released when there are already two roleplaying games within its genre, the Alien Roleplaying Game from Free League Publishing and Mothership Sci-Fi Horror RPG from Tuesday Knight Games, both having been released relatively recently onto the market. However, Those Dark Places is very much its own thing, a combination of simple mechanics and human and environmental horror—plus its simulation/employment application conceit rather than necessarily being a game of facing horror and horrible monsters in deep space or being based on a licence.

Combining light mechanics and an easily familiar genre, Those Dark Places: Industrial Science Fiction Roleplaying is a pleasingly accessible treatment of Blue-Collar Science Fiction of the seventies and eighties. It enables the General Monitor to run simulations in which the horror lies not only in isolation and what we might find on the fringes of space, but also in what humanity brings with it.