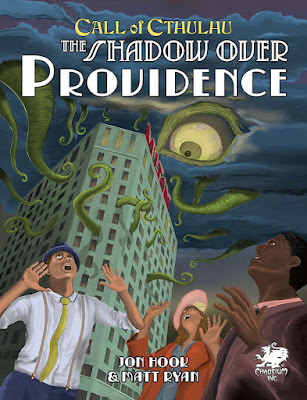 The Shadow Over Providence is a short, one-shot, one-session scenario for Call of Cthulhu, Seventh Edition. Published by Chaosium, Inc. to celebrate NecronomiCon 2019, it is mostly set within the confines of the Milton Hotel, based on Providence’s iconic Biltmore Hotel in the year 1928. In addition to a number of other events, the hotel is playing host to ‘The Kingdom of Fire – Egypt’s 18th Dynasty.’ This is a travelling exhibition showcasing some of the finest exhibits and artefacts from the British Museum, including treasures of Tutankhamun and Hatshepsut, and a prize exhibit, the mysterious canopic jar of Ibnhotep the Mad! Whether attending the Sterling-Homes Wedding Reception, the Society of Geological Sudies Annual Convention, or visiting the hotel because of the exhibition, all of the Investigators will have given tickets to see it and as the scenario begins, will be perusing its displays. However, as any good Call of Cthulhu player knows, almost nothing good can come of having Ancient Egyptian artefacts on display—and so it is with The Shadow Over Providence. Within minutes of it starting, it is lights out and away we go—a robbery, a bizarre and grizzly death, a crime to be investigated, abductions of guests and staff—and more… Just what is going on in Providence’s most famous hotel?

The opening scene of The Shadow Over Providence is actually tightly scripted, but this script sets everything up and does it with a bang—or a fusillade of bangs! Once the lights go on and the investigation, the likelihood is that the Investigators will be deputised by the local police and so will have permission to investigate the robbery and both the mundane and the outré deaths on the night. Barring a single excursion to the city’s morgue to examine one or more of the corpses that turn up during the scenario, The Shadow Over Providence is set within the confines of the Milton Hotel. There are actually just a few locations for them to investigate in the hotel and relatively few NPCs for them to interview, and the scenario will play out slightly differently and be more of a challenge if the Investigators are not deputised. So probably more like a traditional Call of Cthulhu scenario.

Beyond the initial scenes, there are no set events in The Shadow Over Providence, meaning that at the same time as the Investigators carry out their efforts, the Keeper will be pushing events along with an expanding number of strange deaths and disappearances, including potentially, attacks upon the Investigators. There is a sense throughout that the Investigators and the hotel guests are being hunted and stalked through the halls and walls of the Milton Hotel, and despite the size of the building, there is a claustrophobic feel to The Shadow Over Providence. Ultimately, the Keeper will stage a confrontation between the Investigators and the antagonist, its nature depending upon the actions of the Investigators so far. This does mean that although the scenario is of a length and suitability to be run for inexperienced players or those new to Call of Cthulhu, the open structure of the scenarios mean that it better suited to be run by a more experienced Keeper.

One of the strengths of The Shadow Over Providence from the outset is that it can and does bring a diverse group of characters together to investigate the mystery at the heart of the scenario. The six pregenerated Investigators, for example, include a Sikh Psychiatrist from India, a New England elementary teacher, an African American journalist, a Moroccan artist, one of the hotel’s concierges, and the hotel handyman. One issue with these is that they do not have all of the skills listed in the checks throughout the scenario—Locksmith and Egyptian Hieroglyphs in particular. Neither issue is insurmountable should the Keeper allow her players some extra skills points with which to customise their Investigators. Were the players to create their own investigators, this might be less of an issue. Similarly, were the players to create their own investigators, they could also be of almost any background as long as they have a reason to be at the Milton Hotel—the scenario providing three already. That is, the wedding reception, the geology symposium, and of course, the Ancient Egyptian exhibition itself. Then, once the Investigators have successfully solved the mystery behind the horrid events that follow the opening of the exhibition, they have a reason to know each other and a reason to investigate similar mysteries. In this way, The Shadow Over Providence works  as a ‘Gateway’ scenario to further adventures and mysteries, just as much as it does a one-shot.

Should one of the Investigators die during the scenario, it is suggested that he be replaced by one of the NPCs. However, some of these NPCs have abilities more akin to those of Investigators created for Pulp Cthulhu: Two-fisted Action and Adventure Against the Mythos, so the Keeper might want to be careful in selecting which one she assigns to a player whose Investigator has been killed. Another issue is that one of the NPCs knows more about the attempted robbery than any other NPC. This probably makes that NPC unsuitable as a replacement Investigator, but the Keeper could actually develop the NPC into a full Investigator right from the off and include it amongst the starting Investigators. Doing so would add a degree of Investigator versus Investigator conflict to the play of The Shadow Over Providence, which could be entertaining if run as a convention scenario or for more veteran players.

Physically, The Shadow Over Providence is as cleanly laid out as you would expect for a Call of Cthulhu, Seventh Edition, although it is in black and white rather than colour. It is generally well presented with suitable illustrations of Ancient Egyptian artefacts. The floorplans of the Milton Hotel are simple and clear, if small, and appropriately for the scenario, includes the air ducts. For all that the scenario is set in a real world location, it is a pity that none of the illustrations depict—if not the actual hotel the scenario’s Milton Hotel is supposed to be based upon, then of a similar hotel to help the Keeper describe the building to her players. Indicative of both the shortness of the scenario and the focus upon the diverse cast of Investigators is that half of The Shadow Over Providence is made up of the pregenerated Investigators.

After its opening action, The Shadow Over Providence settles down into a haunted house—‘haunted hotel’?—style scenario in which the Investigators are hunted as they themselves hunt for clues. This requires careful handling by the Keeper to maintain the pacing, but in the right hands The Shadow Over Providence delivers a solid balance of creepy investigation and scary action, whether as a one-shot or potential campaign starter.