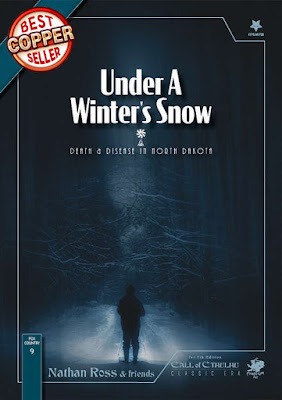 Under a Winter’s Snow: Death & Disease in North Dakota is a scenario for use Call of Cthulhu, Seventh Edition. Published by Stygian Fox, it is set early in the Jazz Age in North Dakota in the wake of the Great War and the 1918 Pandemic. Amidst a flurry of snow and ice in January, 1921, the inhabitants of the town of Eisner have been struck by a strange disease which leaves them sweating, shivering, and penultimately delirious before they die. The local doctor has been overwhelmed by the rash of deaths, which he fears to be another outbreak of the Spanish Flu. However, in the victims’ delirium, they whisper of a shrouded man seen in both their dreams and on the streets of Eisner, and of superstitions long forgotten in this modern age…

It should be noted that Under a Winter’s Snow deals with an outbreak of a disease with flu-like symptoms. Published in 2020, but before the outbreak of the current pandemic, it means that it has strong parallels with contemporary events. The scenario’s themes of disease, infection, and contamination may mean it is not suitable for some players. The Keeper is advised to consider the ramifications of such themes before deciding to run Under a Winter’s Snow.

In the default set-up for Under a Winter’s Snow, the Investigators are county officials sent into help with the outbreak. Alternatively, they might be law enforcement tracking a strange individual who has been spreading chaos and madness since his return from the Great War or standard Call of Cthulhu Investigators who have been caught in Eisner during the dreadful weather. A fourth is given, that of the players taking the roles of members of the local youth, caught up in the winter and the dreadful situation with the disease. This though, is not the advised option as the Investigators are not meant to be residents of the town and is not supported by the scenario itself.

Under a Winter’s Snow is relatively short and it is very likely that the Investigators are going to be quickly mystified as to the cause of the disease and its source. This being a scenario for Call of Cthulhu, Seventh Edition, of course means that the disease has an unnatural cause, but getting to that source is going to be challenging for the players and their Investigators, whilst presenting the clues to that end, is going to be challenging for the Keeper. The scenario has a timed element, one that sees both more and more of the townsfolk infected and some of the Investigators infected. A nice touch is that being infected may actually open up some clues to the Investigators as well as drive them to investigate first the disease, and then perhaps beyond the disease itself… However, the scenario ultimately turns on the activities of a single NPC which the Keeper will have to very carefully roleplay—first portraying the NPC as innocuous, even helpful, but later as seeming to know more, until it is clear that the NPC is somehow involved. Here perhaps the Keeper can have some fun roleplaying an NPC who despite being insane might actually help the Investigators and in return, want their help, but not necessarily from the same motive.

Physically, Under a Winter’s Snow is tidily presented, but is lightly illustrated and needs another edit. The handouts are reasonable, but there is no map of the town. One of the handouts sort of doubles as a map, but only after the Investigators have done a particular action, and then it is a hand drawn piece, very rough, and very much at odds with the cartographic standards usually set by Stygian Fox.

Originally published as part of Stygian Fox’s Patreon, Under a Winter’s Snow feels rushed and not sufficiently developed to stand on its own as a scenario for Call of Cthulhu, Seventh Edition. It leaves too much for the Keeper to detail herself, whether that is the town of Eisner, a map of the town of Eisner, the names of the victims of the disease, the names of various NPCs, and so on. It could have included pre-generated Investigators, especially if they have been sent by the county authorities to help the town’s doctor, and if not that, then at least given some suggested roles and Occupations. Either option would have worked if the scenario is being run as a one-shot. If not as a one-shot, as written the time period of the early nineteen twenties and remote location of North Dakota makes Under a Winter’s Snow difficult to bring into a campaign, but ultimately, the location is irrelevant because the scenario does nothing with it and so is easy to shift elsewhere, whether that is Lovecraft Country, the north of England, rural France, or even Germany.

Under a Winter’s Snow is not as fleshed out as it could be and feels much more of a magazine scenario than one that warranted a release on its own. It offers an interesting roleplaying challenge for the players and their Investigators in dealing with an NPC who has succumbed to the Mythos, but will require some effort upon the part of the Keeper to bring both setting and plot to the table.