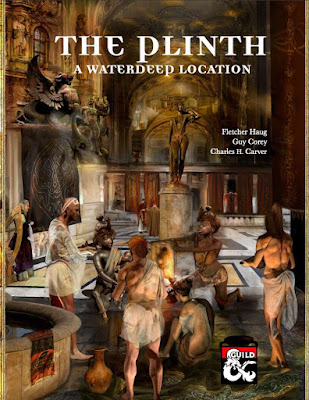 Waterdeep is a city of many faiths, yet there are many in the City of Splendours that lack wealth, influence, or congregation to build a temple of their own, let alone a cathedral. Each year though, on Plinth Day, the adherents of such faiths compete in displays of devotion in order to awarded one of the twenty shrines within the building known as the Plinth. This is a six-storey tower, slim, but with many balconies and home to the aforementioned shrines where those of the faiths that were successful on Plinth Day may come to worship without fear of condemnation or prosecution—whether be followers of Law or Chaos, or Good or Evil. Since the faiths with shrines in the Plinth must adhere to the rule of tolerance, civility, and respect, the multi-denominational, square tower is somewhere the agents of faiths and other organisations come to meet—though there is no knowing who might be watching, inside or out… The tallest building in Waterdeep, the Plinth is not only a well-known landmark, it is also home to a griffon cavalry guard station, a plum assignment for any member of the city’s griffon riders.

The Plinth: A Waterdeep Location is published by The Eldritch Press and as the title suggests, describes a location in the City of Splendours, perhaps the most important city in all of Faerûn. Thus it is a supplement for Dungeons & Dragons, Fifth Edition, one that details the building itself, the occupants of the twenty shrines—from Auril, goddess of winter and Azuth, god of wizards to Talos, god of storms and Umberlee, goddess of the sea, descriptions of four NPCs and stats for a total of eleven, four quests, floorplans of all six levels of the Plinth, and a heresy. The NPC stats include generic characters and creatures such as the Flight Captain and Griffon Mount, but also entries tied to the quests, such as the Green Ghost which rises from the City of the Dead and everywhere it wanders, it withers the greenery and fresh flowers placed by the faithful of Eldath, goddess of peace, at the graves, and the Southern Assassins and Southern Rogues who will be instructed to deal with the Player Characters should they be taking too much of an interest in the fact that the masters of the Southern Assassins and Southern Rogues have been seen buying poison! Of course, The Emerald Enclave would like the Green Ghost laid to rest and The Lords’ Alliance would be very interested to learn about the purchase of certain poisons… The four quests range from Second Level up to Seventh Level, so the likelihood is that if the Dungeon Master uses all four, the Player Characters will be coming back to the Plinth more than once.

Perhaps the longest section in The Plinth: A Waterdeep Location—certainly the longest section of text—is dedicated to the Mother Source Heresy. Prior to its adoption as a multi-denominational establishment, the Plinth was a sacred monument to the goddess Selûne. Acolytes of the Seekers of Selûne are known to visit and wander the Plinth, communing with the building and chanting verses, sometimes even being struck by profound visions. Their activities are linked to holy fragments of a magical earthen vessel, known as the Mother Source Fragments, that suggest that there was an ultimate godhead and primeval Source-of-Realms to an unknown Goddess. Or it might be an aspect of an existing goddess, such as Selûne or Mystra and this interpretation has led to the rivals claiming that the interpretation is heretical.

The Plinth: A Waterdeep Location is very nicely presented. The artwork is excellent and the layout clean and tidy. Overall, this is a highly attractive supplement.

The obvious ties of The Plinth: A Waterdeep Location to Waterdeep make it difficult to use elsewhere and whilst it will be easy enough for the Dungeon Master to develop the four quests, it is pity that they do not tie into the Plinth as strongly as they should. Similarly, for all that the Mother Source Heresy is interesting, there are no quests actually using it or involving the Player Characters in it, so unlike the quests, it is not going to be all that easy to bring into a game or campaign. Perhaps in need of a little more development and support for the Dungeon Master, The Plinth: A Waterdeep Location does a decent job of presenting an interesting location and handful of NPCs—and presenting in a highly attractive fashion.