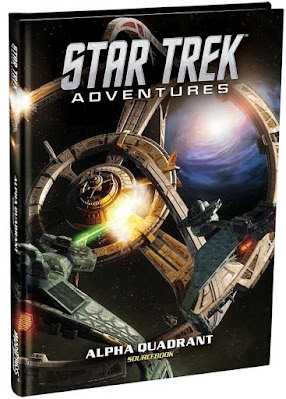 The slimmest book to date for Star Trek Adventures, the Alpha Quadrant Sourcebook is essentially a series of briefings given by Benjamin Sisko, the commander of Deep Space 9, to a Starfleet starship captain assigned to the quadrant. In turn, it covers the recent history of the quadrant with the recent liberation of Bajor from Cardassian occupation by the Bajoran Resistance, the discovery of the Wormhole through to the Gamma Quadrant, incursions by the strange forces of the Dominion from the other side of the Wormhole, and the Klingon Empire’s withdrawal from the Khitomer Accords which have maintained peace between the Klingons and the Federation for decades. Three worlds of the Federation are covered in some detail, Betazed, Denobula—probably the prime section of information for a Star Trek: Enterprise campaign in the Alpha Quadrant Sourcebook, and Tellar Prime, the latter completing coverage of the founding members of the United Federation of Planets. These are presented in some detail, not just Betazoid physiology, but also their political structure, legal system, culture, important locations, and more. There is a lot of nice background here, such as the Temple of the Great Houses where information about the no longer existing Great Betazoid Houses is kept, but which can be restored if descendants can be found; Quok’lox Trash Island on Denobula where everything on planet that cannot be recycled is kept and is rumoured to be home to Denobulans living apart from the rest of the planet; and the difficulties of Tellarite-Andorian relations, the former with their love of antagonistic debate, the latter with their propensity for martial action. Bajor, the Cardassian Union, the Ferengi Alliance, the Tzenkethi Coalition, the Breen Confederacy, and the Tholian Assembly are all given similar treatment, so for Bajor it looks at the effects of the Cardassian Occupation, the Provisional Government, Bajoran spirituality, whilst Deep Space 9 and the Wormhole are detailed under Places of interest. Full stats are given for Starbase Deep Space 9 as well. Included in the background to the Cardassian Union are details of Maquis, the resistance movement that resulted from the Federation-Cardassian treaty of 2370 which created the DMZ and saw some colony worlds transferred to the Cardassian Union, whilst the Rules of Acquisition are discussed in the section on the Ferengi Alliance. Various worlds of the Cardassian Union and the Ferengi Alliance are also described.

From the Arbazan and the flight-cable, bewinged Aurelians—complete with rules for flight—to the Ktarians and the Zaranites, the Alpha Quadrant Sourcebook introduces eleven new species available as playable options, including the Ferengi, whilst the inclusion of the feline Caitains and the tripedal Edosians are sure to please fans of the Star Trek: The Animated Series. Some ten starships are detailed for the Cardassians, the Ferengi, the Breen, the Talarians, and the Tholians. These range from the Cardassion Hideki-Class Corvette and Keldon-Class Heavy Cruiser to the Spinner and Weaver vessels of the Tholian Assembly. As in other supplements for Star Trek Adventures, these are poorly illustrated, or not all, and as with the Beta Quadrant Sourcebook, there are no starships given for the Federation, but again, this is less of an issue.

There is a wealth of detail in the Alpha Quadrant Sourcebook, especially when it focuses upon the various polities at the far reaches of the quadrant and their particular worlds. The write-ups of the Betazed, Denobula, and Tellar Prime are all decent, as are those of the Cardassian Union and Ferengi Alliance, and the campaign ideas and adversaries all support the material in the supplement. Yet, the Alpha Quadrant Sourcebook is far from perfect. Its problems are fivefold. First, it is not the Alpha Quadrant Sourcebook, but the ‘Alpha Quadrant Sourcebook in 2372’, so there is no timeline and no sense of history to the region as if nothing really happened until recently. Second, it covers just a handful of worlds and third, whilst it gives numerous new species to play or use as NPCs, it does not give them a great deal of background or details of their worlds. In many cases, they are not illustrated either, leaving the Game Master to work with some really underwritten descriptions—for example, the reader is left with no idea what the Tzenkethi look like. Fourth, there is an avoidance of the technical elements that a Science Fiction setting and roleplaying game would seem to want. So, in addition to the lack of a timeline and the lack of illustrations for certain species, starships are not illustrated when detailed, worlds are pictured, but not mapped, and so on. Fifth, the writing is often unengaging, especially in the case of the sidebars, which all too often add flavour but not substance.

Physically, the Alpha Quadrant Sourcebook is a decent looking book. There are some inconsistencies in the layout, but otherwise the book is generally well-written and decently illustrated—though not always effectively—with a fully painted images. The layout is done in the style of the LCARS—Library Computer Access/Retrieval System—operating system used by Starfleet. So everything is laid out over a rich black background with the text done in soft colours. This is very in keeping with the theme and period setting of Star Trek Adventures, but it is imposing, even intimidating in its look, and it is not always easy to find things on the page because of the book’s look. The other issue is that the none-more black pages are easy to mark with fingerprints.