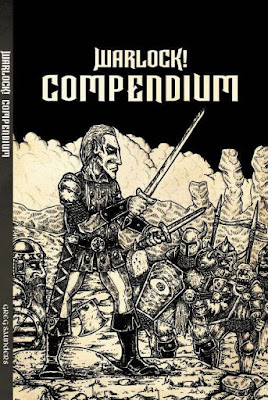 The Warlock! Compendium is the first supplement for Warlock!, the Old School Rennaisance-like Career and skills roleplaying game whose inspiration is a hybrid of Fighting Fantasy a la The Warlock of Firetop Mountain and Warhammer Fantasy Roleplay. Published by Fire Ruby Designs, it complies the first four expansions for Warlock!, each of which adds flavour and detail to the core rules, particularly when it comes to Careers and magic. In turn, adds new Careers for the non-human races of the Kingdom—or wherever the Game Master’s campaign is set, new magic, rules for magic from old body parts, and rules for what happens if you entreat the unholy powers.

The Warlock! Compendium opens with ‘Part 1: Different Paths’, in particular, ‘Community Careers’. One of major omissions in Warlock! was a lack of Careers for Dwarves, Elves, and Halflings. ‘Community Careers’ amends that with an expansion of the Career table in the core rules, which a player rolls on to determine his character’s first Career. This table extension adds six more, such as Dwarf Inventor, Elf Kin Guard, and Halfling Gong Farmer, which when rolled determine both a character’s first Career, but also his Community. This does not necessarily replace a player’s option to choose his character’s Community, but rather means that the character will definitely be a member of one if the right roll is made. Some of the Careers, such as Dwarf Tunnel Fighter and the Advanced Careers of Dwarf Slayer, Elf Champion, and Halfling Burglar, all feel very much inspired by a certain British fantasy roleplaying game. Warlock! however, is not a fantasy roleplaying game in which one Community is mechanically any different from any other, but ‘Community Careers’ adds potential flavour without adding any undue mechanical complexity or advantage.

‘Part 2: The Grimoire’ is all about magic. It starts by adding advice for discovering spells—essentially research, research, research—and copying scrolls. The latter is particularly trying, costing a wizard stamina which cannot otherwise be recovered. Now whilst this can be done, it definitely feels as if the author is persuading the wizard against such a rash action, suggesting instead that he concentrate upon exploration and the search already completed scrolls rather than create his own. This is followed by some forty spells, from Beam, Bleed, and Curse to Tremor, Whisper, and Yearn. These all fantastically gritty and down-to-earth, such as Dry, which protects the caster and anyone nearby from the rain, but makes all incredibly thirsty, or Glamour, which grants a bonus to the target for all actions where beauty is involved, but makes the target ugly and repulsive for several hours after the spell’s effects have worn off! ‘Rods, Staves, and Wands’ cover a wizard storing spells in them, whilst ‘Rare and Wondrous Artefacts’ adds a handful of magical items, typically with a sting the tail, such as the ‘Boots of Striding’ which enable the wearer to leap great distances, but with the chance that one boot will be left behind, the other at the destination, and the wear equally as split! ‘Lost Relics’ provides rumours of a handful of missing items, whilst ‘Community Spellcasters’ adds Advanced Careers for Dwarves, Elves, and Halflings capable of using magic, such as the Dwarf Runeforger, Halfling Conjurer—street magicians who use illusion and beguilement, and Elf Druid—who can sacrifice of the blood of sentient species for a much darker version of the Druid typically seen in fantasy roleplaying.

‘Part 3: Necromancy’ presents the dark arts of dealing with the dead and the undead, practitioners often beginning with contacting the spirits of the departed to learn their secrets and then it is a slippery slope to degradation and terrible power. Of course, in the Kingdom, the art is forbidden and outlawed. From Bind Spirit and Create Guardian to Spirit Speak and Summon Dead, some eight necromantic spells are given as well as detailing the dangers of necromantic miscasts and some necromantic artefacts.

‘Part 4: Corrupted’ covers the effects and consequences of the dark arts, another slippery slope to power for ambitious—or foolish!—wizard, but does actually detail how a wizard might take such a path. With the inclusion of the Cultist and the Death Knight—a sorcerer who has fallen under the influence of a demon, demonic marks and gifts bestowed upon such Death Knights, along with  demon swords, demon goblins, and descriptions of such demon masters as the Cthulhu-like Delock, Lord of the Depths and the demon lord of war, Pazaali, the Warlock! Compendium strays ever closer to Warhammer Fantasy Roleplay in emulating its inspiration.

Physically, the Warlock! Compendium is a handy, digest-sized hardback. It is decently illustrated throughout, the occasional roughness of the artwork contributing much to the British Old School style and look that Warlock! seeks to evoke. The book is well written and an engaging read, and everything within its pages is easy to grasp and pull out into a game.

Although it offers a little more than that, the Warlock! Compendium is very much the magic supplement for Warlock!, adding new spells, magical Careers, necromancy, the dark arts, magical monsters, and so on. As useful a set of additions and expansions as they are, it is the six Careers—the Community Careers for Dwarves, Elves, and Halflings which feel the most useful addition in the Warlock! Compendium, for in giving them something that is intrinsically theirs, they flesh out the core game rather than just adding to it. Plus, they do it without adding to the rules or mechanics—just the setting. The Warlock! Compendium is overall, a solidly sorcerous expansion for Warlock!