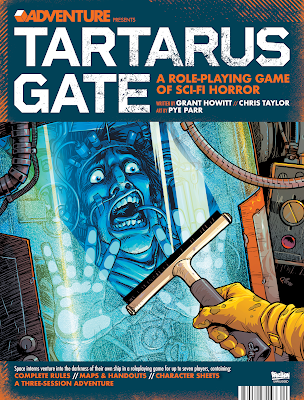 It has been almost thirty-five years since the publisher of Britain’s longest running Science Fiction comic, 2000 AD, dabbled in the field of roleplaying. Both times, it was with solo adventure books, first with the Diceman comic, and then with You are Maggie Thatcher: a dole-playing game, but that changes with the initial release of a new publication from Rebellion. This is Adventure Presents, essentially a complete roleplaying game and scenario in a magazine format. The first issue is Tartarus Gate – A Roleplaying Game of Sci-Fi Horror, from the designers of Spire: The City Must Fall. This consists of a simple roleplaying game and a full, three-session scenario designed for up to six players and the Game Master for which everyone will need three six-sided dice and some pencils. The Game Master will need to do some careful preparation, but Tartarus Gate – A Roleplaying Game of Sci-Fi Horror comes with everything necessary to play—six ready-to-play pregenerated Player Characters, a handful of NPCs, and some absolutely gorgeous cartography and art.

The setting for Tartarus Gate is the year 2130. For years, Earth has been dominated by the OBOL Corporation and in search of a better future—or at least proper employment, the Player Characters have taken positions as unpaid interns aboard the transport ship Charon, entrusted with shepherding cargo from Earth to the Tartarus Gate Waystation. Six months into the journey, they are awoken from their Deep Sleep Pods and after recovering from the process, they are given their first task. Visual feeds from the lower decks have gone down, but before they did, the computers registered that something was moving. All the interns have to do is descend to the lower decks, restore the visual feeds, and ensure that there is nothing moving down there that there should not be… The Charon is six months’ travel from the nearest help, so it is down to the interns. With luck, they can impress their employer and make their temporary employment permanent.

The format of Tartarus Gate is important. The centre twenty-two pages are intended to be pulled out. They start with the six four-page character sheets, each of which includes a briefing, the character description, equipment list, and deck plans of the Charon. Then they are followed by the various map handouts, all done in three dimensions and full colour, the four-page explanation of the rules for Tartarus Gate, and the eight-page GM Reference Book. This leaves the other twenty-two pages of Tartarus Gate devoted to the actual scenario.

A character or intern in Tartarus Gate is simply defined. He has four Abilities—Toughness, Agility, Smarts, and Wits—each ranging in value between one and four. He has a value for his Health and his Resolve—his willpower, the former as high as twenty, the latter as high as twelve. He also has three Drives, for example, Hasty, Selfless, and Haunted. Each character has a background and a given role, such as Veteran or True Believer, and an excellent illustration. It is left up to the player to name the character.

Mechanically, Tartarus Gate is simple and straightforward, its key mechanic, known as the ‘Adventure system’, best described as ‘roll three and keep two’—mostly. For his character to undertake an action, a player rolls three six-sided dice and removes one die. Which die depends upon the rating of the Ability being tested. If the Ability has a value of one, the highest die value is removed; if two, the die with the middle value is removed; if three, the lowest die value is removed; and if four, no die is removed, and all are counted. Either way, the total value of the remaining dice needs to equal or exceed the value of a Target Number to succeed, the Target Numbers ranging from six or doable to twelve or extremely difficult. The Game Master can adjust the difficulty of a task by temporarily increasing or lowering the Player Character’s Ability value. A supporting Player Character can help another and so temporarily increase the supported Player Character’s Ability, whilst the acting Player Character can spend Resolve to also increase his Ability value. Resolve can be regained by a Player Character pursuing one or more of his Drives and in Tartarus Gate, and may be reset at the beginning of some chapters, as can Health.

Combat in Tartarus Gate consists of opposed rolls. The lower roll is subtracted from the higher roll and the remaining value deducted from the losing combatant’s Toughness. Combat is designed—much like the rules in general—to be fast and in the case of combat, potentially deadly.

Tarsus Gate as a scenario is broken down into three chapters. In the first chapter, the Player Characters will waken from their Deep Sleep Pods and put through their paces as a ‘recovery process’, much like the first though steps of a video game as a player is taught the controls and what each button does. Given their assignment by Assisti, the ship’s AI, they make their way to the engine room and there they have their first and then second strange encounter—the former with a bloodless, mangled corpse, the latter with a figure from Earth’s recent and wrought past… This figure will come to dominate the mystery which lies in the bowels of the Charon and will be revealed as the Player Characters moves from one chapter to the next.

It should be no surprise that the plot and structure to Tartarus Gate is linear. After all, the Player Characters have been tasked with going from one end of a spaceship to another and the scenario is quite short. However, there is still plenty for them to do and explore, and interact with the handful of NPCs the Game Master has to portray. As well as the detailed NPCs to run, the Game Master also has events to throw at the Player Characters in every location.

The chapter breaks are also used as moments of reflection, for the players to check how the game is going and perhaps a chance for them to change their characters’ Drives if necessary. Tartarus Gate also makes clear that its play is meant to be fun—for everyone, and that if anyone is made uncomfortable, then he should raise his hand and say so.

Physically, Tartarus Gate is very nicely presented. It is well written, but what really stands out is the artwork—which is as good as you would expect from a publisher which puts out 2000 AD each week. If the illustrations are good, then the maps are even better. Overall, the production values, for what is just a ‘magazine roleplaying game’ are stunning.

Adventure Presents Tartarus Gate – A Roleplaying Game of Sci-Fi Horror is intended as a first roleplaying game and for the most part succeeds. Its combination of a simple, straightforward plot, set-up, and quick mechanics certainly supports that, as does the vibrantly exciting presentation. However, whilst it works as a first roleplaying game for those new to roleplaying, it is a slightly different matter for the prospective Game Master. If the Game Master has played a roleplaying game or two before, then this is not as much of an issue, but if the Game Master is coming to this totally anew, it will be more difficult for her. For the experienced Game Master, readying and running Tartarus Gate is relatively easy.

Adventure Presents Tartarus Gate – A Roleplaying Game of Sci-Fi Horror is an impressive first issue, an attractive package that is easy to pick up, prepare, and run—it could be ready to play in thirty minutes!