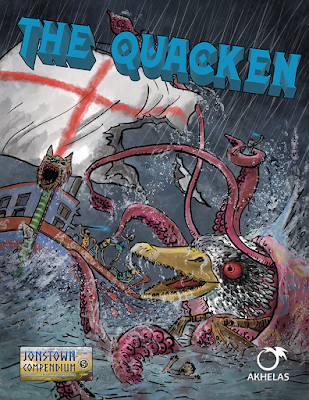 What is it?
The Quacken presents a leviathan monster and associated scenario for use with RuneQuest: Roleplaying in Glorantha.
It is forty-five page, full colour, 3.29 MB PDF.
The layout is clean and tidy, and many of the illustrations good. It needs an edit.

The Quacken is set in any coastal area or sea area around Genertela, although the default location for the associated scenario, ‘Clash with the Quacken’, is Mirrorsea Bay, off the coast of Esrolia.

Who do you play?
No specific Player Character types are required to play ‘Clash with the Quacken’, although sailors, fishermen, and anyone with the Darkness or Water Runes may have an advantage. A Shaman or anyone with Spirit Sight will also be useful and any good Orlanthi should relish the opportunity to confront the sea again.
What do you need?
The Quacken requires RuneQuest: Roleplaying in Glorantha. The RuneQuest: Glorantha Bestiary may be useful for details of Ducks.
What do you get?
The last in the ‘Monster of the Month’ series,* The Quacken presents a terrible creature, one which brings the land and the sea together, created during the War of the Gods when the Sea Tribe invaded the Earth, Magasta and an unnamed goddess. Essentially, giant squid with the beak and head of a duck, including feathers, and potentially, the bad temper of each. They notoriously aggressive, especially the females after they have come onto land to lay their eggs. Such females enter a state called ‘stupmi’ and vigorously drive off or consume anyone or anything which they see as a threat. Where females die after suffering through ‘stupmi’, males do not and may undergo bouts of it again and again. Males under its effects have been known to attack ships. However, the dead body of a Quacken can be harvested, its flesh sweet and best fried, the beak as a mild stimulant for Newtlings, the eyes for their oils, and their teeth as Death talismans!
*(Actually, The Quacken is not the last in the ‘Monster of the Month’ series, but it should emphasised that this could have been more clearly phrased by the authors.)

In addition to fully detailing what is, really, a weird leviathan, The Quacken includes a scenario ‘Clash with the Quacken’. This is coastal set scenario in which the Player Characters are hired to come to the help of Stone Dock Village. The village chieftain has been having terrible dreams of the ocean depths, merfolk, and a crimson, and this comes at time when the fishermen of the village are bringing in reduced catches. He fears that worse is to come and wants the Player Characters to discover the cause of what has beset the village. This will see the Player Characters going to sea, dealing with a very grumpy and direct shaman, and protecting Stone Dock, the huge slab of primordial rock  that is the village wyter.
The inspiration for the scenario is obvious, and whilst it does draw from Clash of the Titans, ‘Clash with the Quacken’ is very much its own, making it an epic confrontation between the land and the sea. It does need some careful staging in certain scenes—especially in the spirit world, but the scenario is well supported with some solid NPCs for the Game Master to roleplay. Although, multiple versions of the Quacken are provided in order to scale the final confrontation to the power levels of the Player Characters, ‘Clash with the Quacken’ is still a challenging scenario.
Is it worth your time?
Yes—The Quacken is a ridiculous idea. I mean, whoever would have thought of combining a Duck and a Squid? And yet... and yet, you know you are just waiting for someone to yell, “Unleash the Quacken!”
No—The Quacken is a ridiculous idea, like the ‘surf and turf’ equivalent of a Turducken. I mean, no. Really no. Let’s not even go there.
Maybe—The Quacken definitely falls under ‘Your Glorantha May Vary’. In fact, it probably strays into your ‘Your Glorantha DOES Vary’, but Glorantha has Ducks, so why not Duck-Squids (or Squid-Ducks)?
Posted by pookie at 12:00