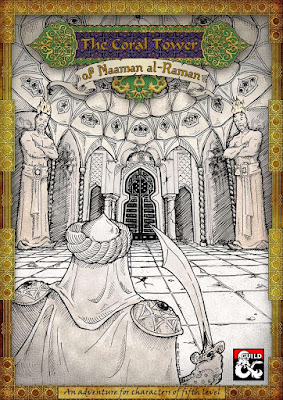 The abandoned wizard’s tower is almost as much a cliché for Dungeons & Dragons as the dungeon below ground is, but the joy of coming to an abandoned wizard’s tower (or indeed, a dungeon) in Dungeons & Dragons is seeing what the author has done with it to make it is own, to make it stand out, and to make it different. The Coral Tower of Naaman al-Raman is an adventure designed for Player Characters of Fifth Level by Louis Counter for use with Dungeons & Dragons, Fifth Edition which involves an abandoned wizard’s tower. It scores points for originality by not being just another run-of-the-mill abandoned wizard’s tower ready to be dropped into the cod-medieval setting of the Dungeon Master’s choice, but by being set in Zakhara, the Land of Fate, from TSR, Inc.’s setting inspired by One Thousand and One Nights and the Hollywood cinema which drew from it, as detailed in Al-Qadim: Arabian Adventures and Al-Qadim: Land of Fate. This places it to the southeast of Faerûn, the Forgotten Realms, with the Coral Tower of the title being specifically in the foothills of the Furrowed Mountains southwest of the village of Talv, some days travel to the southeast of Muluk, ‘The City Of Kings’. Of course, the scenario can be moved elsewhere in Al-Qadim, and even elsewhere bearing in mind that the scenario involves Djinn, Efreet, Dao, and Marid—as well as their rivalries, relationships, and politics, which firmly place the scenario in Al-Qadim, or at least settings with similar Arabic elements.

The Coral Tower of Naaman al-Raman of course stands alone. Its lower floors have been occupied by an evil shepherd and his guard ‘dogs’ and both they and one or two middle floors have suffered from being exposed to the elements. The lower floors because the shepherd and his guard ‘dogs’ do not care and the middle floors appear to have suffered some kind of explosion. Could that have been the cause of Naaman al-Raman’s disappearance? The explosion has also caused a break in the tower—which is still standing despite the break—and this likely to initially impede the Player Characters’ progress until they can find a way up. Fortunately, the means is provided for them to bridge the gap. It is worth the effort, for this is where the tower gets interesting and more detailed. There is a strong sense of the elements and the elemental races native to Al-Qadim to the descriptions given of various rooms and locations, with paintings which appear to give off the natural light of the elemental regions they depict. It has a slightly weird, almost ethereal feel to it in one or two of the rooms, and whilst there are monsters, the Player Characters will find themselves being faced with puzzles just as much fights. There is also plenty of treasure to be had, though none of it comes in the form of coins and indeed, very little of it in the form of traditional magical items. That may be disappointing to some players and their characters. It would have been nice if a few more the books to be found within the tower had been given titles.

Ultimately, The Coral Tower of Naaman al-Raman is lacking a climax. Not necessarily a final boss battle, but at least the option for the Dungeon Master to stage one. With a Marid and a Dao both wanting The Liquid Heart, a standoff between the two seems like a great way to end the Player Characters’ explorations. Plus, The Liquid Heart is also underwhelming in the sense that it is at best a MacGuffin—but it could have been more, perhaps with its own power and then the opportunity for the  Player Characters to wield some of that power (or even The Liquid Heart to wield one of them!).

Physically, the layout for The Coral Tower of Naaman al-Raman is basic, but tidily presented. It does need an edit and behind its decent cover, the scenario is unillustrated. Instead, it is left up to the floor plans of the tower to break up the text. These are drawn by the ever-dependable Dyson Logos and so are good as you would expect. However, the floor plans for his ‘shattered wizard tower’ are released under a free, royalty-free, commercial licence which does mean that they are not original and they will be used elsewhere (such as ‘The Tower of Jayúritlal’ in The Excellent Travelling Volume Issue No. 11). There is thus, a certain familiarity to them, a chance—a slim one, but a chance that they might be recognised. However, what is interesting about their use here and elsewhere, is just like the very nature of the abandoned wizard’s tower, seeing how another author approaches them and details them.

Where The Coral Tower of Naaman al-Raman really works is its use of themes and setting, the elements and the elemental races native to Al-Qadim, to detail the various rooms and locations of the Coral Tower. It enforces that setting as does the author’s tying in of Dao and Marid rivalries, relationships, and politics, and suggested link to the the Ruined Kingdoms campaign. It suffers though in terms of Player Character motivations and potential storytelling elements, but a good Dungeon Master can address those. Overall, The Coral Tower of Naaman al-Raman is a thematically enjoyable take upon the traditional abandoned wizard’s tower that needs a little more development in places.