[Fanzine Focus XXII] The Undercroft No. 12 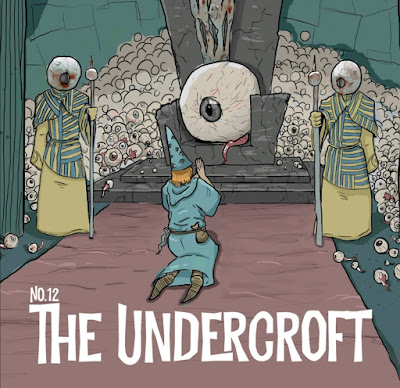 After a four-year gap between the publication of The Undercroft No. 10 and The Undercroft No. 11 in August, 2020, it was something of a surprise to see the publication of The Undercroft No. 12 the following October. Although previous issues provided support for Lamentations of the Flame Princess Weird Fantasy Roleplay, the new issue continues the move by the fanzine away from that retroclone towards a neutral position with regard to any one retroclone, such that its contents can be used with Old School Renaissance fantasy roleplaying game. Unlike the previous issue, The Undercroft No. 12 does not include any content for use with Dungeons & Dragons, Fifth Edition. It does though, include four articles which are interesting and easy to adapt to the setting or retroclone of your choice.
The Undercroft No. 12 opens with ‘The Mountain That is a Man and Also God’ by Chance Philips. This really stands out in being in verse form, a format rarely employed in gaming. It describes a mountain that is between slumber and death, worked over and within by machine men, copper-wire brained and regimented into a strict hierarchy, who send out agents to walk among normal mortals, dressed in Halfling skin and hefty wigs, claiming to be Dwarves. It is a weird, ultimately creepy piece of verse, suggesting that all Dwarves might not be what they seem or at least, some of them, from this one single living mountain, are not what they seem.
Luke Le Moignan’s ‘The Legacy of Vazimak the Thanaturge’ introduces a new type of spellbook—the ‘Mnemocrypt’. This is a device or artefact which predates the use of spellbooks, an externalised memory palace which encodes and encrypts spells in a highly personalised fashion and dates from an ancient age of powerful arcane warlords. The Mnemocrypt of Vazimak the Thanaturge takes the form of a finely etched black sphere which can be studied. As the student learns more and more of its secrets, it increasingly becomes a burden and his mind becomes paranoid and he comes to see patterns in everything. The spells that the Mnemocrypt of Vazimak the Thanaturge grants all of a necromantic nature, such as Dreadful Osseous Vitality which animates and awakens the skeletons of the living, forcing the target to make a Consitution check lest his skeleton tear itself free and Bone Grenado which makes a nearby skeleton explode and potentially other skeletons explode in a chain reaction. Some nine spells are included along with notes on the Mnemocrypt of Vazimak the Thanaturge and others. The spells are all enjoyably inventive and nasty, especially for a villainous necromancer, and so could easily be added to his spellbook even if the Dungeon Master is not using Mnemocrypts. However, they are a clever idea in themselves, adding elements of longevity and research to an artefact. Hopefully, there will be more of them detailed in future issues of The Undercroft, or even more collected in a supplement from the publisher.
Daniel Sell’s ‘Dwarfen Trinkets and Artifacts’ is a table of one hundred items that might be found in a Dwarven home or purchased from a deal in such things. They include a lock of your mother’s beard, a Dwarven novel, a nest of copper and steel wires that is in fact a Dwarven map of the region, a bar of extra strong hair wax, and more. It is all rather mundane and intentionally so. These are a hundred mundane and ordinary items, diverse and engaging in nature, good for adding colour to a campaign with Dwarves, but at the same time, it does feel like filler—a bit.
‘Gallowsport’ by Sándor Gebei describes a dark and unforgiving harbour area beset by poverty, squalor, and organised crime, but contrasted by oddities that have come from abroad. Beginning with the features—sights, sounds, smells, buildings, and activity day and night—of the neighbourhood, it is detailed in table and bullet point fashions. There are tables for ‘Curios From Dark Seas and Distant Shores’, ‘Encounters’, ‘Rumours’, and more, as well as thumbnail descriptions of various landmarks and interesting places. So a curio might be a stiletto used in thirteen successful royal assassinations, an encounter with two beggars brawling whilst sailors look on and place bets, a rumour that a nearby abandoned lighthouse holds cursed treasure protected by giant crabs, and a ship in port might be the Venus, an infamous pleasure boat decorated in bawdy style. Together, the format and the fact that it is systems-neutral, make ‘Gallowsport’ very easy to use. A Dungeon Master can easily take this as is and drop it into the port city or town of his choice, using the roleplaying system of his choice.
The Undercroft No. 12 needs an edit in place, but is otherwise neat and tidy, and enjoyably illustrated. The cover, wraparound in full colour, is weird and creepy, full of eyes and eye-people as a thief looks on.
The Undercroft No. 12 feels slighter because of the long list of gewgaws and knickknacks to be found in the centre of its pages. This is not to say that this list is not useful, but it is not necessarily as interesting or as immediately useful alongside the rest of the issue. The other entries in the issue are more engaging and will likely support play in a long term. Overall, The Undercroft No. 12 is a solid, serviceable issue.
The return of The Undercroft No. 11 is certainly welcome, and despite the shift to support for Dungeons & Dragons, Fifth Edition for some of its content, it still presents oddities and weirdness just as the previous issues did. Thus Dungeon Masters can use the oddities and weirdness just as much as Referees can for the Retroclone of their choice.
Posted by pookie at 12:00