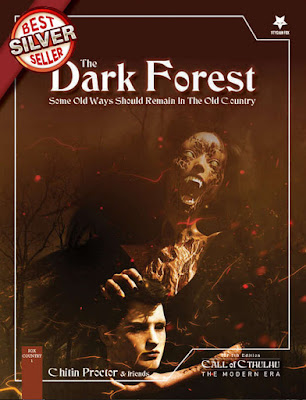 The Dark Forest – A Call of Cthulhu Scenario Set in the Modern Day is a scenario for Call of Cthulhu, Seventh Edition. Published by Stygian Fox Publishing, it is the second release from the publisher as part of its Patreon programme. The scenario is a missing persons case—that of a child at a detention and rehabilitation centre for youth offenders—which takes the Investigators to Michigan state’s Upper Peninsula and deep into the Hiawatha National Forest where they will confront ancient gods and the pernicious influence of the Mythos, all hiding behind a façade of corporate greed and child rehabilitation. The set-up of the scenario means that The Dark Forest could easily be run using Delta Green: The Roleplaying Game as it can Call of Cthulhu, Seventh Edition, although it introduces an agency of its own, The Advocacy, an independent consultancy which takes U.S. government contracts and investigates unusual events. However, the scenario does carry a ‘Contains Explicit Content’ warning and the advice that some players might find its mature themes disturbing, dealing as it does with rape, molestation, and institutional violence against defenceless teenagers.

The Dark Forest – A Call of Cthulhu Scenario Set in the Modern Day begins with the Investigators being contacted by Martina Love. Her son, Donte, is nearing the end of his sentence at the P.J. Nelson Training School for Boys in Michigan state’s Upper Peninsula, but she has not heard anything from him, the staff say that he is at an external facility, and she is becoming increasingly worried. She asks the Investigators to find her son for her, but when the Investigators begin to make enquiries, they quickly learn that the youth correctional facility is currently in lockdown because several of the boys have absconded. All this and more will need to be determined before the Investigators arrive in northern Michigan, where the mobile phone network is unpredictable and connection to the Internet even worse. Beyond this however, there is relatively little to be learned through the research methods traditional to Lovecraftian investigative roleplay and consequently, the scenario has just the single handout. An alternative set-up for The Dark Forest is to have the Investigators be teachers at the P.J. Nelson Training School for Boys. This is a stronger set-up if the Keeper wants to run the scenario as a one-shot, but does require the Keeper to prepare and present a lot of information that the teachers would know upfront because they work at the facility, rather than delivering them piece by piece as Investigators coming from the outside conduct their enquiries.

Once the Investigators get to Hiawatha Township and the P.J. Nelson Training School for Boys, the investigation takes place in three stages—interviews at the prison, at the prison’s work camps where the boys undergo vocational training for life beyond their sentence, and with the prison’s de facto warden, Bill Nelson. The Investigators are likely discover that the staff and inmates have grown used to the oddities of life in and around the Hiawatha National Forest, and are not necessarily hiding anything sinister, but simply corrupt. (Well, the scenario is set in a privatised prison system after all.) A radically transformative and horrid encounter with one of the missing boys definitely points to the former though, that is, if the Investigators survive the encounter, as it comes at a moment when they are unaware of what is to come and thus unprepared. The scenario does not deal with the fallout from this, but it will point towards something going on deep in the forest.

Initially, there is an ethereal feel to the Investigators’ incursions into the forest, but as their search for answers continues and takes them in deeper and deeper, the feel becomes darker and darker, as well as literally as the foliage and canopy thickens, and the light fades… Ultimately, the Investigators will confront the evil at the heart of the scenario, a confrontation which will take them into the Finnish equivalent of the ‘Upside Down’. The change from the here to the ‘Upside Down’ is nicely handled, but the confrontation itself, although climatic, is one note—a fight. No other means of defeating the threat are suggested and the likelihood is that the antagonist will defeat the Investigators unless they are forewarned and thus well-armed. Unfortunately, that is not necessarily likely since Investigators do not have the opportunity to learn very much about what it is that they are facing, and less so if the Investigators are teachers at the P.J. Nelson Training School for Boys. The advice is that the Keeper should allow the Investigators to retreat and make a plan, before coming back to face the threat. Notably, at the end of the scenario, there is a Sanity reward for retreating from the threat, which is only slightly less than for defeating it.

Physically, The Dark Forest – A Call of Cthulhu Scenario Set in the Modern Day needs an editor.

Yet in other ways, The Dark Forest is a superbly presented book. It is done in quite a rich palette of earthy colours and the artwork is, for the most part, excellent. Besides the absence of editing, the book could have been better organised in places, but that is something that the Keeper can easily adjust to.

As interesting as The Dark Forest is in reinterpreting the forces and influence of the Mythos through another mythology and pantheon, that of Finnish myths of the Kalevala, the execution is ultimately underwhelming. The Investigators are never quite able to prepare for, or understand, what they will face in the Finnish equivalent of the ‘Upside Down’, and the singular solution of violence is disappointing. The Dark Forest – A Call of Cthulhu Scenario Set in the Modern Day starts strong with an intriguing mystery and its presentation of mature themes is well-handled and there are some creepy scenes, but its dénouement leaves much to be desired.