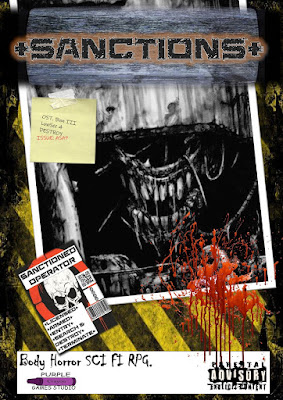 The year is 2086. In 2012, The Terminal War, a last-chance attempt by Western governments to take control of dwindling petroleum resources, triggered the use of biological and chemical weapons, as well as a limited nuclear exchange, accelerated rapid Climate Change and forced mass migration of refugees. As governments—national and local—reeled from the fallout of the war, corporations stepped in to first to aid, and then buy them out. Walls were erected around towns and cities to protect citizens from the roiling toxic fogs which cover the countryside, the mutated creatures which lurk out in the fogs, and to prevent further refugees from flooding the limited space behind the walls. Many would also combine to form larger complexes or plexes. Within the walls, these plexes were divided into security zones, from the demilitarised No-Go zone kept an eye on by police and sentry monitor guns to the wealth and protected privilege of HiSec. In between though, are LowSec and MidSec, where the police do not operate and gangs and crimes are rife. Here law enforcement has been privatised. Which is where the SANCTIONS come in.

As crime and death increase, staffing agencies are given legal powers and ‘Sanctioned’ to hire armed Temporary Employees and assign them tasks ranging from policing and search and rescue to espionage and investigation. Such employees are known as SANCTIONS and out of the money they are paid for fulfilling their assignments and bonuses for capturing or executing Officially Sanctioned targets such as ghouls or mutants, skags or gang members, biters or CHUDs (Cannibalistic Humanoid Underground Dwellers), they are expected to maintain their arms and equipment. This includes guns, armour, and bioware, or Amps, such as Coagulon Skin Coating, Porcupine Spine Ejection System, and Smog Plug nasal filters. For this is a future where bioware is used to augment men and women, cybernetics and A.I. having been outlawed following the ‘Berlin Massacre’ of 2025 when A.I. Cybertroopers ran amok due to a rogue computer virus. Bio Technology Drones are common and via biotech computer flesh pods plugged directly into the user’s nervous system grant access to the GNW or ‘Global Neuro Web’, where they can explore virtual environments, often to play, but in the case of SANCTIONS and criminals, to ferret out secrets and steal data data.

This is the set up for ++SANCTIONS++ Body Horror Sci-Fi RPG, a roleplaying game which is part Judge Dredd meets Existenz meets Bladerunner meets S.L.A. Industries meets Split Second meets Strontium Dog. Published by Purple Crayon Games Studio, it employs the publisher’s own Core-6 rules. It casts the Player Characters as these law enforcement temps, or SANCTIONS, each either a Shok agent—standard operatives skilled in combat, but who can specialise as scouts, investigators, hostage negotiators, and so on; Med Teks, typically medics and forensics specialists; and Tekks, who can be security specialists, hackers, mechanics, and the like. A SANCTION has five statistics—Fight, Ability (agility and dexterity), Mind, Social, and Physical, each of which ranges between one and four. A SANCTION also has Life Points or Hit Points, based on Physical and modified by Amps; Humanity, equal to 100%, but depleted by each Amp installed until there is a chance that a SANCTION might suffer BioPsychosis and go feral; and Luck, used to purchase extra success for any action or skill attempt.

To create a SANCTION, a player assigns eight points to his character’s Abilities, again ranging between one and four. Dice are rolled for Life Points, the player selects one positive and one negative trait for his SANCTION’S psyche profile, for example, Rich Kid Adventurer and Addict, and then has ten points with which to purchase skills and Talents. Each positive and negative trait grants an advantage or disadvantage. For example, Rich Kid Adventurer gives a SANCTION more starting funds, whilst Wanted means that the SANCTION has a bounty on his head. However, it is not clear what is necessarily a skill and what is a talent in ++SANCTIONS++, plus there are a lot of them. In fact, there are ninety-five skills and talents listed. Skills and talents are either rated at Skilled or Expert, though that is not quite clear what it means. It possibly means that a SANCTION has either one die if Skilled or two dice if Expert in a skill or talent. Since a Skilled rating costs two skill points and an Expert skill three points, a SANCTION will typically start play with just five skills, all of them probably related to one of the standard three roles as a SANCTION—Shok, Med Tek, or Tekk—because obviously a Player Character has to qualify at least in some of those skills to beSANCTION. Consequently, a Sanction does feel underskilled and the ninety-five skills in ++SANCTIONS++ just a bit much… Lastly, a player has some money with which to purchase guns and gear for his SANCTION, including bioware and amps. For the most part, this will be relatively basic equipment and amps, the really interesting ones, including fusion-powered bio armour suits being expensive.

Our sample character is Bev-MED, ex-skag, who saw one too many fellow gang members die in the south BirmChester Plex, and decided she had had enough. She stole some creds, got cleaned up and trained as a medic. She works as SANCTION to help people if she can.

Mechanically, ++SANCTIONS++ uses the publisher’s ‘Core-6’ system. This is a dice pool system using six-sided dice. Typically, for a SANCTION to succeed at a task, his player rolls a number of dice equal to a statistic plus skill. Each five or six rolled, counts as a success. One success is needed to succeed at an Easy Task, two at a Moderate Task, three for a Tricky Test, and so on. Rolls of two or more ones count as an Epic fail, whilst rolls of two or more sixes count as a Heroic success. This applies whether the Task is a Fear Task in a scary situation, overcoming stress due to the loss of Humanity, or driving a vehicle in a fast chase. Should a SANCTION fail, then a player can spend a point of Luck to turn one die result into a success.

Combat uses the same mechanics, but primarily consists of opposed dice rolls. Thus, Fight plus an appropriate skill, the highest roll determining the winner. Both damage and any armour are rolled for, the latter reducing the amount of damage the target suffers and the amount that the armour protects by one. For the most part, damage is rolled on either one or two six-sided dice, plus modifiers, whether from weapons or C.H.U.D.s, so combat is moderately deadly. Mechanically, hacking and running the Global Neuro Web in ++SANCTIONS++ essentially employs the same rules as for combat, whilst narratively they are run as virtual reality encounters, essentially enabling Control to run as encounters in alternative genres.

For the most part, ++SANCTIONS++ includes a lot of lists. Lists of guns, amps, bioware, bio computers and custom rigs, agencies and corporations, pills and drugs, phobias, and more. In terms of background, it sketches out the future in broad strokes, never getting down to specifics more than naming the town of Northampton in the colour fiction. This is intentional since the roleplaying game is designed to be flexible in that it can be set anywhere of the Control’s choosing. It does however, provide various ‘Officially Sanctioned Targets’, from A.I.s and Bions or artificially intelligent drones to gatas (sewer alligators) and muties. It also includes several hooks for Gigs—or short assignments, an actual playable Gig, and a much longer assignment also playable. Both are enough to run and play and for a group to get a feel for how ++SANCTIONS++ runs and plays.

Lastly, there is some advice for Control. Mostly, this explores the role of body horror in the ++SANCTIONS++. It is present in the setting, certainly in the case of the monsters and the ‘Officially Sanctioned Targets’ that the SANCTIONS are tasked with dealing with. However, it is not quite as present within the Player Characters, mainly because the primary vector for body horror is amps and other bioware, and to really reduce a SANCTION’S Humanity, it requires quite a fair number of pieces of bioware—and that is expensive. Further, it is slightly offset by the other side of the Humanity mechanics which restores a SANCTION’S Humanity by a few percentage points for doing good deeds.

Physically, ++SANCTIONS++ Body Horror Sci-Fi RPG needs both an editor and a developer. Although the black and white digest-size book is liberally illustrated with a range of photographs, line art, and cartoons, the layout is scrappy, even disjointed, and it has no index.
There is no denying that ++SANCTIONS++ is rough around the edges, and in need of further development, but the combination of simple mechanics and the fact that it displays its influences like a retina overlay across your sight, makes it more accessible than it might otherwise have been. The broad strokes in which its post-Terminal War future is painted also gives it a flexibility in terms of where and when Control sets her game, whether that is in her local plex or a big city familiar to us all. Feeling more like an ashcan than necessarily the finished artefact, ++SANCTIONS++ Body Horror Sci-Fi RPG offers a biopunk body-horror future that the Control can tinker with and turn into something of her own.
Posted by pookie at 12:00