Whimsy and Wonder, and Yet? 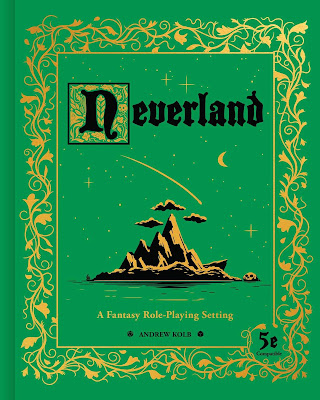 Neverland is that faraway land where Peter Pan and the Lost Boys frolic and play, fairies gather in revelries, Captain James Hook connives and seeks vengeance against Peter Pan for cutting off his hand, the mermaids croon and scheme—and of course, children never grow up. As told in J.M. Barrie’s Peter Pan; or, the Boy Who Wouldn’t Grow Up, it is also the island and land to which Peter Pan brought the Darling children—Wendy, John, and Michael—to be the family that he never had. It is a story of growing up and accepting the responsibilities of becoming an adult, and putting childish things behind you, that is, part from Peter Pan himself. In the process, they lose the way to Neverland. In other tellings of the tale, Peter Pan becomes a story about what is lost—which of course, is childhood—and then reclaiming it. Yet what if the adults could find their way to Neverland, three adults in particular, and grow old? What if Wendy, John, and Michael Darling found their back to Neverland? What would they become? Would their presence change the island? Would Peter Pan notice? These are some of the themes explored in Neverland: A Fantasy Role-Playing Setting, a hexcrawl designed for use with Dungeons & Dragons, Fifth Edition.

Neverland: A Fantasy Role-Playing Setting is published by Andrew McMeels Publishing—best known for publishing ZWEIHÄNDER Grim & Perilous RPG—and features a roleplaying interpretation of Neverland, richly detailed across twenty-four hexes, over one hundred monsters, creatures, and NPCs, fourteen or factions, and numerous locations. The latter includes coral caves, Gnome hamlets, the Home Underground where Peter Pan and his Lost Boys have made their hideout, an inverted home to a lich, an amphitheatre dedicated to mermaid performances, Captain Hook’s ship the Jolly Roger, and the very Crocodile who hunts for the rest of Captain Hook, which can actually be explored as if it was an actual dungeon!

From the outset, Neverland: A Fantasy Role-Playing Setting is very much a book for the Dungeon Master, beginning with a very clear explanation of who’s who on Neverland and the various factions on the island. They include all three of the Darlings—all grown up, Peter Pan and his Lost Boys, Captain Hook and his crew, and much more. There is a wide array of factions on the island, all of them drawn from Peter Pan; or, the Boy Who Wouldn’t Grow Up, but many of them unlikely to be unfamiliar to the players since they are more likely to be familiar with works based on the play rather than the play itself. It should be noted that in drawing from the original source, Neverland: A Fantasy Role-Playing Setting also updates one or two of them, since attitudes towards certain groups and words have changed in the century or so since the original play was performed.

Rules also cover travelling and exploring across the island—including, if the Player Characters can get sufficient fairy dust, the ability to fly, and using the Mermaids’ secret whirlpools and the Lost Boys’ hollow trees, the island’s daily cycle and movement of the Crocodile. Fun and recreation includes games of Hurling, Gnome Fairs, and Pirate Parties, whilst advanced rules cover chase sequences, and the dangers of harvesting from the dead—also pointing to a scarcity of resources on the island, and of harnessing the powers of a star, which can be used by non-spellcasters to cast spells appropriate to their personality. The huge Cast covers numerous monsters and creatures, as well as the various characters from Peter Pan, including the eponymous hero, the Darlings, Captain Hook and his crew, and more…

In comparison, the section devoted to the island of Neverland feels a little short, with just the one page devoted to each of its twenty-four hexes. Each page includes a larger view of the hex in question—taken from the larger isometric map of Neverland, a short description, a note of the timed events which occur twice daily, and a quintet of tables which can be used to generate encounters. These can occur every hour, and since it takes four hours—or a Clock in ‘island time’—to cross a hex, every hex can be very busy. Many of the hexes are also the locations of key places on the island, and whilst these are mentioned, they are not cross-referenced, making the flipping between the two in the book that little bit awkward. The various locations, whether a dungeon or a ship or an inverted tower or a mine, and so forth, are each given a page each, so feel a little more expansive than the pages devoted to individual hexes.

Besides various tables which provide adventure hooks, animals, fairy trades and tricks, locations, loot, Lost Boy traps, Mermaid games, objects, trinkets and trophies, and more, the book comes with ‘Tales from Neverland’, a set of eight short stories presented as extra chapters to the original Peter Pan story. They are each a very quick read, and can serve as inspiration, hooks, clues, and the like. They do add some flavour and perhaps a little context for the Dungeon Master, but nothing more. Rounding out Neverland: A Fantasy Role-Playing Setting is not only a bibliography, but also a sketchbook. This collection of sketches, finished pieces, and notes nicely charts the development of the look of the book and its art. Its inclusion undoubtedly adds to the charm of Neverland: A Fantasy Role-Playing Setting.

However, as rich and as well-presented as Neverland: A Fantasy Role-Playing Setting actually is, there is a handful questions that it does not effectively address. These include, “What do I do with this?”, “How do I get there?”, and “What do I play?”. There is some initial discussion of the book’s themes, but it is all too brief. Then, at the end of the book, the author provides six ready-to-play pre-generated Player Characters, ranging from a Big Game Hunter or Ranger and Child Pickpocket or Thief to Holy Orphan or Cleric and Stranded Pirate or Fighter. All of these are done as Humans and all have reasons for being on the island, and together the hextet feel just a very little like the adventurers from the Dungeons & Dragons cartoon in being from the ordinary world and cast into the land of dreams that is Neverland. They also suggest reasons why Player Characters might end up in Neverland, but beyond this, there is a lack of advice for Dungeon Master on what Classes and types of characters the players might play, how they might get to Neverland, and what they do when they get there. To some degree this is offset with tables of random and specific adventure ideas, plot hooks, and rumours, but whilst the author states that they are there if the Dungeon Master is stuck as to what to do next, what if the Dungeon Master is stuck at the start?

Another issue is with the monsters. Including variations, there are over one hundred of them, and whilst that gives Neverland and the Dungeon Master variety aplenty, it does feel like a lot for a twenty-four hex hexcrawl and the likelihood is that many of them the Dungeon Master may never bring into play. Now that is not necessarily a bad thing, but with that many entries in the bestiary or cast list as Neverland: A Fantasy Role-Playing Setting terms it, not all of them are given the descriptions that they deserve, forcing the Dungeon Master to rely upon their illustrations to describe them. Which is disappointing.

Physically, Neverland: A Fantasy Role-Playing Setting is a beautiful book, done in rich blocks of greys and blacks, reds and green. The layout is crisp and clean and the book itself is an easy read. The cartography is also good. However, the book could have been better organised, especially when it comes to cross referencing the locations in the text and the placement of the random tables which come in the middle of the book rather than at the end where again they might be easier to find.

Neverland: A Fantasy Role-Playing Setting is a rich and detailed setting, one which takes the whimsy and wonder of the source material, Peter Pan; or, the Boy Who Wouldn’t Grow Up, and makes it somewhere that the Player Characters can explore and perhaps discover the darker secrets of the island. It is beautifully presented, but ultimately, it needs more effort upon the part of the Dungeon Master to bring to the table and to draw her players in than perhaps it should.