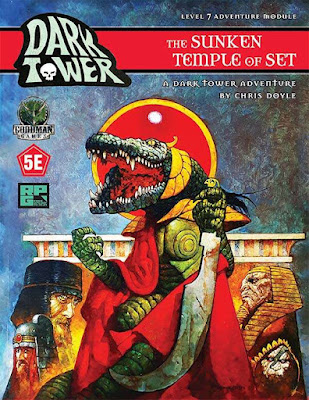 Goodman Games provided two titles to support Free RPG 2021, both of which were highly anticipated. One was Tomb of the Savage Kings, an adventure for the Dungeon Crawl Classics Role Playing Game. The other was potentially much more interesting. As its name suggests, Dark Tower: The Sunken Temple of Set is an expansion for Dark Tower, the scenario written by Jennell Jaquays and published by Judges Guild in 1979. The scenario details a dungeon built around two buried towers contested over by followers of Set and Mitra and the surrounding lands and has a strong Eastern Mediterranean and Egyptian flavour. Regarded as a classic, Dark Tower was included in ‘The 30 Greatest D&D Adventures of All Time’ at number twenty-one in the ‘Dungeon Design Panel’ in Dungeon #116 (November 2004)—notable because it was the only third-party scenario to be included on the list. In March, 2021, Goodman Games announced it had acquired Dark Tower from the Judges’ Guild, and would republish it for use with both Dungeons & Dragons, Fifth Edition and the Dungeon Crawl Classics Role Playing Game.
Dark Tower: The Sunken Temple of Set is a mini-adventure for Dungeons & Dragons, Fifth Edition which adds an extra area which can be added to the new edition of the Dark Tower scenario. This is a flooded box canyon to the east of the village of Mitra’s Fist at the far end of which stands a partially flooded, and as the Player Characters will discover, cursed temple. At first, it appears to be abandoned, but as they explore further, they are warned off, and then ultimately, will find signs of occupation. Here resides more agents of Set and their allies, each pursuing their own agenda—whether for or against the god of deserts, storms, disorder, violence, and foreigners. And that agenda may even see them giving aid to the invading Player Characters. The valley and temple complex are described in just eleven locations, but each location is highly detailed and easy to place on the nicely done map. The temple itself contains a good mix of traps, secret doors, a puzzle or two, and of course, nasty crocodilian and serpentine threats, many of which will be a challenge to defeat by the Player Characters. There is a decent amount of treasure to be found, as well as some singular magical items which do tie with the Dark Tower scenario.
Dark Tower: The Sunken Temple of Set is designed to be played by four to sixth Player Characters of Seventh and Eighth Level. In addition to the nasty reptilian threats they will encounter, the main challenge in the scenario is the environment—much of the temple is flooded. This will make fighting and exploring in those locations difficult. The scenario includes a decent background and several hooks which the Dungeon Master can use to persuade her players and their characters to investigate the valley and the temple. These work even if Dark Tower: The Sunken Temple of Set is not used as an expansion to Dark Tower, but work better if they are. In addition to detailing new weapons and magical items, the module details two new spells—Snake Charm and Ticks to Snakes.
Physically, Dark Tower: The Sunken Temple of Set is decently presented. The artwork is excellent, the cartography good, and whilst it needs a slight edit in places, the scenario is well written. Dark Tower: The Sunken Temple of Set is a good module which should challenge the Player Characters and provide everyone with a session or two’s worth of play. Dark Tower: The Sunken Temple of Set will make a fine addition to Goodman Games’ new version of Dark Tower, and is probably worth putting on hold until the two can be run together.
Posted by pookie at 12:00