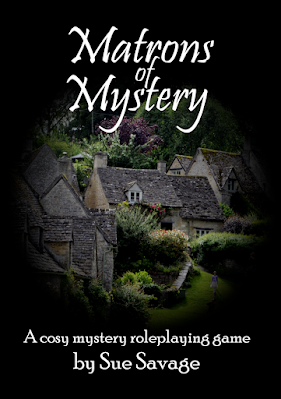 The mystery—as opposed to the mysterious, which has always been there—has long been a part of roleplaying, all the way back to The Maltese Clue, the scenario published by Judges Guild in 1979.  It really came to the fore with roleplaying games like Call of Cthulhu, Gangbusters, and Justice, Inc. and more recently seen in the GUMSHOE System with roleplaying games such as Mutant City Blues, which combines superheroes with the police procedural. What these all do with the mystery is provide the Game Matron with a plot and a set of clues that the players and their characters investigate the mystery and hopefully piece together the clues to uncover the mystery. However, what if the mystery and its investigation was set up the other way around? What if there was no set solution and instead the solution to the mystery could be constructed from the clues uncovered by the players and their characters and would be, if not absolutely correct, then very nearly so? This is what Matrons of Mystery—and Brindlewood Bay, the roleplaying game by Jason Cordova it is derived from—both do.

Both Matrons of Mystery and Brindlewood Bay are Powered by the Apocalypse roleplaying games in which players take the roles of women of a certain age who investigate murder—often much to the consternation of local law enforcement. Brindlewood Bay has an American feel and behind the series of murders a Lovecraftian conspiracy, whereas Matrons of Mystery focuses entirely on the murder mysteries, employs a parred back version of the Powered by the Apocalypse mechanics, and has a decidedly British sensibility being inspired by television series such as Miss Marple, Rosemary & Thyme, Agatha Raisin, Queens of Mystery, Father Brown, and so on. This is not the world of the hardboiled mystery, or even mystery on a medium heat, but that of the ‘cozy’ mystery, set in a small town or village where everyone knows everyone—except that recently arrived stranger, and of course, everyone’s secrets—and there is a strong sense of community, and is of course, suitable for afternoon or Sunday night viewing with all of the family gathered round the television.

Matrons of Mystery: A cozy mystery roleplaying game is designed for three or four players, plus the Game Matron, and each mystery ideally takes a session to solve. This makes it good for one shots or convention games, and the familiarity of its genre means that Matrons of Mystery will be easy to grasp and familiar to most players. In Matrons of Mystery, players take the roles of ladies of a certain age, who are perhaps single, widowed, or divorced, certainly retired or have more than enough time to throw themselves into their community and various activities and charities. For example, keeping the parish church clean, attending meetings of the W.I., helping run Meals on Wheels, doing the village Christmas Pantomime, and so on. Of course, when murder strikes—as it invariably does in their surprisingly high murder count communities—it is the ‘Matrons of Mystery’ who take up their handbags, put down their trowels, and ever ready to make a nice hot cup of tea, discover whodunnit before the local bobby on the beat, Police Constable Plodd, and Inspector Witless from the nearest big town, can work it all out.

Character generation and game set-up in Matrons of Mystery is quite quick. First, the players name and decide on some details about their Matrons’ village. Then, every Matron has a name, a Personal Style, a Hobby, a Background, an Investigation Style, and a Contact. So a Name might be Audrey or Nettie, a Personal Style could be ‘Smart and Classic’, ‘Punk’, or ‘Twinset and Pearl’, and a Hobby Baking, Gardening, Collecting, or Amateur Dramatics. The Background consists of answers to three questions—the first is about a Matron’s former partner or whether or not she was married, what was her career before she retired, and whether she has any children, or if not, young relatives she is fond of. Her Investigation Style—Physical, Logical, Intuitive, or Gregarious—represents different approaches to solving mysteries, and the Contact is someone that the Matron knows well from her past and can rely upon to help out in a pinch. To create a Matron, a player decides upon all of these factors, answers the three questions for her Background, and then assigns +2 to her primary Investigation Style, +1 to her secondary Investigation Style, sets a third at 0, and assigns -1 to her least favoured Investigation Style.

Mechanically, Matrons of Mystery uses Powered by the Apocalypse. To undertake an action or ‘Move’, a player rolls two six-sided dice, adds his Matron’s Investigative Style and aims to roll high. The results fall into the ‘Yes’, ‘Yes, but…’, and ‘No and…’ Roll ten and more and the Move is successful; roll between seven and nine, and the Move is successful, but comes with a Complication; and roll six or less, and the Move not only fails, but adds a Complication. A Complication hinders the Matron’s investigative efforts, such as her slipping and injuring herself climbing in or out of a window or the suspect taking umbrage at one or more of the questions posed to him. This can lead to an ongoing Condition, such as a sprained ankle or being thrown out of a society dinner. (If there is one issue with Matrons of Mystery, it is that it could have done with a bigger list of Complications and especially Conditions to inspire the Game Matron.)

Rules are provided for gaining Experience Points and either using them in play to improve dice rolls or saving them to improve a Matron’s Investigative Styles. They do feel optional though.

Unlike most versions of Powered by the Apocalypse, the rules in Matrons of Mystery include an Advantage and Disadvantage mechanic. Thus when a Matron has the Advantage, which can come from her Personal Style, Hobby, Background, or the situation, three six-sided dice are rolled instead of two, and the best used. Conversely, when she is at a Disadvantage, her player rolls three dice and keeps the lowest two. Another difference between other roleplaying games using Powered by the Apocalypse and Matrons of Mystery is that it does not make use of Playbooks, each of which provide an archetypal character and its associated Moves. Instead, Matrons of Mystery provides a standard set of nine Moves that all of the Matrons can use. The first five Moves—‘Investigate’, ‘Interrogate’, ‘Take Action’, ‘Lend A Hand’, and ‘Ask A Favour’ are used to gain clues and conduct the Investigation. The next three, ‘Reminisce’, ‘Nice Cup of Tea and a Sit Down’, and ‘Go To Adverts’, enforce both the genre and the format of the genre. ‘Reminisce’ enables a Matron to recall something from her past which will help with the current investigation; ‘Nice Cup of Tea and a Sit Down’ lets two or more Matrons sit down, have a nice hot cup of tea, have a chat with each other, and in doing so, each remove a single Condition; and ‘Go To Adverts’ enforces a break in the story when a Matron is in danger, ends the scene on a cliffhanger, and lets the players discuss how the cliffhanger is resolved with the imperilled Matron unharmed when the adverts end!

For the Game Matron, there is good advice on designing a mystery, from the theme and the set-up through to defining the secrets and listing the clues. There is also good advice on running the game—both online and at the gaming table, how to handle clues, secrets, Complications and Conditions, and so on, as well as optional rules for one-on-one play and playing away from the Matrons’ home village. A short bibliography provides some inspiration for the Game Matron. Then there are three ready-to-play Mysteries, complete with set-up, teaser, eight suspects, and a long list of clues. The first is ‘Gardner’s Question Crime’ in which the village hosts the popular radio show, Gardeners’ Answers in the grounds of Hatherly Hall. With most of the village present, the guest speaker, celebrity gardener and host of the television series, Gardener’s Life, Alan Jefferson, drops dead as he is about to take to the stage. This is followed by ‘Dicing With Death’ in which the village hosts a roleplaying convention (!) and award-winning game designer, Scott Sallow, is found dead on the last day of the convention with his mouth stuffed full of polyhedrals! Lastly, ‘Ding Dong Death’ is takes place just before national bell ringing championships and with the village wanting to put on a good performance, the bell ringing team is getting in some last-minute practice. Unfortunately, the lead bell ringer, Walter Bell, is found hanging upside down from one of the bell ropes. All three scenarios are great set-ups, though ‘Dicing With Death’ feels both improbable and a direct appeal to its intended audience.

Physically, Matrons of Mystery is a tidily done digest-sized book. The cover is appropriately rural, whilst the internal artwork, all publicly sourced, is there to break up the page rather than necessarily illustrate the game. The book is well written and easy to read—especially with the slightly larger fount size.

Matrons of Mystery is fun to play and it is simple to play. Having just the one set of nine Basic Moves eases play no end. Given the age of the Matrons, it is much more of a social game than physical game necessarily, although some sneaking around is probably going to be necessary and perfectly in keeping with the genre. Although it does present her with eight suspects to roleplay, the lighter nature of the rules do provide the Game Matron with the opportunity to really focus on her roleplaying and have fun with it too. The nature of the game and its ‘no given perpetrator’ set-up also strips Matrons of Mystery of any sense of stress or competition which might arise in the players and the Game Matron as they worry whether their deductions and solution to the crime is actually right. Instead, the players and their Matrons construct the murder solution and motive from the clues, thus emphasising storytelling—both the storytelling of the murder and the storytelling of it being solved.

Matrons of Mystery: A cozy mystery roleplaying game is cleverly cozy, taking the structure of Brindlewood Bay and parring it back to focus on its core game play. It is a smart, sprightly roleplaying game which delightfully evokes its genre from the page to the table. And if you are going to play this at the table, a nice hot cup of tea is an absolute necessity.