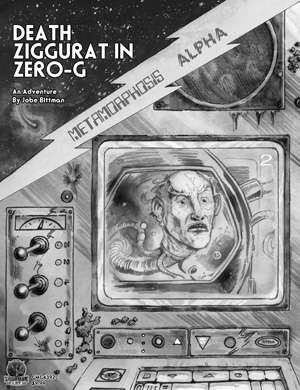 Death Ziggurat in Zero-G is a scenario for Metamorphosis Alpha: Fantastic Role-Playing Game of Science Fiction Adventures on a Lost Starship. The first Science Fiction roleplaying game and the first post-apocalypse roleplaying game, Metamorphosis Alpha is set aboard the Starship Warden, a generation spaceship which has suffered an unknown catastrophic event which killed the crew and most of the million or so colonists and left the ship irradiated and many of the survivors and the flora and fauna aboard mutated. Some three centuries later, as Humans, Mutated Humans, Mutated Animals, and Mutated Plants, the Player Characters, knowing nothing of their captive universe, would leave their village to explore strange realm around them, wielding fantastic mutant powers and discovering how to wield fantastic devices of the gods and the ancients that is technology, ultimately learn of their enclosed world. Originally published in 1976, it would go on to influence a whole genre of roleplaying games, starting with Gamma World, right down to Mutant Crawl Classics Roleplaying Game – Triumph & Technology Won by Mutants & Magic from Goodman Games. And it would be Goodman Games which brought the roleplaying game back with the stunning Metamorphosis Alpha Collector’s Edition in 2016, and support the forty-year old roleplaying game with a number of supplements, many which would be collected in the ‘Metamorphosis Alpha Treasure Chest’.

Death Ziggurat in Zero-G is designed an introductory scenario and campaign starter for players new to Metamorphosis Alpha and the Starship Warden. Ideally this is with the tribe of Mutants and Humans based at Super Shop Mart, but the scenario includes some notes on how to use it in an existing campaign. It consists of three parts. In the first, the Player Characters go about their daily lives as members of the Super Shop Mart Tribe. Sometimes standing guard duty or examining newly brought in technological artefacts of the Ancients, but at others being sent out to find food, water, or other artefacts, raid or see off a raid by another tribe, and so on. In the middle section, the Player Characters discover the remains of a cryostasis facility and a strange artefact—the detached, but preserved head of the very crotchety Professor Cardunkle. Initially, all he wants is a new body for his head—any body will do, which can result in some hilarity because of the incongruity of the head of an old man being attached to something totally ridiculous. Eventually though, he will want his own body back and knowing where it is, Professor Cardunkle both directs the Player Characters and promises great treasure. This third and last part of the scenario consists of exploring the ruins of another facility whose internal structure has more or less been turned upside, which represents a challenge in itself.

All of this, and thus, Death Ziggurat in Zero-G, takes place in a closed environment, a great dustbowl known as the Silver Waste, a desert of polished, silver dunes whipped up and scoured by daily endless sandstorms and nightly freezing temperatures, where several tribes eke out a desperate existence. There is lack of permanence to the region due to the constant sandstorms and no one knows what lies beyond the Silver Waste, though in one direction stands ‘The Great Mirror’, a gigantic, flat, reflective wall which stretches as far as the eye can see left and right, and then from the ground high into the sky. The scenario only describes the Player Characters’ Super Shop Mart base of operations and the scenario’s endpoint, the ‘Death Ziggurat’ of the title in full detail, but several other locations are also described and these, when combined with the table of missions for the Player Characters’ tribe and table of random encounters, should actually provide a playing group with several sessions’ worth of play before it moves on to the scenario’s main plot. The sandbox element of the scenario also means that the Game Master could develop and add her own plots and content if she so desired. This would add depth to the scenario as well.

The plot to the scenario is by no means new, but it is nicely dressed up and layered with its post-apocalyptic future and rough environment. It does provide the Game Master with a fun NPC to portray whilst leaving scope for to develop and portray the other NPCs in the region. There is a not a great deal of treasure or artefacts to be found in the Silver Waste, and in many cases, finding what there is involves a lot of work, but to be fair, the point of Death Ziggurat in Zero-G is not on finding goodies, but discovering its secrets and finding a way out. There is promise of powerful artefact though—no less an artefact than an entirely new colour band with the blessing of James M. Ward, designer of Metamorphosis Alpha—the incredible capabilities of which will have factions beyond the Silver Waste fighting with both each other and the Player Characters to possess!

For the Game Master, there is some staging advice on running Death Ziggurat in Zero-G, but in general, this is an easy scenario to run. Perhaps the oddest aspect of running the scenario is that to get the most out of Death Ziggurat in Zero-G, it is suggested that the Game Master be multi-lingual or even use coded speech such as Pig Latin. This is to roleplay another aspect of the scenario rather than Professor Cardunkle, and intended to confound the technologically illiterate Player Characters rather than the players. This may prove to be a challenge for the Game Master, so another option might be record some phrases, perhaps done by a computer voice, as part of her preparation. If the Game Master is multi-lingual, then she can have some further roleplaying that aspect of the scenario.

One issue with Death Ziggurat in Zero-G is that beyond the limits set by ‘The Great Mirror’ and the inclusion of the new Colour Ring, it does not necessarily feel like a scenario for Metamorphosis Alpha. This is because its inclusion of base names such as ‘Super Shop Mart’ and ‘Me Depo’ feel more grounded, better suited to a planetside apocalypse like that of Gamma World or Mutant Crawl Classics, rather then being set aboard a giant generational colony spaceship like the Starship Warden.  That said, the Player Characters of the Super Shop Mart tribe will have no idea that they are aboard a spaceship at all, so that is not necessarily an issue for them. Plus of course, the Game Master could just run Death Ziggurat in Zero-G as an Earth-bound starting scenario for Gamma World or Mutant Crawl Classics and no-one would be any the wiser.

Physically, Death Ziggurat in Zero-G is cleanly presented. The maps are nicely done as are the illustrations, and the whole layout matches that you would expect of title from Goodman Games, feeling very much as it does for Dungeon Crawl Classics or Mutant Crawl Classics.

Overall, Death Ziggurat in Zero-G is a solid starting scenario. It has plenty of scope for the Player Characters to explore a mini-apocalypse as well as its main plot, and is flexible enough place aboard the Starship Warden as intended, or else where.