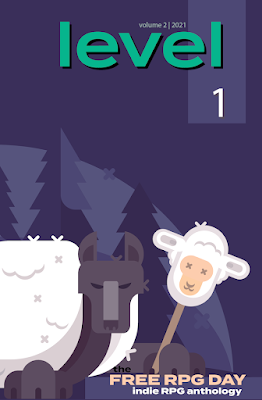 LEVEL 1 – volume 2 2021 is a slim, digest-sized book. Although it needs an edit in places, the book is well presented, and reasonably illustrated. In general, it is an easy read, and everything is easy to grasp. It should be noted that the issue carries advertising, so it does have the feel of a magazine.

As with LEVEL 1 – volume 1 2020 before it, LEVEL 1 – volume 2 2021 is the richest and deepest of the releases for Free RPG Day 2021. Not every one of the fifteen games in the anthology explores its theme of masks, but for the most part, the fifteen are interesting, even challenging, and will provide good sessions of roleplaying. The standouts are ‘Ball of the Wild’ and ‘Tiny Tusks’ as these nicely explore to issue’s theme to its best. Once again, despite the variable quality of its content, of all the releases for Free RPG Day 2021, LEVEL 1 - volume 2 2021 is the title that playing groups will come back to again and again to try something new each time.