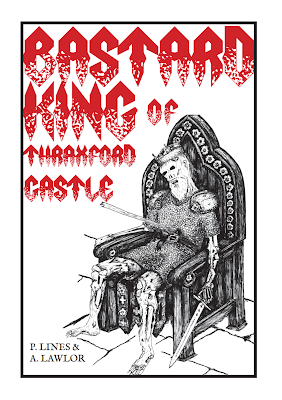 The warning is well known throughout the area. There is a curse upon Thraxford Castle and all who enter its gates. A Curse of rotting flesh, of unlife as one of the undead, for all who die within its walls must rise again at dawn to play out a danse macabre of their lives the day before. It is a Curse lain upon the soldiers and occupants of Thraxford Castle by The Bastard King’s slaughter of his kin. None can leave and all who put a foot within a thousand paces of that accursed place will fall foul of the curse… Bastard King of Thraxford Castle is a macabre, gothic mini-location inspired by both British medieval history, Hammer horror films, and even British Dungeons & Dragons adventures drawn from the pages of White Dwarf magazine back in its heyday, such as ‘The Lichway’ by Albie Fiore (White Dwarf Issue No. 9, October/November 1979). Published by Leyline Press and like The Isle of Glaslyn and The God With No Name before it, Bastard King of Thraxford Castle manages to fit an adventure onto the equivalent of four pages and then present it on a pamphlet which folds down to roughly four-by-six inches. One the one side it provides all of the details of the descriptions of the outer and inner wards, whilst on the other there is a map of the whole of the castle, plus descriptions of the actual keep.