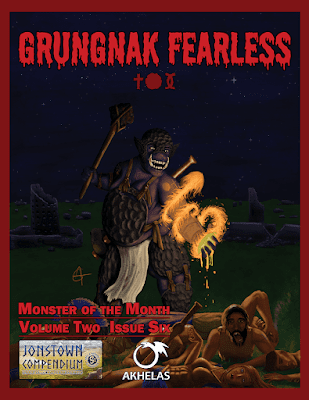 What is it?
Grungnak Fearless presents an NPC and his entourage, and trinkets for use with RuneQuest: Roleplaying in Glorantha.
It is a twenty-eight page, full colour, 1.83 MB PDF.
The layout is clean and tidy, and its illustrations good. It does need an edit in places.

Where is it set?
Grungnak Fearless is nominally set in the Big Rubble where the NPC is feuding and scheming to be the fifth ‘Great Clan’ of Trolls or Uz, in the ruins of the city in an event known as the ‘Foreign Bully Feud’. With some adjustments, it could be set elsewhere, and suggestions are included as to where and how to include this NPC in those regions.

Who do you play?
No specific character types are required to encounter Grungnak Fearless.

What do you need?
Grungnak Fearless requires RuneQuest: Roleplaying in Glorantha, the Glorantha Bestiary, and The Red Book of Magic. In addition, the RuneQuest Classic supplements, Pavis: Threshold to Danger, Big Rubble: The Deadly City, and Trollpak: Troll Facts, Secrets, and Adventures for RuneQuest will information which will be useful for using Grungnak Fearless in a Game Master’s campaign.
What do you get?
The second volume of ‘Monster of the Month’ presents not monsters in the sense of creatures and spirits and gods that was the feature of the first volume. Instead, it focuses upon Rune Masters, those who have achieved affinity with their Runes and gained great magics, mastered skills, and accrued allies—corporeal and spiritual. They are powerful, influential, and potentially important in the Hero Wars to come that herald the end of the age and beginning of another. They can be allies, they can be enemies, and whether ally or enemy, some of them can still be monsters.
The second volume comes to a close with Grungnak Fearless, a brutal Death Lord of Zorak Zoran, the God of Hate and Vengeance. From her beginnings as a bandit, she has arisen to be a true monster, reveling in murder and mayhem, selfishly pursuing the novel and the new as she schemes, but mostly bludgeons her way to the top. Having amassed a number of followers in her leaden grasp, she is hellbent on taking out her rivals—using any means necessary, but ultimately and preferably at the end of her great hammer, and then eating them. Both as revenge and to see what they taste like. Multiple suggestions are included on how to use Grungnak Fearless. This is as an ally or an enemy and includes a pair of scenarios, one for each option. Both scenario outlines are well written and will help the Game Master develop them further for her campaign.
Grungnak Fearless is herself given full stats and a write-up, including her powerful bound spirits, one of which is a fire elemental! Her darkness elemental is nasty enough, but her command of a fire elemental gives her an edge that is utterly hostile to the outlook of other Trolls. A nice touch is that this is not instant, but takes time and Grungnak Fearless’ Trolkin must carry the wood and kindling to set a bonfire of sufficient size ablaze to summon the fire elemental. She also possesses Stolen Fire, a Zorak Zorani cult artefact which is won by defeating a Rune Master of a Fire/Sky cult in a heroquest, and then drinking his blood. Stolen Fire grants great gifts for any Troll who bears it.
Grungnak Fearless’ entourage is also fully detailed. This includes her ‘lover’, Bazzik Fineteeth, a Rune Priest of Argan Argar known for the unfaceted jewels embedded in his teeth; the mantis-obsessed Fenhield Mantis-Friend; and Waggul, Fenhield Mantis-Friend’s favouritist Mantis—because he is soooo cute. Stats are also provided for the general Zorak Zorani Warriors and Trollkin Slingers in the would be ‘Great Clan’. As with the other entries in the ‘Monster of the Month’, full stat sheets are provided for all of the NPCs in Grungnak Fearless.
Lastly, Grungnak Fearless details a short-form Rune cult of Gorakiki the Insect Mother in her aspect as Gorakiki-mantis, the subcult worshipped by the Kugurz Clan in the Big Rubble. For use by NPCs or Player Characters, this expands upon the Gorakiki cult with guidelines as to how intelligent manitises can initiate, what is expected of initiates, cult skills, Spirit and Rune magic, associated cults, and a pair of new Rune spells. These are Foreclaws and Transform Head (Mantis), and are as nasty as you would expect, in line with similar transformation Rune spells.
Is it worth your time?
Yes—Grungnak Fearless presents a monster of an enemy to face the Player Characters, or a particularly challenging ally to keep on side, especially if the Game Master is running a campaign set in Pavis and the Big Rubble.
No—Grungnak Fearless presents a potentially interesting ally or enemy, plus supporting cast, should the Game Master want to include a monster of an enemy to face the Player Characters. However, if the Game Master’s campaign does not involve Trolls or is set in the Big Rubble, and she does not want to adjust the content, it is of relatively little use.
Maybe—Grungnak Fearless presents a monster of an enemy to face the Player Characters, or a particularly challenging ally to keep on side, but the Game Master may simply not want to involve the Trolls in her campaign, take her campaign to the Big Rubble, or necessarily make the adjustments to brings it content into her campaign.
Posted by pookie at 18:00