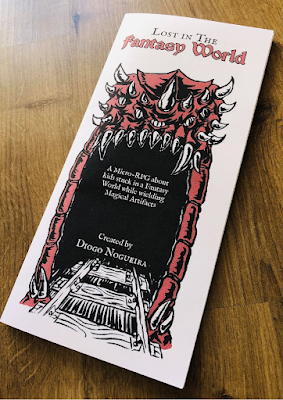 Lost in the Fantasy World is a roleplaying game in which a group of children is magically transported to a fantasy world complete with magic and monsters. Once there, they are each given an amazing artefact by a mysterious Mentor, which enables them to come to the plight of the peoples—and they have many plights—and so become heroes. Yet, they still want to return, and ultimately, will have to choose between going home and the powers that the artefacts grant them. How the children get to the fantasy world—going on a strange ride in an amusement park, being sucked into a weird old book, going through a very small door in a scary abandoned house—suggests the inspirations behind Lost in the Fantasy World. Narnia, perhaps? The Dungeons & Dragons Animated Series? Well, definitely the latter, and that definitely comes down to nationality.

A Player Character in Lost in the Fantasy World is simply defined. He has a name, concept, four traits, and an Artefact. The concept, such as ‘Brendan, the quiet D&D geek’ or ‘Emily, the bolshy cheerleader’, defines the Player Character, whilst traits can include a quality like ‘Athletic’ or ‘Good with his Hands’; an object such as notebook and pen, a football, or a torch; a companion like a pet rat or a baby unicorn; some training or knowledge, foe example, ‘Read up on all the myths’ or ‘Works in my dad’s garage’; or a relationship with another character, such as ‘David is my best friend’ or ‘I always have to keep an eye for Andrea’. At the beginning of the game each Player Character will receive an artefact and have some idea of what it can do from its name, but not exactly what. What, exactly, it can do, will be developed during play. For example, the Torch of Unending Light, the Pipes of Piercing, or the Buckler of Shielding.

Tristian the inquisitive musician
Fine singing voice (Trait), I must protect my sister, Monica (Trait), helps his grandmother with the garden (Trait), Catapult (Trait)
Artefact: Lyre of the Living

Mechanically, Lost in the Fantasy World is direct and simple. When the outcome of a situation is uncertain, both the player and the Mentor—as the Game Master is known—make a Resolution Roll. This is the roll of a six-sided die each to which the player can add a +1 Modifier for any pertinent Trait, the Expenditure of an Adversity Token, a great description of his character’s actions given by the player, as well as the situation itself, the later mostly provided by the Mentor. Whomever rolls highest, narrates the outcome of the situation or scene.

If the player’s roll is lower, then he earns an Adversity Token, which can later be used to gain a Modifier. A player can also Push the roll, which allows him to make the Resolution Roll a second time, but if it is failed, the Player Character temporarily loses a Trait. Use of a magical Artefact enables the player to make the Resolution Roll with two dice—or even three dice if used in a creative and exciting fashion—and the highest result used. Combat uses the same mechanics, the winner of the Resolution Roll narrating the outcome and the loser temporarily losing the use of a Traits. A lost Trait can be recovered in time, but a Player Character or a monster or NPC is ‘Taken Out’ if they lose all of their Traits. They are not dead, but cannot act decisively and are at the mercy of other Player Characters or even their opponents.

For the Mentor there are several suggested opponents and obstacles complete with Traits which she can bring into play and there is also some advice on running Lost in the Fantasy World. The role of the Mentor is actually twofold. First, she serves as the Referee, and second, she actually roleplays the Mentor as character in the game world, who guides the Player Characters to some extent, mysteriously presenting them with both opportunities for adventure and rumours and hints as to the way back to the Player Characters’ home world. Ideally, there should be a balance between the two, a pull and a push, the push to undertake more adventures and help others becoming stronger as the players narrate new and more interesting capabilities for their Artefacts. However, Lost in the Fantasy World does not fully support that notion. There is no mechanical means provided to model the balance between the Player Characters’ supposed desire to help and their desire to get home. Perhaps some kind of countdown or count-up which a player can roll against to determine which of the two desires that his character follows, such that ultimately the pull towards one or the other becomes too much.

Physically, Lost in the Fantasy World comes as a simple pamphlet which folds out to just a single sheet of paper. It is nicely, simply presented and the artwork has a certain charm, but the pamphlet does need another edit for all of its brevity.

Lost in the Fantasy World is a clever little concept which draws upon something often ill-regarded by Dungeons & Dragons fans and develops it into a simple narrative, storytelling game. It is easy to learn and quick to play, but ultimately does not quite follow through on its concept when there was very much room and scope to do so. Hopefully, Lost in the Fantasy World, Second Edition will do that.