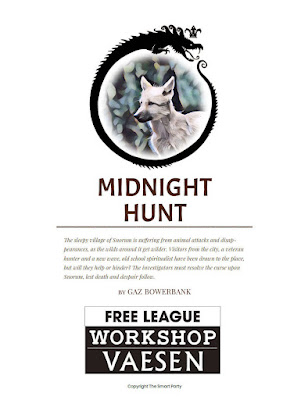 For fans of Vaesen – Nordic Horror Roleplaying, the roleplaying game of investigative folklore horror set in nineteenth century Scandinavia, based on Vaesen: Spirits and Monsters of Scandinavian Folklore as collected and illustrated by Johan Egerkrans, there is just the one supplement supporting it—for the moment. However, for Vaesen and other titles from Free League Publishing, there is the Free League Workshop. Much like the DM’s Guild for Dungeons & Dragons, this is a platform for creators to publish and distribute their own original content, which means that they also have a space to showcase their creativity and their inventiveness, to do something different, but ultimately provide something which the Game Master can bring to the table and engage her players with. Such is the case with Midnight Hunt.

Midnight Hunt is written by one half of the hosts of the podcast, What Would Smart Party Do?—the other half designed King of Dungeons and presents an engaging and entertaining mystery with a dilemma or two. It could easily be played in a single session, perhaps two at most, and would make a good option for a convention scenario just as it would for the Game Master’s own campaign. It is the author’s second scenario for Vaesen after Unbearable.

In Vasen, the Player Characters are members of the Society, which is based in Castle Gyllencreutz in the city of Upsala and which is dedicated to the study and understanding of the vaesen. Thus its members look for opportunities to investigate signs of Vaesen activity, but in Midnight Hunt, that sign comes to the Player Characters in the form of a message delivered by carrier pigeon. It comes from Ingvar Kransvik, the village elder of Snorum, who is concerned that members of a local family as well as the village priest have gone missing, as the beasts in the nearby forest are acting oddly, and the other villagers are thinking turning back to the Old Ways, the faiths their ancestors followed before Christianity was adopted.

Midnight Hunt is—like Unbearable before it—a classic ‘village in peril’ scenario, one which again involves bears, but unlike Unbearable, there is less of the cliché to it. Snorum is a quiet place (which leaves you wonder if the name itself is meant to be a sleepy joke), its inhabitants mostly friendly, if a little wary, and for the most part, co-operative. The place appears to be mouldering, even rotting in places, and there is a sense of impending degeneration to this settlement in eastern Sweden. This is present not just in the buildings, but also in a number of NPCs, most notably Ingvar Kransvik. The Player Characters’ efforts are hampered by the presence of the also elderly Algot Lindberg, a renowned hunter determined to take as trophies from the supernatural creatures he believes to be the cause of the problems in the village. Since their enquiries are likely to cross over, Algot Lindberg will seem to be hunting the Investigators as much as he is the Vaesen. The Investigators must also contend with Birgitta Blomqvist, a recently arrived spiritualist who is holding ceremonies dedicated to the Old Ways and tempting many of the villagers to attend.

The scenario details just seven locations, complete with clues and challenges. The former are all open to interpretation and there is no one real solution. This is played out against not one, but three countdowns and potential catastrophes. These are nicely detailed, as are the three potential confrontations. There are several parts of a puzzle that the Game Master will need to seed the scenario with, which can be done as part of her preparation or placed as necessary through play.

Ultimately, the Player Characters will have a showdown with the supernatural cause of the problems and deaths in Snorum, hopefully with their having acquired clues and puzzle pieces sufficient to deal with the Vaesen, as well as the more human issues. Various solutions are offered and discussed with combat not necessarily being the obvious one. There is plenty of investigation to be done in the early part of the scenario, but there are opportunities to use other skills as well.

Physically, Midnight Hunt is decently presented. The artwork, which includes some nicely done thumbnail portraits of the NPCs, is decent and the maps clear and simple. It would have been useful though, if the map of the village had been included in the main body of the scenario along with the other maps. The scenario is not as well written as it could be, and a much stronger and much needed edit could have solved that issue.

Midnight Hunt is a nicely presented,  accessible, and self-contained scenario with a decent nature versus man plot and plenty of NPCs to interact with and clues to find. It is also easy to move to another location—though that location should have bears!—and easy to add to an ongoing campaign. The latter is probably easier than running it as a one-shot as it does feel busy in places. Overall, Midnight Hunt is a solid scenario for Vaesen which delivers some potentially savage horror in a moldering bucolic backwater.