Friday Fantasy: Love in the Age of Gongfarmers 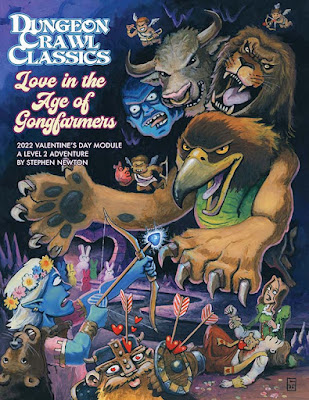 Released just in time for Independence Day on July 4th—thanks Asmodee (UK)—2022 Valentine’s Day Module: Love in the Age of Gongfarmers is an adventure for the Dungeon Crawl Classics Role Playing Game, the first released specifically for Valentine’s Day. Well, there is always 2023 if a Judge wants to run it on Valentine’s Day… Published by Goodman Games, it is a short, love and romance-themed adventure designed to be played by between four and six Player Characters of Second Level. Originally conceived and performed as ‘The Lost Heart of Valentinus in the Funnel Love” for Spawn of Cyclops Con 2021 with the winners of the ‘Love in the Age of Gongfarmers’ contest, it is mostly a puzzle adventure which will see the Player Characters encounter candy heart puzzles, feral fluffees, and other obstacles. However, given the love and romance theme of the scenario, it should be no surprise that it does touch upon the issue of consent. Although thematically appropriate, it is only a very minor part of the scenario, and the Judge is advised to consider her players’ comfort levels when portraying this in game. Another issue perhaps is that scenario has the potential to be bawdy in tone and when combined with the albeit minor issue of consent, 2022 Valentine’s Day Module: Love in the Age of Gongfarmers is probably best suited for mature players.
2022 Valentine’s Day Module: Love in the Age of Gongfarmers takes place at the Festival of Markhall, the demi-god of courtly love, inspirational messages, and mischief, the town of Terni. The scenario begins with the rather gruesome milking of some giant beavers or ‘gicastors’ for their musk before that musk is used as part of a big game well, ‘kiss-chase’. Thankfully the Player Characters only participate in the latter rather than the former and there are benefits in doing so—although only minor and only whilst they keep the romantic partners they gained during the fertility festival alive. There is potential here for the Judge to create some entertaining personalities that the Player Characters can encounter during this game, and it is perhaps a pity that the adventure does not include any. The scenario proper kicks off when the festival is interrupted. First when the now musk-less gicastors break free and go on the rampage and then wailing coming from, wait for it… the Funnel of Love.

The Funnel of Love is the main adventure site in 2022 Valentine’s Day Module: Love in the Age of Gongfarmers. Its title parodies two things. First, the amusement park ride consisting of a dark, narrow, covered passageway through which small cars or boats are mechanically conveyed, usually frequented by couples for romantic encounters. Second, the classic Character Funnel, one of the features of both the Mutant Crawl Classics Roleplaying Game and the Dungeon Crawl Classics Role Playing Game—in which initially, a player is expected to roll up three or four Level Zero characters and have them play through a generally nasty, deadly adventure, which surviving will prove a challenge. Those that do survive receive enough Experience Points to advance to First Level and gain all of the advantages of their Class. Now obviously, being for Second Level Player Characters, 2022 Valentine’s Day Module: Love in the Age of Gongfarmers is not a Character Funnel, but taking place in tunnel it is linear.

The source of the wailing is a young woman crouching over the body of a young cleric and would be partner. Devoted to a rival god, the young cleric has offended Markhall and so the vengeful deity has not only ripped out the cleric’s heart, but replaced it with a now blood-soaked mechanical bear who must constantly pump the organ to keep him alive! The clues all point to the Funnel of Love and so the Player Characters need to ride the boat through the tunnel, accompanied by both of the distraught lovers—including the clue-bearing heart-pumping bear. Here the love theme swings into high action. There are encounters with love bugs, a lovelorn bard called Ophelia who really wants to be sung to (and the Judge is encouraged to have the players sing rather than their characters), a giant chocolate bunny, and more. All of these encounters are nicely detailed and include staging advice, which is very necessary because for the most part, the encounters are puzzles to be solved. They can be defeated though force of arms, but the non-combat solutions are both far more inventive and fun than merely swinging a sword at the problem. Along the way, the Player Characters will find clues as to the nature of the adventure’s ‘End of Level’ boss and how to more easily defeat him. This includes various types of Cupid’s Arrows, which along with the cherub’s wee bow form the major treasure in 2022 Valentine’s Day Module: Love in the Age of Gongfarmers.

Physically, 2022 Valentine’s Day Module: Love in the Age of Gongfarmers is as decently done as you would expect for a title for the Dungeon Crawl Classics Role Playing Game. It is lightly illustrated in a cheesy style and the map fine. It needs a slight edit in places, but is otherwise easy to read.