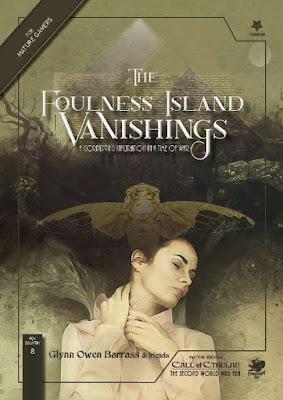 Unless the Keeper wants a scenario set in the United Kingdom early in World War II for Call of Cthulhu, Seventh Edition, there is simply no other reason for her to purchase or even want to run The Foulness Island Vanishings: A Corrupting Infiltration in a Time of War. The scenario has the potential to be adequate and provide an evening or two’s worth of reasonable horror roleplaying, nothing more, nothing less. However, such pretensions to adequacy are completely betrayed by the complete lack of editing, wayward development, and fixation upon high production values. High production values which are not always achieved. Yet if the Keeper is running a campaign set during World War II and is willing to overlook the scenario’s annoyingly silly failings and do the development necessary to get its to fit her campaign, then there is potential in The Foulness Island Vanishings: A Corrupting Infiltration in a Time of War. Until then, she should go and find a better scenario. There are plenty of those to find.

The Foulness Island Vanishings: A Corrupting Infiltration ina Time of War does not start well. Published by Stygian Fox, it cannot decide where Foulness Island actually is—is it on the northeast, east, or southeast coast of England? Its set-up is a relative gone missing, so beloved of Call of Cthulhu scenarios—and that is fine, but it adds another missing person’s case, as well as other set-up options, but never really develops these other options. It adds map after map to the point where you really can say that there are too many maps. Whilst the floorplans are all fine, there is not a single good map of the island itself. There are maps of one village, but not the other, and the map of the one village does not quite match the description given in the text, and arguably neither the numbered map for the Keeper or the unnumbered one for the players need to be as large. Then again, does the scenario really warrant a global map of the territories held by the Axis and Allied powers in 1941, let alone two copies of it? There are period photographs included of one the missing persons, but arguably they do nothing to add to the scenario. Then almost immediately as the scenario starts, it refers to an NPC that the Keeper is not told about and does not appear until a fifth of the way into the scenario. The writing all too often descends into travelogue as if describing where the Investigators are going, rather than providing simple descriptions of places that they can explore, and the Keeper can easily relate to her players. Further, for a scenario set in England in World War II, there are elements missing which would have added to its verisimilitude, in particular rationing and the presence of the army or the Home Guard. The scenario is set on an island and there is an image of a pill box included in the scenario, even if only one a mile away on the mainland. So why no army or Home Guard? Surely, they would have been stationed on the island in case of invasion. Lastly, there is a swastika used on the inside front cover, but the Nazis play absolutely no role in the scenario, so why is it there?

The Foulness Island Vanishings: A Corrupting Infiltration in a Time of War is set on Foulness Island, off the coast of Essex during 1941. Conscription has been imposed for the first time and it is suggested that the Investigators be above the age limit. One of the Investigators receives a letter from his aunt Lidia, who is staying on Foulness Island, but then hears no more. So he makes the journey out to the island to find out if she is okay. Other options include a private detective hired to locate one Harold Frazier-Snipe, who is also missing, or a holidaymaker or an ornithologist or an archaeologist. These options are relatively undeveloped, but potentially could be developed into pre-generated Investigators complete with motivations to be visiting the island. Foulness Island itself is flat, exposed to the sea, with marsh along the coast. It is notable for the Broomway, a low-lying path that connects the island to the mainland, but parallels the island for much of its length and is submerged at high tide. The inhabitants are in the main friendly and helpful where possible, and there is plenty of scope for the Investigators to explore the island. Perhaps following up on other disappearances, a dark legend, or visiting the standing stones at Foulness Point on the north end of the island. An appearance by a strange pig—along with other clues—points to the other end of the island and here the Investigators will encounter even stranger things going on. Ultimately, the Investigators will have a showdown with the antagonists behind it all, which can lead to their being captured, dealing with another very helpful if alien fellow prisoner, or an out and out free-for-all.

Physically, The Foulness Island Vanishings is very much hit and miss. The hits are some good handouts and reasonable artwork, as well as some decent floor plans. The misses include some poorly handled artwork and the plethora of unnecessary maps. Then of course, there is the writing and the layout… The former shows no indication of having seen sign of an editor, whilst the latter suffers from a lack of attention.

The Foulness Island Vanishings is a relatively short scenario, one which can be played in one or two sessions. There is pleasing sense of bucolic isolation and fear of invasion during time of war, and the scenario does add a local legend into the mix fairly easily. With the base plot in hand, once she has taken the time to understand what is going on—it is simple, but the book does not make that easy—the Keeper can easily do the development to turn into something more interesting. As a one-shot, develop the possible set-ups for the Investigators from those suggested, add some details about life under wartime, draw a better map of the island, and so on. Then again, why should she? Surely, this should have been done for her.