Cannibal Cults in the Clouds 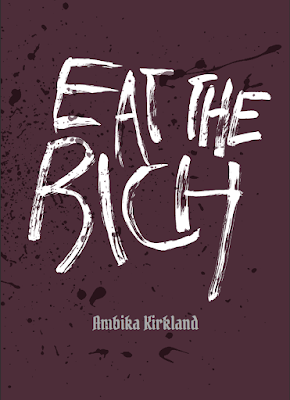 Eat the Rich takes place one hundred-and-fifty years from now in a horrible future in which the Earth has been overrun by flesh-eating humans who have fallen victim to ‘The Hunger’, an unknown apocalyptic-plague of unknown origins. Amongst the Ravenous, there are a few survivors who have proven to have an immunity to the virus and a few who have managed to get by without being bitten or infected. There are others who have managed to escape it all, the genetically and cybernetically-enhanced ruling class, who reside in a majestic cloud-piercing levitating spire from where they can look down upon the survivors grubbing away in the mud below. Many when they look up, they see the home of the Gods and wonder what life might be like above their squalid existence. Now a Cult wants someone to ascend to the Godspire and capture a God. The Assembly, the leader of the Cult, knows that survivors of ‘The Hunger’ assume the properties and memories of anyone they eat—dead or alive. If they can consume the flesh of a God, what glorious memories and abilities will they gain? Will they include the  knowledge they will help humanity restore the Ravaged Earth of this terrible future?

In Eat the Rich, the Player Characters will put aboard a lift-spacecraft which will take them to the Godspire. There they will explore its heights and its secrets, discover what has come of the Gods, and ultimately, find themselves threatened by something which will prove to be a danger to the whole of the world below. It is designed to be played by a small group of players. Four pre-generated Player Characters are provided, but there are guidelines too for generating them. This includes starting equipment, background, talents, and motivations. What will the Player Characters make of this strange, new, and vertical world? What will they discover and what secrets will they reveal? How will the Gods react to intruders from the Earth below?
As with other scenarios from Games Omnivorous, Eat the Rich is a system agnostic scenario, but it does not fit the genres of the previous entries in the line. Both The Feast on Titanhead, and The Seed are fantasy scenarios, but Cabin Risotto Fever and Mouth Brood are modern-set affairs, although they call all be easily adapted to other time periods. Mouth Brood though, can be shifted into the Science Fiction genre, whereas Eat the Rich sits firmly in that genre as well as the Post Apocalypse genre. Which means that it could be run using the rules for Metamorphosis Alpha: Fantastic Role-Playing Game of Science Fiction Adventures on a Lost Starship, Gamma World, or Mutant Crawl Classics Roleplaying Game – Triumph & Technology Won by Mutants & Magic, for example. Similarly, it is easy to adapt to any number of modern or Science Fiction roleplaying games. These include Call of Cthulhu, Seventh Edition or Chill, third Edition, as well as Alien: The Roleplaying Game, Traveller, and MOTHERSHIP Sci-Fi Horror Roleplaying Game. It would also really work well with Numenera. Of course, if Eat the Rich is run using any of the systems suggested, the scenario need not be set on Earth. Its set-up is simple, flexible, and easy for the Game Master to adjust as necessary. However, just like The Feast on Titanhead, The Seed, Cabin Risotto Fever, and Mouth Brood before it, Eat the Rich adheres to the ‘Manifestus Omnivorous’, the ten points of which are:

As we have come to expect for scenarios from Games Omnivorous, Eat the Rich adheres to all ten rules. It is an adventure, it is system agnostic, it takes place on Earth (although technically, it takes place above the Earth), it has one location, it has the one monster, it includes both Saprophagy—the obtaining of nutrients through the consumption of decomposing dead plant or animal biomass—and Osteophagy—the practice of animals, usually herbivores, consuming bones, it involves a voracious eater, the word count is not high—the scenario only runs to twenty-four pages, and it is presented in two colours—in this case, a dark red and silver on white. Lastly, where previous entries in the series have exhibited Rule #10, it is debatable whether or or not Eat the Rich fails to exhibit good taste—though perhaps that may ultimately be up to how the players and their characters react to it.

The scenario is self-contained, the location amounting to just eight locations and six out of the twenty-four pages that make up Eat the Rich. The Godspire is an odd mix of aesthetic and the technical, a luxury enclave beyond the comprehension of the Player Characters where the line between sufficiently advanced technology blends into magic. Some of the technology is described along with the handful of locations aboard the Godspire, as is the main threat aboard the floating spindle.

Eat the Rich is primarily a setting, a small environment awaiting the intrusion of the Player Characters, the inhabitants—the the ‘Gods’ of legend, the Technology Priests, and the scenario’s ‘monster’—reacting to their invasive presence. It requires a fair deal of preparation upon the part of the Game Master, primarily in terms of creating the stats for the various NPCs, monsters, and more. She is though supported by a pair of tables of random encounters and random inhabitants aboard the Godspire. She will also need to provide guidance for her players if they want to create characters of their own, or adapt the four pre-generated Player Characters to the system of her choice.

Physically, as with the other titles in the ‘Manifestus Omnivorous’ series, Eat the Rich is very nicely presented. The cover is of sturdy card, whilst the pages are of a thick paper stock, giving the book a lovely feel in the hand. The scenario is decently written and quite detailed in terms of its locations. The artwork has an odd feel to it, a strangeness which reflects the weirdness of the setting.

A combination of the television series, The Walking Dead and the films, Zardoz and Elysium, Eat the Rich is a strange mix of fragility and the unknown with the Player Characters being hunted up and down the Godspire. The setting and its strangeness do make Eat the Rich the most difficult of the ‘Manifestus Omnivorous’ series to add to a campaign, but easy to run as a one-shot.