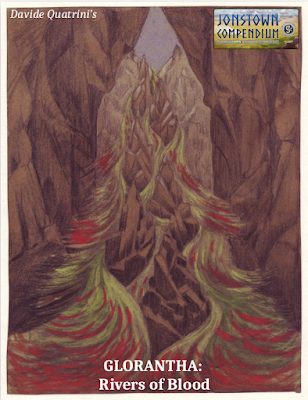 What is it?
GLORANTHA: Rivers of Blood is a scenario for use with RuneQuest: Roleplaying in Glorantha.

The layout is clean and tidy. It is art free, but the cartography is decent.

Where is it set?
GLORANTHA: Rivers of Blood is set in the central hills of the Grazelands.

Who do you play?
Player Characters of all types could play this scenario, but any Chaos-hating character or character capable of fighting Chaos will be useful.

What do you need?
GLORANTHA: Rivers of Blood requires RuneQuest: Roleplaying in Glorantha and the Glorantha Bestiary.

What do you get?
GLORANTHA: Rivers of Blood details an ancient Mostali cave where a Quicksilver dwarf has his alchemical laboratory. Madness and failure to restore the World Machine have led him to incorporate Lunar Chaos magic in his research and he has begun the source of a river in his cave. The Player Character, either members of the clan who live along the river or connected to the clan which does, are sent up river to determine why it has turned blood red and begun to kill cattle belonging to the clan.

The Game Master is provided with a short encounter table and details of the cave, plus stats for the Quicksilver Mostali. The cave complex consists of five rooms or caves, worked or unworked. The description of the cave along with its map takes up one page. The map is based a free-to-use map by Dyson Logos. (The blog is worth visiting as Dyson Logos provides a more interesting description of the cave than the author of GLORANTHA: Rivers of Blood does.)

The biggest problem with GLORANTHA: Rivers of Blood—outside of the fact that it is neither interesting nor good—is how the Player Characters get across a three-foot deep pool of contact poison. No advice or suggestions are offered to that end.
GLORANTHA: Rivers of Blood is at best a quick, mini-fixer-upper that a Game Master might be able to develop into something else. Probably not purchasing now that the scenario’s decidedly limp plot has been given away. It could be used as a quick combat encounter if the Game Master has absolutely nothing else planned. Otherwise it is nothing more than an uninspiring dungeon bash.

Cows with Chaos features is an amusing notion and utterly worth stealing from this review rather than the scenario being reviewed.