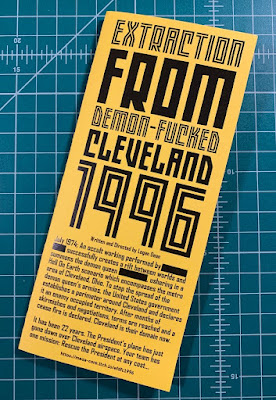 If you want to get some idea of what Extraction From Demon-Fucked Cleveland 1996 is like, take the soundtracks to two John Carpenter films—Escape from New York and Prince of Darkness—and crush them together, and you pretty much have the whole thing in a nutshell. Since nineteen seventy-four, the Ohio-state city has been under quarantine. Inside the closed off walls, the city environs have been a literal hell hole which has been the personal fiefdom of a demon queen. There is even a ceasefire declared between the United States of America and what is now enemy occupied territory. That was twenty-two and three hours ago. Three hours ago, the plane carrying the President of the United States of America was shot down over Cleveland airspace. The President is implanted with a biometric scanner which shows his life signs as well as approximate location. The Player Characters’ team is to enter the Cleveland Demonic Zone via Lake Erie to the northwest, make its way to the Demon Queen’s Moon Citadel. There they are to secure the President and escort him to the extraction point on the eastern of edge of the zone. There is no possibility of failure. If the team cannot extract the President, it is not getting out either… There will be no extraction for the team without the President.

The set-up for Extraction From Demon-Fucked Cleveland 1996 is simple and obvious. Replace gangs with demons and what you have is the plot to John Carpenter’s Escape from New York in this adventure from MegaCorp Games, nominated for the 2022 Ennie Award for Best Adventure. The sense of urgency is built into its plot, each area within the zone taking thirty minutes to cross and each encounter, combat or otherwise, takes fifteen minutes to complete. The environment is literally on fire and the ambient temperature is incredibly hot. Plus there are demons, none of which are going to be happy with an incursion by humans. Fortunately, maximum firepower is authorised in order to execute the mission.
The Player Characters are free to explore the Cleveland Demonic Zone as they want and very much if they have the time. Although not immediately obvious, there are advantages to doing so. Perhaps there will be opportunities to find out more about the Demon Queen’s activities in the zone or finding an easier way out of the Cleveland Demonic Zone. The Game Master is given a countdown clock to track the progress of the Player Character across the zone, descriptions of the various areas in the zone, details of the hostiles that they will probably face, and a table of possible encounters. And that pretty much is it. There are some redacted details in the scenario and everything for Extraction From Demon-Fucked Cleveland 1996 fits on two sides of a single sheet of paper. That is because it is a pamphlet adventure. It is also systemless.

Extraction From Demon-Fucked Cleveland 1996 can be played with any ruleset which can do an alternate nineties in which demons roam the earth—or at least Cleveland—and have done so since nineteen seventy-four. Savage Worlds would work, as would Modern AGE or the Cypher System. Depending upon the choice of system and the tone that the Game Master is aiming for the scenario can run as a grim and gritty mission or it can be run in a more Pulp style. All the Game Master has to do is create the demons following the descriptions given and perhaps some pre-generated Player Characters. These can be as clichéd as the Game Master wants depending on the type of game she wants to run. Once done, the Game Master has everything necessary to run a horror-tinged action-packed thriller.

Physically, Extraction From Demon-Fucked Cleveland 1996 is tidily presented. It needs an edit in place for clarity as the format means the author is being a little too concise in his writing.
However, is it any good? Is it good value for money? Is it even original? The answers to all those questions is a yes and a no. Yes, it is original because it presents a fun twist upon a familiar plot, but definitely no because that plot is lifted wholesale from a film. Yes, it is good value for money because it supplies a set-up and plot to which all the Game Master has to do is provide the necessary stats, but no because of the lack of originality. Yes, it is good because its tone is fun and the players are likely to enjoy the action and stealth affair to which this lends itself, but no, because of the lack of originality. Ultimately, it comes down to whether or not the players can overcome the lack of originality in Extraction From Demon-Fucked Cleveland 1996. If they can put it aside and buy into the action and tone of Extraction From Demon-Fucked Cleveland 1996, then the players are going to have a blast with this popcorn-powered, cheese covered horror thriller cover of John Carpenter’s Escape from New York.
Posted by pookie at 18:00