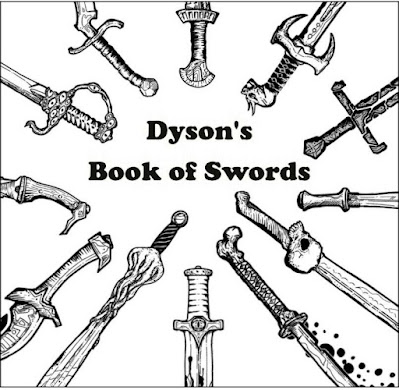 Dyson’s Book of Swords is exactly that, a book of swords from a writer best known for his cartography, especially his fantasy cartography. However, over the course of September and October 2021, he wrote and illustrated a series of entries on his blog under the labels ‘#Swordtember’ and ‘#Choptober’, each one describing and depicting a blade which could be added to the fantasy roleplaying game of your choice. Now following a successful Kickstarter campaign, all fifty entries in the series have been collated into the one volume and published as Dyson’s Book of Swords by Squarehex, better known as the publisher of The Black Hack. This little volume comes in an odd size—six inches square—and each sword is given a two-page spread consisting of a full-page illustration opposite its description. None of the descriptions run to more than two paragraphs each and the descriptions concentrate on telling the reader what the sword looks like, its history, and what its capabilities are. The numbers amount to no more than each blade’s to hit bonus, damage bonus, and against what, although some cases a special ability will also be referenced. In the main though, the language is not so much systems neutral as systems adjacent, meaning that any one of the fifty swords in Dyson’s Book of Swords will work with the fantasy roleplaying game of your choice.

Dyson’s Book of Swords is not arranged in alphabetical or indeed, any kind of order, but flip through its pages and you find Spite, a gladius-style currently wielded by the Elven mercenary, Rhador. It is a Short Sword +1 which becomes a flaming blade upon command and when it is aflame is +2 versus trolls, pegasi, hippogriffs, and rocs, and +3 versus treants and the undead. It casts light and ignites things as a torch. Rhador wields this weapon until he regains his family blade from his nemesis. Flip to another and the illustration and description is of the Last Blade of the Lich Shogunate, the last ‘perfect’ blade to be forged by the master swordsmith of the final Shogun. It has no name of its own, but is a +2 sword which also grants a bonus on saving throws versus all effects, spells, and abilities of the dead. Of the two, Spite is the more difficult blade to include, in part because it is wielded by a particular NPC and in part because it has such a wide range of enemies which it can affect. However, it raises the questions, “Where did Spite come from?”, “Who is Rhador?”, “Who is his nemesis and how he did come into possession of Rhador’s family blade?”, and ‘What are the abilities of Rhador’s family blade?” All these point to story possibilities, as does the Last Blade of the Lich Shogunate, but they are perhaps a bit more straightforward. These include “What was the Lich Shogunate?”, “Who wielded the Last Blade of the Lich Shogunate?”, “Who was the Last Blade of the Lich Shogunate made for?”, and “Who wields it now and where did she find it?”

Dyson’s Book of Swords harks back to the noughties and the slew of books for the d20 System with its supplements dedicated to just rings, just spells, just monsters, just swords, and so on. Fortunately, with the advent of Dungeons & Dragons, Fifth Edition, or even with the Old School Renaissance, there has not been the avalanche of books and supplements dedicated to singular aspects of Dungeons & Dragons-style gaming, and so Dyson’s Book of Swords does not fall into that category. Fundamentally, Dyson’s Book of Swords just keeps everything simple—illustration, description, and minimal stats. This means that its contents are compatible with just about every Old School Renaissance roleplaying game and retroclone, including Old School Essentials, Mörk Borg, Whitehack, and more. They would also work with 13th Age and the Dungeon Crawl Classics Role Playing Game, and even Dungeons & Dragons, Fifth Edition!