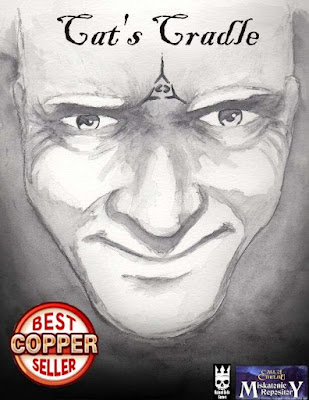 Setting: Jazz Age Boston
Product: Scenario
What You Get: Fifty-four page, 31.62 MB Full Colour PDF
Elevator Pitch: Suffer the little children’s wrath
Plot Hook: Nightmares linger in the wake of your descent into the Corbitt house.
Plot Support: Staging advice and two Keeper aids, twenty-four handouts, four new spells or spell variants, three NPCs, and one Mythos creature.
Production Values: Decent.
Pros
# Sequel to The Haunting
# Deep investigative dive into the backstory to The Haunting
# Advice on making the horror personal
# Advice for the Keeper to run Cat’s Cradle with other sequels to The Haunting.
# Focused investigative sequel
# Creepy, creepy children
Cons
# Needs an edit
# Scenario does involve children
# Better aids for the Keeper than handouts for the players?
# Photographic anachronisms?
# Good clue links to locations, but not from locations
# Better sequel than standalone scenario

Conclusion
# Solid sequel to a classic scenario, The Haunting, which both explores the backstory to the scenario and personalises the consequences of the Investigators’ actions in the Corbitt house.
# Creepy, creepy children should leave the Investigators with paedophobia
Posted by pookie at 18:00