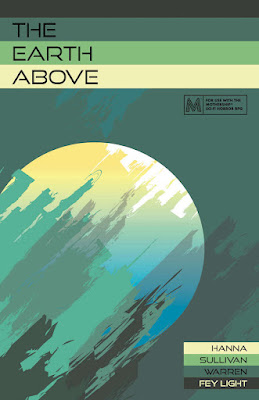 The Earth Above is a scenario for the MOTHERSHIP Sci-Fi Horror Roleplaying Game, the roleplaying game of blue collar Science Fiction Horror inspired by films such as Outland, Dark Star, Silent Running, and Event Horizon, as well as Alien and Aliens. Published by Fey Light, it is a short, two or three at most session scenario for a crew of Player Characters who either have their own starship or are travelling aboard one. It comes with a set-up, a setting, a threat (and possibly more), half-a dozen NPCs, two location maps, and of course, several tables to help the Warden run the scenario. It also comes with numerous reasons why the Player Characters might get involved. The primary reason is the ship that they are aboard is low on fuel and the nearest source is the world of Cormeia-9 or ‘Cor-9’. However, the world is under lockdown and there are emergency procedures in effect, so getting to refuel their takes on an extra challenge. Other reasons for their getting involved might be that they are colonists under lockdown; a team sent by a corporation to extract samples of the reason for the lockdown, an invasive alien species known as the Pestilence; a team of troubleshooters sent by the colony’s operating corporation in order to get it up and running again; and others. The result is an easy scenario to set up and drop into a campaign or run as a one shot.

The Earth Above runs to sixteen pages and is very neatly organised. So one double spread covers the background and reasons for the Player Characters getting involved, whilst the next describes the world and gives an overview of the facilities on world. This includes a note pointing out that the planet’s rotation is so short it disrupts a sleeper’s circadian rhythms, so adding to his stress, which is nice environmental effect of increasing a Player Character’s Stress. The next two describe the facilities and the mine in detail, the latter accorded a fully three-dimensional map, which adds a lot of detail and feel, but is still quite simple. Between them, the scenario’s six principal NPCs are given, including where they might be found, what they want, and what they have. Since the scenario is mainly set-up, these six can play a role no matter how the Player Characters get involved, whether it is simply to get fuel, get the mines up and running, or survive as colonists themselves. The last couple of pages are devoted to stats for various NPCs and creatures. Of the creatures, there are four types given and together they all have a very Xenomorph-like feel, a la Alien, Aliens, or even Alien 3. However, they are not exactly that, and in a one-shot, it is perfectly fine to have a creature not dissimilar appear as the threat. And anyway, those films are part of the inspiration for the MOTHERSHIP Sci-Fi Horror Roleplaying Game anyway. Rounding out the scenario are tables of things to be found in the hablocks, supplies, mercenary loadoats, and so on. All useful, as is the advice, which is kept to the point given lack of space, for the Warden to help her run the scenario.

Physically, The Earth Above is well presented, the artwork good, and the layout clean and tidy. All of which is packaged into a slim, but sturdy little booklet.

The Earth Above is a small, but smartly packaged scenario. In truth, its plot and set-up are draw from familiar inspirations, but they are adroitly handled with multiple different set-ups that work with the scenario and the familiarity should lend itself to some classic Sci-Fi horror moments. Easy to prepare and easy to run, The Earth Above is there for when the MOTHERSHIP Sci-Fi Horror Roleplaying Game, the roleplaying game of blue collar Science Fiction Horror Warden wants to serve up some unfussy, unpretentious Sci-Fi horror that is easy to buy into because everyone knows the tropes.